A Historical Overview of Murals

HomePainting A Historical Overview of Murals 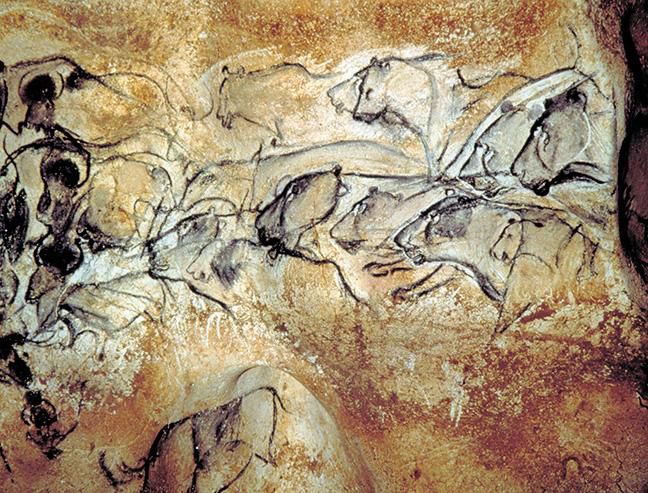 Murals are broadly defined as a painting or other work of art executed directly on a wall, ceiling, or other permanent surface. One unique aspect of murals is that the physical architecture of the surface is incorporated into the artwork. The earliest known murals existed in the Paleolithic era, and were discovered in caves in southern France, circa 30,000 BC. Other historical examples of murals are Egyptian hieroglyphic tomb paintings, Minoan palaces, Ajanta caves, and in the city-state of Pompeii. The Marouflage technique of attaching painted canvases to walls, dates back 3,000 years, and is an early precursor to the modern method of wheat-pasting.

During the Middle Ages, murals were typically executed on dry plaster. The 500-year Moorish occupation of Spain brought with it artistic and aesthetic influences, such as zellij, or geometric patterns based on mathematical formulas, which ultimately influenced European art during the Renaissance period. In the 14th century, Italian painters developed the technique of fresco secco, murals painted on wet plaster — a significant evolution in the quality of the artwork. Among the famous murals produced during the Renaissance period are Leonardo Da Vinci’s “The Last Supper,” and Michaelangelo’s “The Creation of Adam,” “The Last Judgment,” and the ceiling of the Sistine Chapel. Because artists were often supported by rich, politically-powerful patrons, such as the Medicis, and/or commissioned by the Catholic Church itself, many of the classical works of the Renaissance period reflect Christian themes, including a fascination with Greek Orthodox Christianity which developed after the fall of Constantinople to the Ottoman Empire. However, the renewed interest in Greek ideas and a burgeoning intellectual and artistic movement led to the establishment of humanism in the 15th century, which eventually spread throughout Europe and moved away from the Church as the center of religion, politics, and culture. 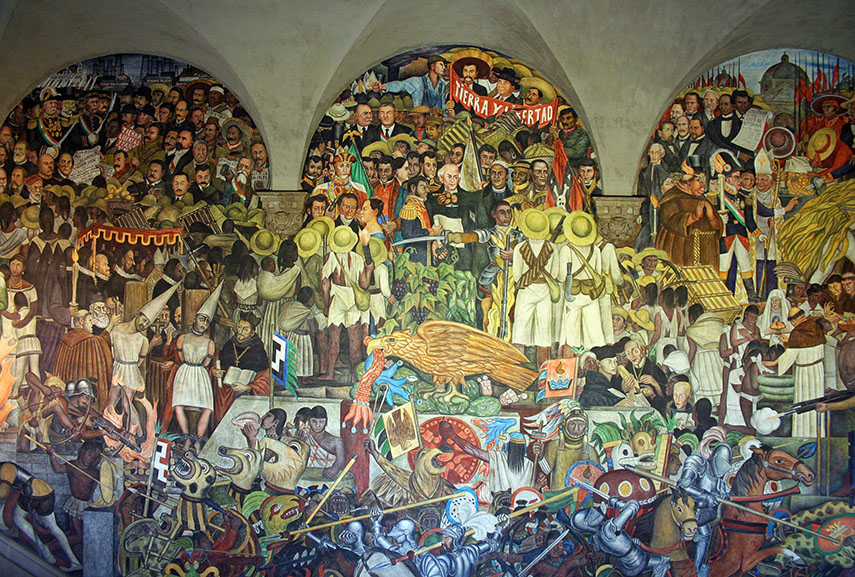 In the early 20th century, the Mexican mural movement associated with Diego Rivera brought a new level of sophistication to murals, drawing influences from Cubism and Post-Impressionism, as well as incorporating social and political commentary–which had often been suppressed in Europe. Rivera helped to popularize murals throughout Mexico, Central America, and the United States, and his works began to reflect a radical leftist political consciousness as well as traditional Aztek influences.

The Mexican mural movement’s focus on social and political messages–initially sponsored by the government following the 1910 revolution–in turn became a primary influence on the Chicano art movement in the 1960s — a Mexican-American effort to blend post-colonialism ideologies with pre-Colombian traditions, and a distinctly Chicano identity.

Photo: The Wall of Respect

Also in the 60s came the African American community mural movement. The main inspiration for this movement was the Civil Rights and post-Civil Rights liberation struggles and the focus on cultural and artistic aesthetics of the Black Arts Movement and Black Panther Minister of Culture and artist Emory Douglas. The community mural movement began with the Wall of Respect in Chicago, which was revolutionary in not just its depiction of black icons, but also in the sense that the community shared collective ownership of the work. The Wall of Respect led to many similar Walls in Chicago, many painted by William Walker, and a surge in community-oriented murals in many major American cities, including Detroit, Los Angeles, San Francisco, Portland, and St. Louis.

The community mural movement was concurrent with what has been called by non-practitioners “the modern graffiti movement” (practitioners often don’t call themselves graffiti artists, preferring the terms “style writers” or “aerosol artists”), which began in Philadelphia and New York, and utilized the medium of spray paint, as well as previously-uncommon surfaces: subway cars, handball courts, freeway underpasses. The movement’s origins are in guerilla-style, unpermitted walls and initially revolved around tags identifying the artist, such as Coco 144 or Lee 163d, but eventually evolved into the addition of elaborate calligraphic scripts, characters–including Yosemite Sam and Vaughn Bode’s Cheech Wizard–and vibrant, multicolored outlines and backgrounds. A particular evolutionary step was the utilization of “fat caps” by a NYC writer named Super Kool 223; the wide nozzle allowed for broader sprays and thicker letters, much as a thicker paintbrush covers more surface area. The styles evolved constantly and continuously, and writers formed crews–both to protect and distinguish themselves from other crews, and also to help navigate an environment with very territorial street gangs. 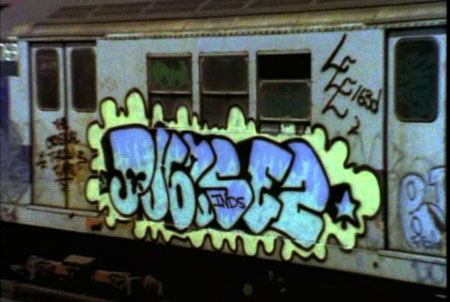 The first graffiti art exhibition, in 1972, was reviewed in the New York Times, which led to further exhibitions and interest from art collectors and the next new trend. Throughout the 70s, graffiti arts continued to muralize trains and walls, and several of the more talented writers had also begun doing canvases with the aerosol medium.

Initially a movement in and of itself, the aerosol art movement became identified with the emergent hip-hop culture in New York, through pioneering writers like Phase 2, who were also b-boys, or hip-hop dancers. As pioneering DJs like Kool Herc, Afrika Bambaataa, and Grandmaster Flash became local celebrities, artists like Phase 2 added graphic design to their resumes, making flyers for the DJ parties.

Despite its artistic and aesthetic innovation, the aerosol art movement existed on the margins of society, and was countercultural to the core. Unsurprisingly, there were consequences to pay. Police would often beat anyone they found with spray paint, sometimes painting the writer’s face with it. Civic outrage against vandalism led to fines (and eventually, prison sentences). New York’s Metropolitan Transit Authority spent tens of millions of dollars buffing out trains; by 1977, the subway era had come to an end, causing some artists to move on to other pursuits, while others, like Lee Quinones, began doing murals on handball courts.

In the 1980s, as hip-hop expanded from a NY subculture to a global movement, aerosol art was considered one of its four core elements. Its status in pop culture was assisted considerably by the publication of two coffee-table photography books, “Subway Art” and “Spraycan Art,” and by the movies “Wild Style” and “Style Wars.” “Subway Art” focused on the amazingly innovative guerilla-style public art productions of NYC’s aerosol artists, which ranged from self-congratulatory, self-reverential pieces based around lettering styles, to abstract works in which backgrounds and overall composition were elevated in importance. “Spraycan Art” documented the growing international popularity of graffiti-style art and aerosol murals, as writers from the Bay Area to Europe emulated–and sometimes even surpassed–their artistic inspirations. The documentary “Style Wars” personified several iconic writers, while “Wild Style” showed all four core elements of hip-hop, and also contained a subplot which quite literally depicted the seduction of street artists into the mainstream art world.

Aerosol-style calligraphy featured promInently in the 1984 TV show “Graffiti Rock,” which originated out of NYC’s WPIX and aired nationally on CBS. Conceived as a hip-hop version of “American Bandstand,” its logo boasted wild style lettering and was used as a backdrop on the set. The show also featured artwork by Brim. “Graffiti Rock” took its title from an event curated by photographer and filmmaker Henry Chalfant, the co-producer of “Style Wars” and co-author of “Subway Art,” and “Spraycan Art.” Yet even though the show got good ratings, “Graffiti Rock” was inexplicably not picked up for distribution–thus ending the opportunity to present hip-hop’s all of cultural elements together. An interesting sidenote: the show’s producer, Michael Holman, went on to write the screenplay for the major motion picture “Basquiat,” about the life of artist Jean-Michel Basquiat, who had started his career as a street artist known by the pseudonym “SAMO.”

By the late 1980s and early 1990s, there was much interconnectivity and overlapping between the community mural, street art, and graffiti art subcultures.

In the Bay Area, San Francisco’s Mission District emerged as a mecca for murals, many of which were produced under the stewardship of the Precita Eyes organization. The anti-apartheid movement produced an outpouring of politically-themed murals and characters, and in 1992, Spie and Dream of the TDK crew launched a protest campaign against the anniversary of Colombus’ voyages, called “500 Years of Resistance.” The campaign coincided with an exhibition called “No Justice, No Peace,” which addressed police brutality in the wake of LAPD’s beating of Rodney King.

During the 1980s, graffiti-style muralists were part of the Fresh Fest, one of the first national hip-hop tours, and Futura 2000 live-painted backgrounds and designed graphics for The Clash. Artist Keith Haring–who created a series of iconographic chalk murals inside New York subway stations, rose to fame in the art world, and designed a series of watches for Swatch (which are now collector’s items). Aerosol veteran Haze designed iconic logos for EPMD and Def Jam, and graffiti-style cover art began to appear on rap records by Mantronix and Just-Ice (Gnome and Gemini), the Boogie Boys (Phase 2), and others. This period was also notable for graffiti-style calligraphy and characters which were painted directly on jeans and denim jackets–making them, in effect, personalized murals which spoke to the cultural identification with hip-hop. 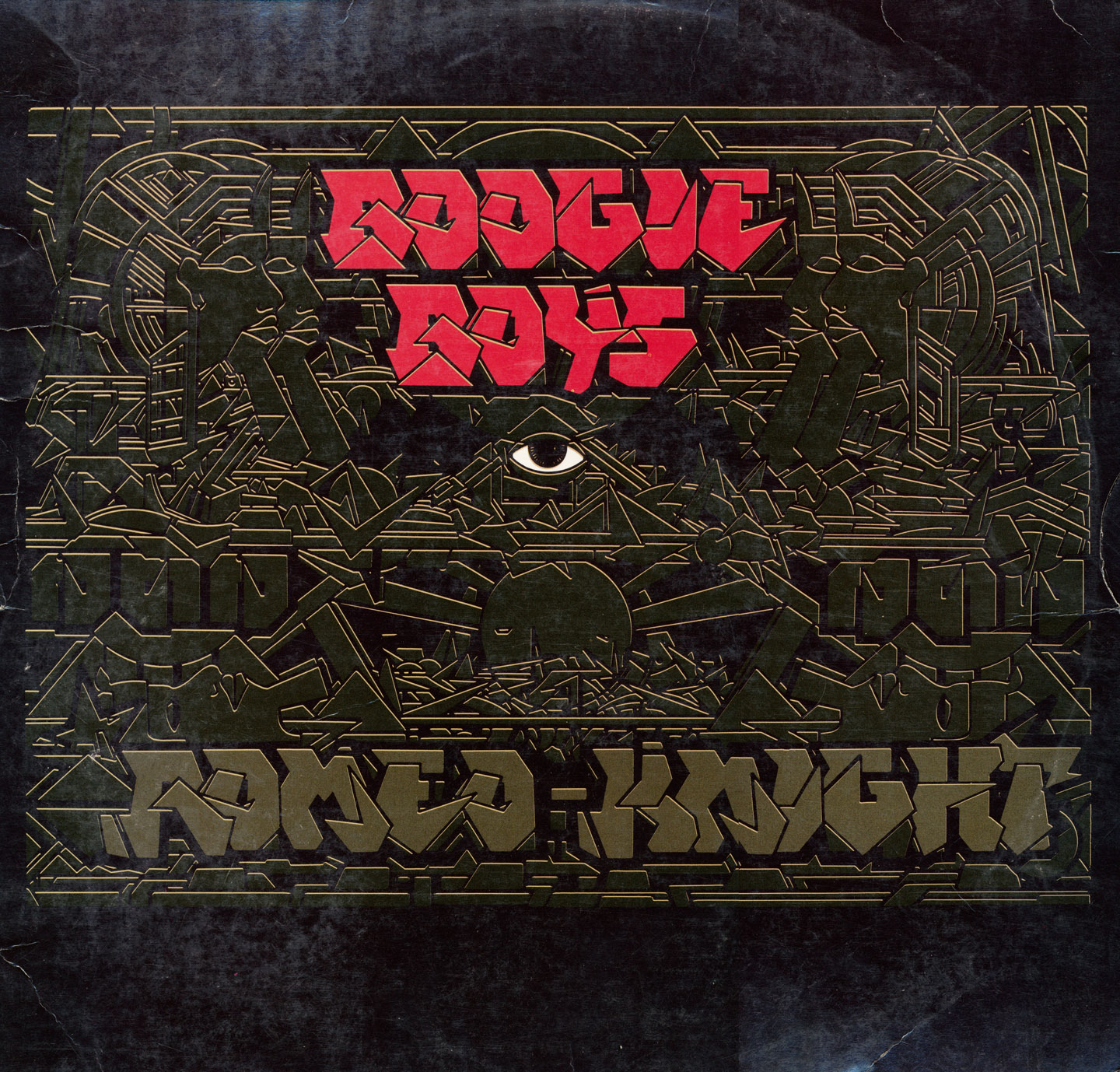 In the 1990s, Dream TDK painted backdrops for KMEL’s annual Summer Jam concert, and Doze TC5/GM5/RSC frequently live-painted at hip-hop and turntablist shows. The “Wild Style” logo–originally inspired by a subway mural by Dondi, and painted by Zephyr, Revolt, and Sharp for the film–was appropriated for a reissue series buy hip-hop label Wild Pitch.

Also in the 1990s, several graphic designers with muralist backgrounds moved into hip-hop fashion, including Haze, Marc Ecko, Futura, Doze, and others, while the graffiti aesthetic informed product lines of companies like Conart, Third Rail, 594 Gear (a reference to the anti-graffiti statute in the California Penal Code) and PNB. Magazines like the International Graffiti Times, Stress, 4080 and On the Go regularly covered aerosol-based muralists, as did The Source, while a series of documentary films called “Graffiti Verite” further documented the culture and its history. Many aerosol writers took up airbrushing or tattooing as a way to pay the bills. By the decade’s end, SF street artist Barry “Twist” McGee was exhibiting at SFMOMA, Futura was designing album covers for Mo’ Wax, Shephard Fairey was wheat-pasting “Obey,” and UK-based artist Banksy evolved his agitprop art from spray painting to stenciling.

During the first two decades of the new millenia, muralism has continued to be a viable and innovative form of public art. In 2002, Ivor Miller published the definitive academic account of graffiti and muralist culture, “Aerosol Kingdom,” and muralists have held court from the Oakland Museum of California to the Block Museum in Chicago to Sotheby’s in London to the West Bank of Gaza. It’s not uncommon for well-known mural artists like SF’s Apex to land big commissions for corporate entities, while still doing smaller neighborhood projects. The list of current muralist collectives is far too long to list, and there are numerous muralist organizations, including the Community Rejuvenation Project, which have incorporated as non-profits. 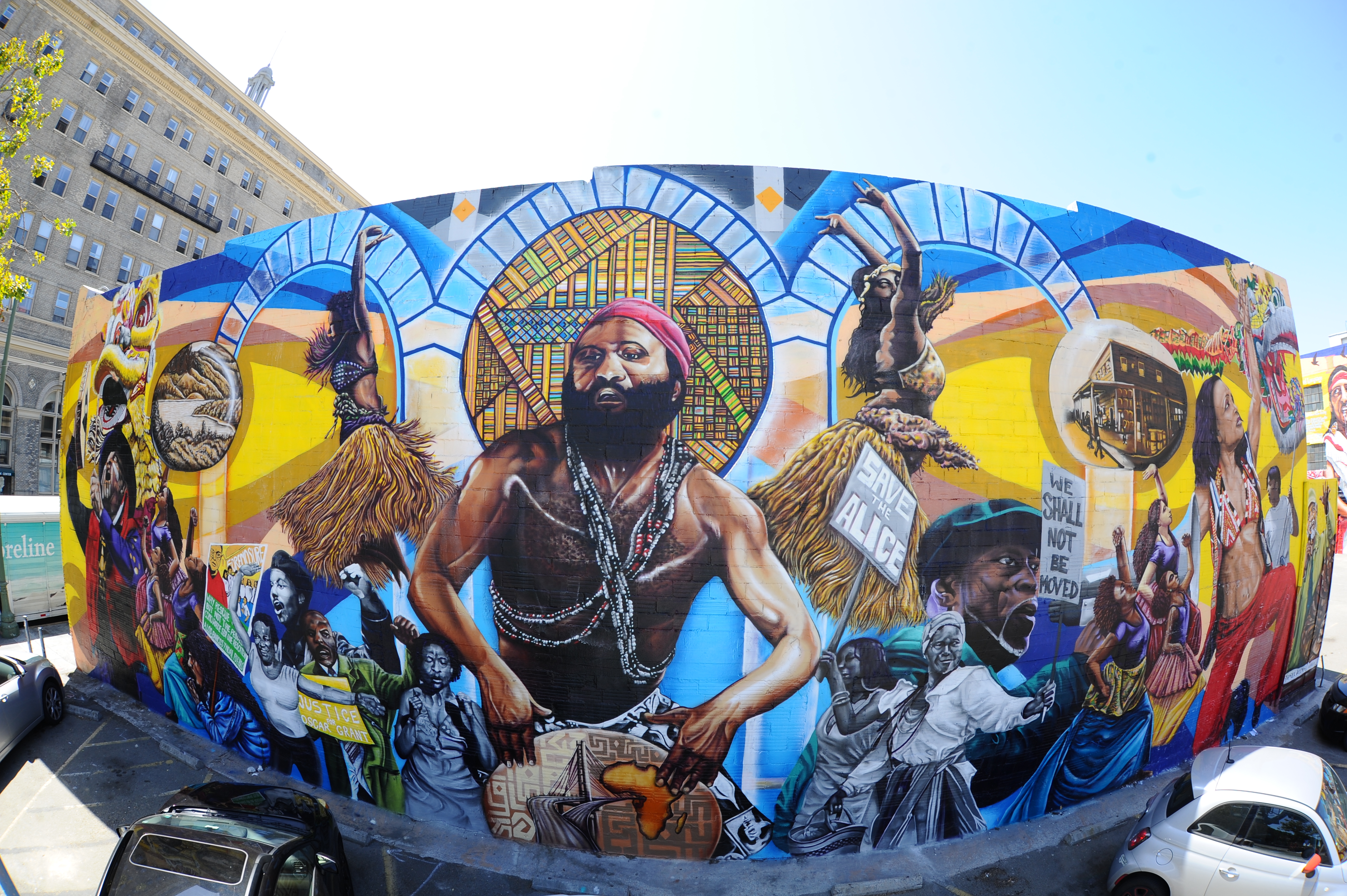 As part of the street art, community mural, and graffiti movements, muralists have made further inroads into the public art sector and mainstream art world, often while maintaining street credibility and a connection to the communities they represent. The mural movement has become a global one, well-represented in its longtime centers like New York, Chicago, Philadelphia, Detroit, St. Louis and the Bay Area, but also in Yokohoma, Tokyo, Montreal, Halifax, London, Edinburgh, Melbourne, Sydney, Berlin, Mexico City, and Sao Paulo. Writing on the walls is one of humankind’s earliest cultural traditions, and it shows no signs of stopping as we move further into the 21st Century.