Creative placemaking is a relatively new and still-evolving term which has recently become a buzzword in creative arts circles. A brief history of the term’s use since 2010 and some case studies of current practices was compiled by Metris Consulting. Creative placemaking is both a cultural policy and a method for community development, and can center equity initiatives which address historic underdevelopment of disadvantaged populations.

The National Endowment for the Arts uses the following definition: “In creative placemaking, public, private, not-for-profit, and community sectors partner to strategically shape the physical and social character of a neighborhood, town, tribe, city, or region around arts and cultural activities.”

A similar definition is used by the Project for Public Spaces, who state that arts-based placemaking “is an integrative approach to urban planning and community building that stimulates local economies and leads to increased innovation, cultural diversity, and civic engagement. Since creativity fuels place value, the benefits of using arts and culture to tap into a place’s unique character extend well beyond the art world.”

A third definition is provided by Art Place America, who say creative placemaking is “the belief that artists and arts organizations could literally shape the social, physical, and economic characters of their communities.”

Murals create a tangible sense of place, destination, resulting in increased foot traffic while adding color, vibrancy, and character to urban environment. Murals contrast the negative mental health effects of concrete and asphalt, and can have therapeutic benefits for mentally-ill and homeless populations. Additionally, multiple murals in a retail corridor can creates a visible sense of being in an an arts district or cultural corridor. 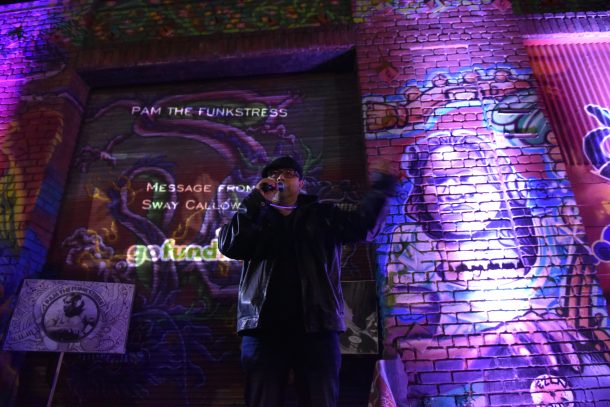 DJ Alex Mejia addresses the crowd at a tribute to Pam the Funkstress, at the site of a CRP portrait of her.

While some placemaking initiatives have raised concerns about advancing gentrification, by centering equity as a core value and integrating community stakeholder input and participation into the process, the opposite outcome can be emphasized and achieved.

Murals which reflect the communities they are located in can advance social and cultural equity by upholding diversity, creating a sense of inclusion into the built environment, and visibly highlighting the history of a neighborhood and/or the social, cultural, and political values of its residents. Murals are a particularly effective tool for messaging, which can take many forms, including:

In many instances, murals do all of the above. They are an essential aspect of creative placemaking, and can help create equitable and positive outcomes when best practices are followed.

An even newer term closely related to Creative Placemaking is Creative Placekeeping, which deepens engagement and community participation by offering ongoing, curated activities which are place-based. Murals which reflect community values, history, or culture inherently lend themselves to the idea of Creative Placekeeping. CRP murals have been featured in several music videos, major cable series, independent films, and even candlelight vigils for fallen DJ icons.