reposted from the Ashland Cherryland Garden & Arts Network (ACGAN) blog The Ashland Cherryland Garden & Arts Network and The Community Rejuvenation Project (CRP)  have nearly completed a week-long transformation project in South Cherryland, an unincorporated community on Hayward’s border. The blank and blighted A Street liquor store parking lot received some refreshed soil and wildflower seeds, while CRP produced yet another destination-creating mural for the East Bay. The final wall contains cultural references, sacred symbols, and meaningful characters, all of which… 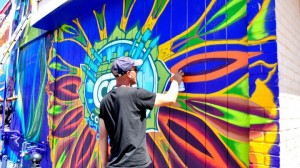 For Immediate Release – 8/30/2012(Cherryland, CA) The Ashland Cherryland Garden & Arts Network hosted a week-long grassroots community impact project August 18-24th, 2012. The “VibeUp on A Street” project served to transform a well-known trouble-spot: the AAs and N&M Liquor Stores on Hayward’s A Street, at the southern gateway to Cherryland. The cornerstone of the project was a full-wall Garden District-themed mural on the building, by the Community Rejuvenation Project (crpbayarea.org). This mural was the first of an 8-mural series…

For Immediate Release – August 14, 2012 (Richmond, CA) For the past few weeks, the Community Rejuvenation Project has been hard at work at the Greenway in Richmond, part of a collaborative effort with Urban Tilth and the City of Richmond. In addition to the planting of new gardens and the creation of artcrafted benches, the project includes new murals highlighting eco-friendly themes, such as an emphasis on alternate transportation and less dependence on fossil fuels; and more plants, producing… 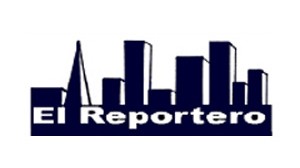 On August 26, SF student activists unveiled a 100 foot wide by 30 foot tall 67 Sueños Mural (67 Dreams) at 65 Ninth Street (between Mission and Market). This project was born from the dream of San Francisco migrant students looking to raise awareness of current immigration laws that neglect the realities of 67 percent of today’s undocumented youth.

CRP artists worked for several days on a mural upholding people’s land rights which drew a connection between the national foreclosure crisis and gentrification already beginning to creep through West Oakland. 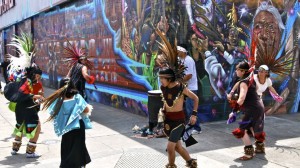 41st and International/Peace and Dignity

Located at 41st St. and International Ave., in the heart of Oakland ’s Fruitvale district, the “Peace and Dignity” mural spans almost two entire city blocks, making it one of CRP’s most ambitious to date. Conceived by CRP’s Desi W.O.M.E. and Mike 360, along with graffiti legends Phase 2 and Vulcan, and painted by Desi, Mike 360, Vulcan, Elijah Pfotenhauer, Pancho Pescador, Beats737, Abakus, Dora Chavarria and youth from the Fruitvale. Commissioned by the property owner Smart & Final and sponsored in part by Oakland’s Community Economic Development Agency (CEDA), the project took more than three months to complete. The mural features vibrantly-painted foreground characters representing indigenous peoples and native symbology: tribal elders, musicians, runners, the agave plant, a hummingbird. Subtle background calligraphy spell out the words “peace” and “dignity” – a reference to the sacred Peace and Dignity Journeys from Alaska to Panama which happen every four years.

As part of its “Healthy Lifestyles” campaign, CRP was commissioned by Richmond Spokes to create a mural inside their new Spokes Shop on Harbor Way. CRP artists Elijah Pfotenhauer and Desi W.O.M.E tied in Richmond landmarks such as the Richmond Plunge and the Craneway with images of gardening and diet along a bike trail. The mural debuted with the opening of the Spokes Shop and a community block party.

Many Bay Area based personages have been immortalized as characters in CRP murals. [nggallery id=1]

CRP has been inspired by the works of many seminal musical artists. Commemorating then in paint is a good way to acknowledge their amazing contributions. [nggallery id=4]