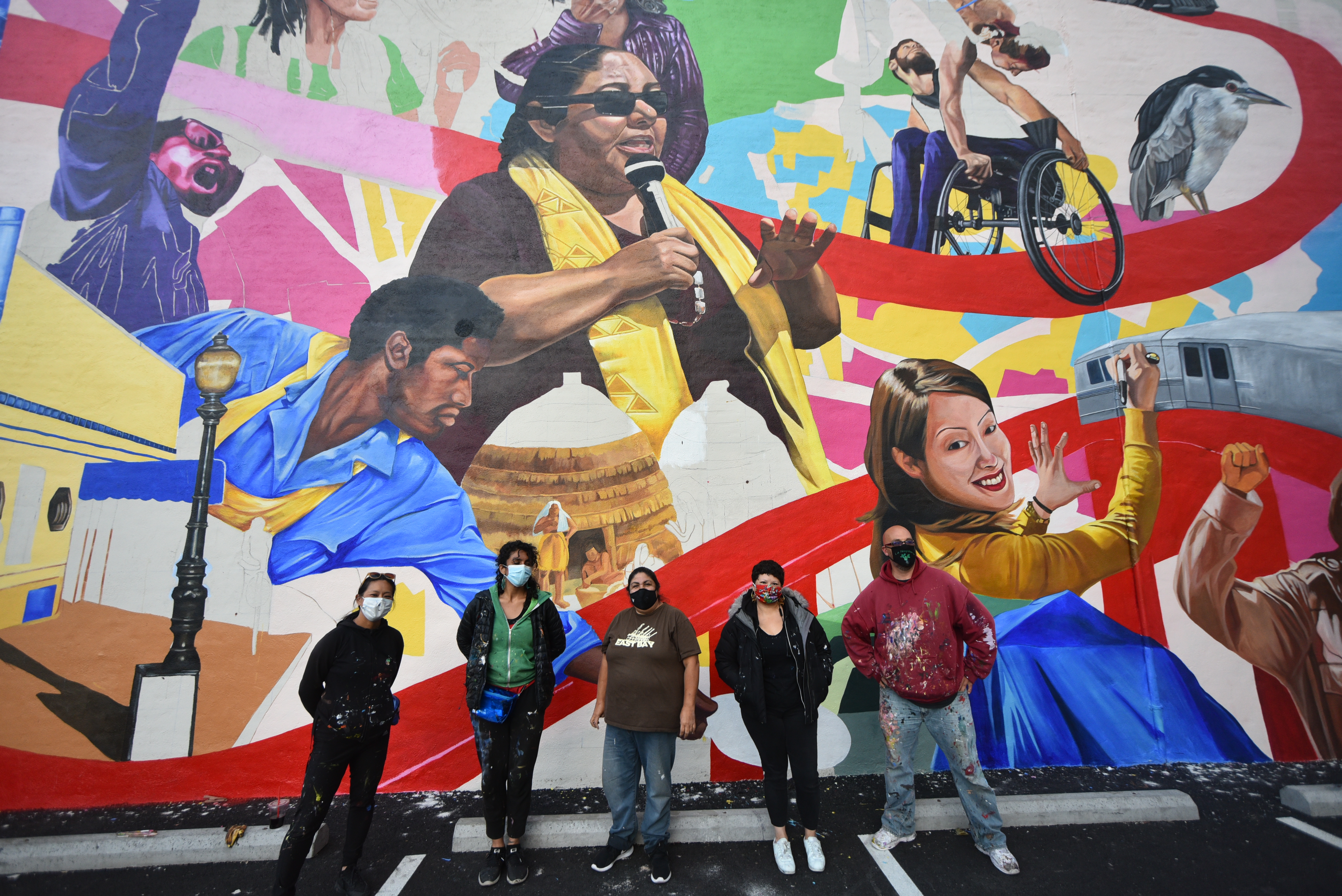 In the last couple of weeks, the AscenDance mural has turned a corner. What once was a bare and unremarkable wall now pulses with color, vibrancy, and life. Gridlines have become outlines; outlines have metamorphosed into distinct figures,  Details and backgrounds have emerged. The entire wall has taken on form, shape, and substance. Its new character is being slowly revealed, day by day, brush stroke by brush stroke. There is no going back  — only forward.

As the painting process has continued,  personages, personalities, and moods have begun to be revealed. Once-abstract images have taken on definition.  On the mural’s left side, people such as Corrina Gould, Lailan Huen, and Jane Kim are now startlingly present, alongside Black Panthers, Brown Berets, Axis dancers, traditional Ohlone thatched huts, and homeless tents. Themes of activism, multicultural diversity, and  the will to overcome oppression — represented by a ubiquitous redline along which  a locomotive and a BART train run —  are now tangible.

In the lower part’s middle and right sections, the redline diverts into a green  line which connects cultural practitioners from various ethnic traditions, wrapping around the four pioneering activists of The Greenlining Institute and SambaFunk drummer Theo Williams, before circling upward.

The middle and top sections of the wall are now emblazoned with dynamic images of motion and grace in various stages of illustration. Natural elements, such as trees, water, and sky, present a stark contrast to adjacent buildings, whose concrete, steel, and glass exteriors offer a cold, subdued feeling.

Down the street and up the block, the aftermath of weeks of turbulence and protests have left many storefronts in the immediate vicinity covered with plywood boards, over which many murals and more than a few tags have been painted — temporarily transforming a business and retail district into an outdoor art gallery. All this in the midst of a pandemic which has made social distancing the norm. In many ways, the whole experience has been surreal.

At this point in the process, it seemed apt to check in with Lead Artist Desi Mundo and assistants Marina Perez-Wong, Elaine Chu, and Priya Handa and get their thoughts on the mural’s progression.

“The left side’s definitely got the most progress,” said Mundo. “The majority of the left side’s coming in.” That being said, he noted, there’s still plenty of work remaining.

“I’ve been working on the swingstage. It looks halfway but a lot of it isn’t, because a lot of that’s primer.  That’s the scary part. We’re starting to see it come out, but I would say 75-80% of that needs a second touch.  That’s gonna be challenging. That’s also when the detail comes out.  Slowly but surely. If each person gets and image or two done per day, I think we’ll be finishing on track. …We’re gonna have to go pretty hard, but fortunately, the relief is coming. Dave, aka Dave Kim, is gonna show up. And that’s gonna be another talented  body on the wall. ”

Attention to detail is a must, he said, even though the sheer size of the concrete canvas makes that a daunting task. “We’re insisting that this be what a wall of this detail and size should be.  It’s gotta be high-caliber. No half-steppin’. We cannot half-step on any inch. We’re still using tiny brushes on this thing. I was using less than a half-inch brush today just to put in tiny details that probably no one can see, but they translate overall over time. Some things really take a long time and we have to give them their attention. It’s just a matter of getting everything in there.”

For example, he said, “You look at Elaine’s train and all of the little components to that, you look at all the feathers on the heron. And the wheelchair.  All of those spaces get that love, and that’s what makes it awesome.”

Perez-Wong likened the mural to a giant puzzle — the artists have to approach it one piece at a time. “I think the mural itself is a bit overwhelming because it’s so big. It’s pretty massive but it feels good. I think we’ve done a lot in a short amount of time. We’re making good progress.”

“It’s exciting to see it all come to life,” Chu added.  “What’s been great is we have such a fun team who love working together, and the energy’s great. We all know what we’re supposed to do, so, we don’t even have to talk, we just do it. We’re all in tune with each other. I guess when you work so closely with a group of artists, you just ended up telepathically working together.”

That telepathic sense includes Perez-Wong occasionally finishing Chu’s sentences, or the two “twins” sometimes speaking in unison. But it also extends to Handa, who’s also been working diligently and in artistic harmony with the other artists — usually without being overly talkative. Occasionally, the artists will retreat to the edge of the parking lot to view their work from a zoomed-out perspective, and exchange comments about what works and what maybe needs a little more work. The most amount of chatter comes at the end of the day, when the artists put away their materials and wheel the scaffolds to a fence to be chained for the night — an exercise which also requires teamwork and focus.

For Handa, this project has been “ a different experience, definitely, because (of) the height of the wall, the depth of content in the wall. and all the narratives that are being tied in. It’s been a really beautiful experience working with folks and understanding the stories, but it’s also been a really great learning experience. Every day there’s like a new challenge; How do we tackle that and how do we make that work?

“In this case, for example, when you’re working with something that’s so big, it reads differently when you’re on the ground. And the audience is on the ground.  They’re not up there. So keeping that in mind, keeping in mind the audience that will be reading this, viewing this and taking this in, how it’s viewed from that point.  And learning how to break that down so, that way, everything is being done optimally.”

The artists are definitely feeling a sense of momentum at this stage in the mural’s production process, she said. “that’s when the rhythm kind of picks up. It’s like in the beginning you’re kinda like okay, how are we doing this, what’s next, things are slow. But then there’s a pojnt where the rhythm just picks up. I always think about, like, man, if i was just painting one canvas piece, it would take like a week. But if it’s on a wall, you’re going faster because there’s a huger component to it.”

What has resonated particularly with her are the stories and narratives the wall is telling, and how they become interconnected through the painting process. “Honoring the folks that have been here before, and are here present(ly). Especially because people that have been coming by the wall relate to the wall, we’ve been seeing folks like Corrina.” (Gould had visited earlier in the day, and marveled at her portrait which she was seeing for the first time.)

Another point of resonance, she added,  is “a member of the Black Panther Party handing out the free breakfast. It’s really kind of important to see because it is a legacy (that relates to) everything that we see every day now.  Especially with BLM and seeing how we put up art real quick, and how we’ve been doing mutual aid. This wall sort of reminds me that we’ve been doing mutual aid way way way before Corona. It’s a way of lifestyle. It’s one of the things that really hits home.”