This story really touched our intern, Jordynn. “Reading this story sparked a lot in me because it stands for something many people in our city believe in. Being that CRP is located in Oakland we want to show all different aspect of political murals from different backgrounds to express what we stand for.” Indeed, murals have the power to tell our history, honor our heroes, and acknowledge things in our past that are left out of our school history books. 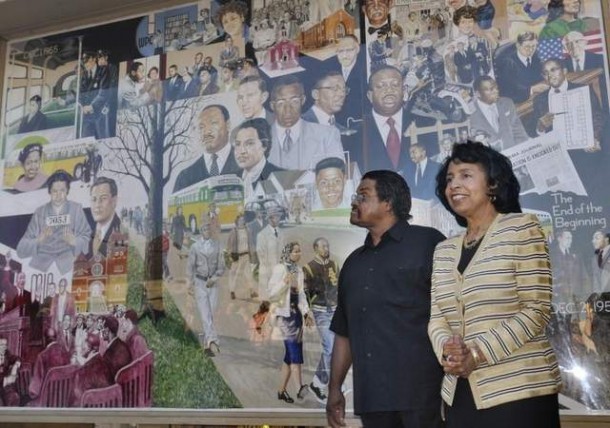 They need to not only see it, but read it, and understand the sacrifices that have been made to get to where “we are today,” said Vincent Morgan, a muralist from Tuskegee, commenting on the newest mural unveiled at Alabama State University on Sunday.

The dedication for the sixth mural in the National Center’s “Journey to Freedom” series is called “Over My Head, I Hear Freedom in the Air,” by Vincent Morgan. It was dedicated at ASU’s Center for Civil Rights and African-American Culture, and highlights many of Montgomery’s contributions to the civil rights movement.

The murals reflect the National Center’s mission to use art and other forms of African-Americans’ cultural life to teach and inspire, according to the university. The latest mural was created to honor civil rights greats and continue their legacy.

The mural is important for those in Montgomery, said Howard Robinson, ASU’s archivist.

“I think if you look at the mural, you get a different feel if you look at it close up and far away,” he said. “In both instances, I think you get the sense of, to me, what the message is, which is that there is a lot that occurred under this umbrella that we understand as the bus boycott.”

“All of these elements you see in this mural … it’s an appropriate format because it allows you to look at all of these different episodes and individuals who really contributed to making the bus boycott successful,” Robinson said.

Morgan said students need to “have a visual connotation of what it’s like in our struggles so they don’t take it for granted.”

The first five mural panels in the “Journey to Freedom” series were introduced to the public Sept. 17, 2006. A future mural will be called “Student Protest.”

Feagin said the recent mural has great meaning because he was a student at Alabama State, and was here when King was here in the 1950s.

“I dreamed of this as the march progressed and the movement progressed,” he said. “I wanted to … show how Alabama State had a part in this movement, and it grew with the movement.”