Fresh writing on a wall at the edge of Cairo’s Tahrir Square shows artists battling with the police for control of a wall that was covered by a famous revolutionary mural until late Tuesday.

As the Cairene journalist and blogger Soraya Morayef reported on Thursday, many Egyptians who took part in the 2011 street protests, and the battles with the military rulers that followed, were outraged this week when the authorities suddenly painted over an elaborate aerosol mural dedicated to the martyrs of the revolution at the edge of Tahrir Square.

This is happening now. Looks like Mohammed Mahmoud martyr writing will be painted over next. 🙁 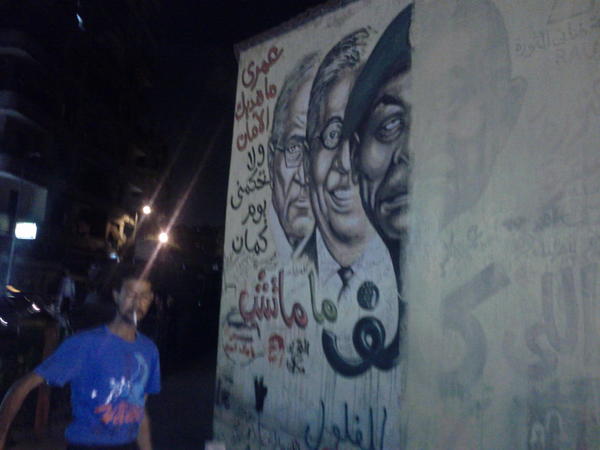 A video report on the aerosol battle in Cairo, produced by the film collective Mosireen.

In a post headlined, “Erase the Writing as You Want, You Cannot Erase History,” the blogger Zeinobia included a Flickr slideshow of the mural to remind readers of what had been lost.

As Zeinobia explained, the mural was “painted right after Mohamed Mahmoud clashes in November 2011 and in February 2012 after the horrible Port Said massacre.”

Ms. Morayef, who has written extensively about the revolution’s street art, and the mural on Mohamed Mahmoud Street, previously, posted a detailed look at the new images on her blog, Suzee in the City, on Thursday. She also observed:

It’s as if, step by step, we’ve been moving towards a clean state, where nothing ever happened. No policemen have been sentenced for the murder of January 25 protesters, and the security chiefs exonerated due to lack of evidence that they ordered the killing of protesters (because videos and photographs and eye witnesses don’t count).

In this attempt to re-write history and change facts so that future generations assume the Muslim Brotherhood started the revolution and remained loyal to it, and the army never laid a finger and didn’t shoot a single bullet at those bad bad protesters, I assumed the public memory would allow the painting over of the Mohamed Mahmoud mural. With almost two years of political fatigue, indifference and distraction; I can hardly blame them.

But what ensued was surprising: yesterday, artists, activists and members of the Ultras as well as 6 April returned to the walls and created new pieces over the freshly painted walls. What we lost was a beautiful work of art; what we have gained is fresh fury and reignited debate.