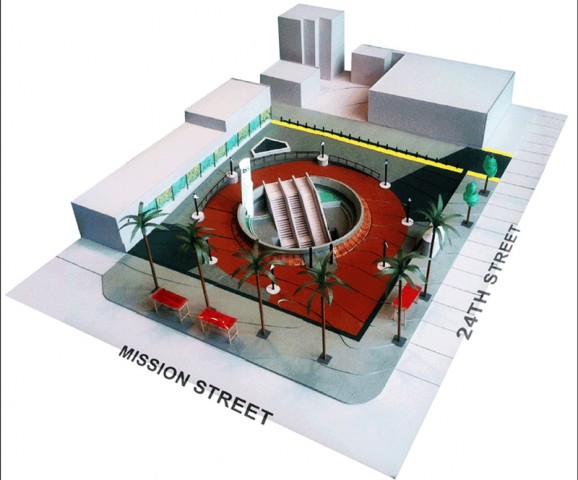 The Mission district of San Francisco has long been one of the prominent areas in the country for murals. It’s gentrification in the past decade has never been more evident than in the re-design plan for the 24th Street “Plaza.” Not a single artist artist for the project is from the Mission. And its not like there is a shortage of talent. BART officials, notoriously out-of-touch with community, claimed that sufficient local outreach was conducted. Still, el Tecolote reports that every resident at the meeting wanted the works to be done by local artists. At the end of the day, it seems like the project is moving forward despite the community’s concerns.

A model of the proposed redesign for the 24th Street BART Plaza. Courtesy of BART.gov

Final plans for the facelift of the South-West BART station plaza at 24th and Mission streets were met with intense concerns from the Mission community.

Over 70 people filled the community room at the Abel Gonzalez Apartments on Capp Street, Sept. 19, to see the final design presented by BART and the San Francisco Planning Department. The three artists chosen for the project gave slideshow presentations of their previous public art projects.

But while everyone was satisfied with the plaza design and impressed by the artists presenting their work, the meeting quickly turned into an impassioned exchange about the soul and culture of the Mission District.

“I’m disappointed there aren’t any Mission artists among the group,” said Miguel Bustos, the first resident to raise his hand. “As a taxpayer, I would love to see local artists be part of this.”

Bustos’ comment was echoed throughout the meeting as everyone who spoke expressed disappointment that Mission District artists were not selected. Artists Kipp Kobayashi and Anne Marie Karlsen are based in Los Angeles, while Charles Sowers is from San Rafael—though he did he reside in the Mission some years ago.

“The Mission is known internationally for its murals. People come here from all over the world to see art here,” said one man, who has lived in the Mission for 30 years. “With all respect to the artists here—I like all their work, but why do you need to bring them from LA, when we have artists right here?”

BART planner Rube Warren and Regina Almaguer, a consultant, said the process was transparent and that proper outreach was made to local artists, but only two submissions had been received from the Mission for a durable work of public art that should last at least 25 years.

A sidewalk tile mosaic of Quetzalcoatl made by Precita Eyes over 10 years ago was also brought up. The mosaic was supposed to be installed on the Muni stop bulb-out but was inexplicably dropped from the plans. It has sat in storage ever since.

BART Director Tom Radulovich said that BART had no authority over that project, as the sidewalk fell under the authority of the San Francisco Planning Commission and the Municipal Transportation Agency, which commissioned that project.

Tempers continued to flare as one young man said that BART should to be careful about what artwork they choose as it could be vandalized by those unhappy with it. Later, another man from the commission, who seemed irritated, asked residents if they would prefer BART “to just abandon the project completely.”

But in the end, cooler heads prevailed, as no one in the room wanted the station project derailed.

It was agreed upon that the community, along with assistance from Supervisor David Campos and State Assemblyman Tom Ammiano, would work with BART in moving forward with the process. Ilaria Salvadori, from the Planning Department also said they would look at ways to incorporate the Precita Eyes mosaic in the Mission Street corridor.

Leaving the meeting, Bustos came away thinking that Mission residents coming together will make the difference on how things will move forward.
“We will be working with our leaders to make sure the community has a say on how money will be spent and the art that is chosen,” he said.
Construction for the $2 million station plaza facelift is scheduled to begin in January and be completed by Oct. 18, 2013.