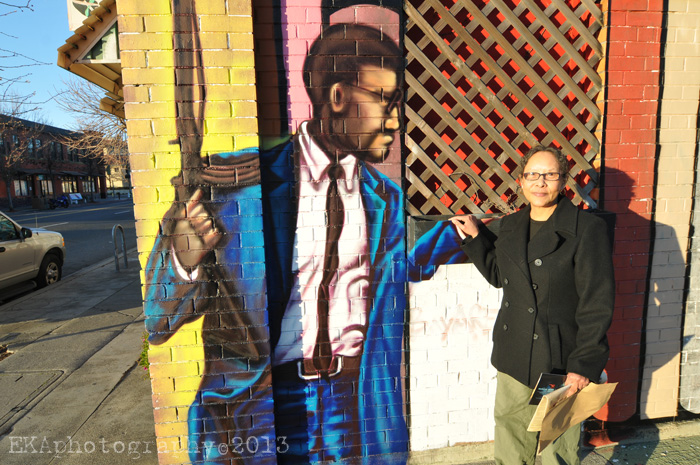 (Oakland, CA) The Community Rejuvenation Project, an Oakland-based collective of mural artists dedicating to the beautification and upliftment of urban communities, announced today a Community Painting Day, to be held 12pm-4pm at Marcus Bookstore, 3900 MLK Way, Oakland, CA, on March 30, 2013. Community residents are invited to help paint book titles on the wall adjacent to the bookstore, which CRP has previously decorated with vibrant portraits of Malcolm X, Marcus Garvey, and Marcus Books founders Julian and Raye Richardson, as part of a work entitled “Abundant Knowledge.”

The Marcus Books mural came about through the efforts of Baba Jahahara Amen-RA Alkebulan-Ma’at, who noticed tagging on the sides of the building while filming a video for green hip-hop/food justice group Earth Amplified. Alkebulan-Ma’at contacted current owner Blanche Richardson and proposed a mural project to discourage taggers and educate the community. Alkebulan-Ma’at then contacted the city of Oakland about funding for façade improvements, but was told not only that the city was out of funds for this service, but, thanks to a new city anti-graffiti ordinance, Richardson was liable for $2000 in fines unless she abated the wall herself.

Alkebulan-Ma’at next contacted CRP founder Desi Mundo, who had previously painted a Marcus Garvey mural in West Oakland as part of the MLK Cultural corridor series,  and shared his vision for the bookstore mural. Additional input was received from the Richardson family; and CRP agreed to donate its time and paint, in honor of the bookstore’s decades of community service. During Black History Month, CRP artists Desi, Pancho Peskador, Abakus, and guest artist Raven painted the mural as a tribute to black history, which the collective strongly feels should be celebrated all year round,  and the power of literacy.

“It was a blessing to be part of such a transcommunal project,” said CRP artist Raven, noting the mural was “initiated by an activist elder from Chicago who has lived in Oakland for two decades, supported by the owners of a prestigious community literary temple, and community artists volunteering time and resources to illustrate the requested vision.

“Such transcommunal works are always a a great challenge and learning experience, as we must strive to respect the indigenous community we are painting in, challenge gentrification and our unintended or unexpected role in it, and understand the impact of our presence as guests in a community,” he adds.

“We are more than pleased with the result, as are our customers and neighbors,” said Blanche Richardson. “It continues to be a pleasure and an honor to work with the talented, selfless and community-oriented CRP. We are grateful to be the recipient of CRP’s vision and artistry.”