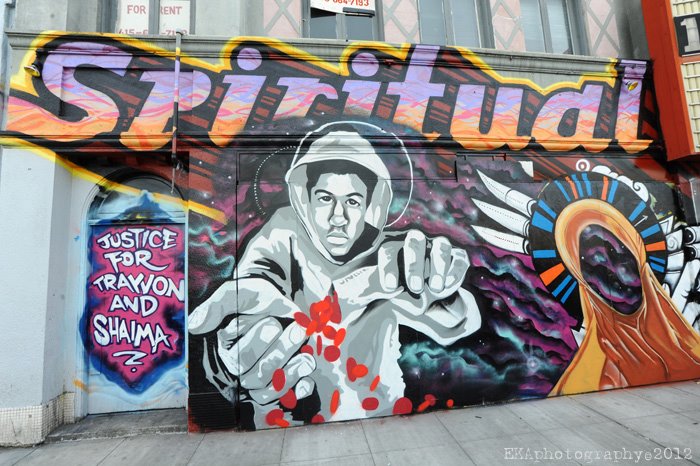 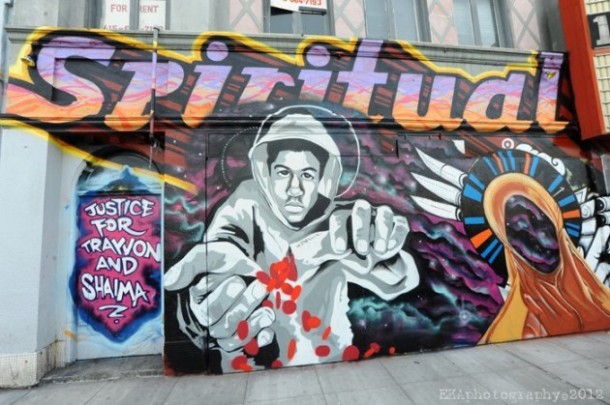 Community Rejuvenation Project artist Miss Ammo took the initiative to call for and create a mural that addressed these issues. She called in CRP Founder Desi W.O.M.E to collaborate on a piece that went up this past Sunday, April 1, at the former site of the Parkway Theater, in Oakland’s Funktown Arts District. The new mural–which has received hundreds of likes, shares and retweets in social media spheres in just over 24 hours–demands justice for the victims and an end to the fear-mongering prevalent in America that pushes both its citizens and law enforcement officers to attack and kill unarmed civilians for everyday acts of wearing hoodies or hijabs, or eating skittles. The attacks on Martin and Alawadi have been only the most widely reported of numerous recent incidents that connect to a long pattern of racially motivated killings that date back to the founding of the United States. The latest mural connects to previous CRP pieces at the same location through the message at the top of the wall: “Spiritual Release.” CRP believes that being in touch with one’s spirituality can present a solution to crimes of hate and ignorance.