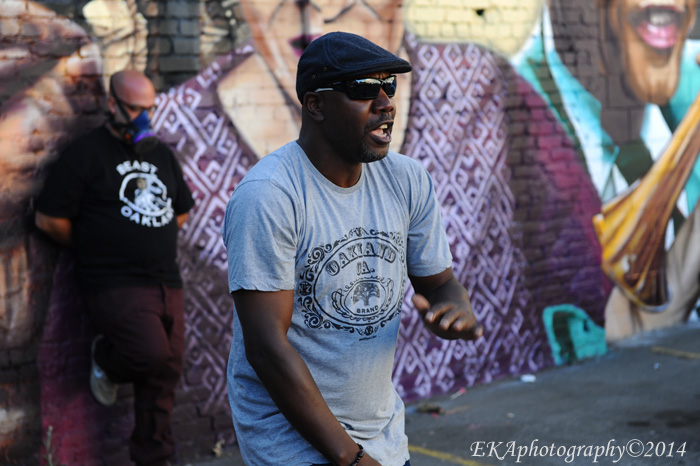 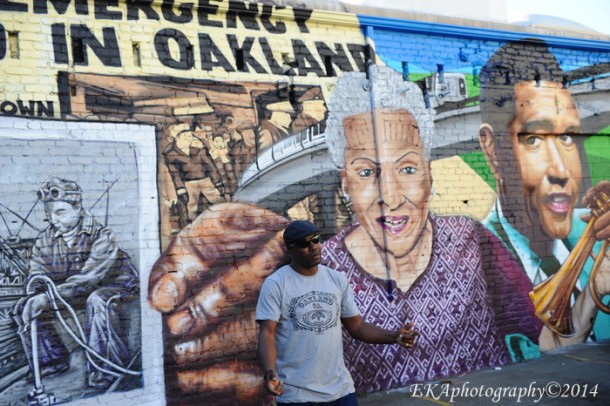 Jahi as PE2.0 at the Alice St. Mural. Photo by Eric K. Arnold

For the past four years, the Community Rejuvenation Project has been putting in work deep in the trenches of Oakland’s streets, painting murals with images and messages of upliftment, inspiration, struggle, and resistance. Recently, it’s come to our attention that several of our murals have been used as backdrops for videos by conscious rappers with a revolutionary mindset.

While CRP doesn’t consider itself a political organization per se—first and foremost, we are a cultural art collective; the scope of our work also reflects themes such as community healing, revitalization, physical and emotional health, neighborhood history and anti-violence, as well as concepts like recycling/composting, food justice, environmental accountability, cultural diversity, indigenous awareness, and alternate transportation— we do stand in solidarity with conscious hip-hop artists, the Black Panther and Oscar Grant movements, and historical figures including Mother Wright, Paul Robeson, Malcolm X and Marcus Garvey, to name a few CRP has painted over the years.

CRP is very excited to hear that Oakland-based educator and emcee Jahi has been chosen to lead the next generation of social and politically-aware hip-hop groups, PE 2.0, and even more stoked to find out that he planned to include our recent Alice St. mural in the video for his upcoming single, “What They Need” (dropping October 28). During the video shoot, CRP founder and ED Desi Mundo even made a cameo appearance! 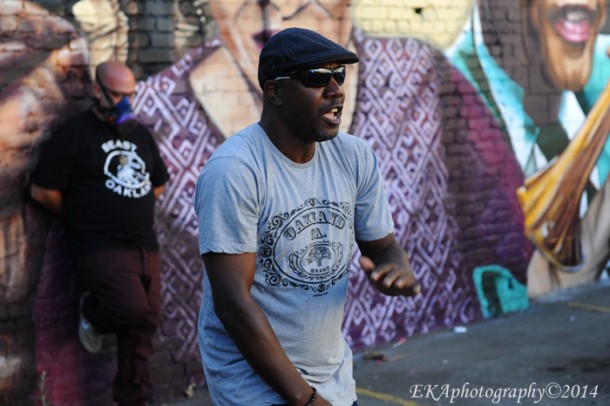 Jahi and Desi Mundo on the set of PE2.0’s “What They Need” video. Photo by Eric K. Arnold

“To have our work recognized and celebrated by conscious emcees is truly an honor,” said Mundo. “It upholds the connection between the hip-hop elements of emceeing and aerosol writing, which is part of the cultural tradition I grew up around in Chicago, before moving to Oakland 15 years ago. It’s also a measure of respect that our mural was chosen to represent Oakland for the relaunch of PE, a brand which holds tremendous significance for anyone who cares about rap lyrics with social and politically-conscious content.”

CRP asked Jahi why his chose this particular mural for a video expected to have national and international distribution, and here’s what he said: “We chose the location and mural by CRP, one, because they truly represent the best in cultural muralists in the Bay area, and second, [because] when they decide to do something, it’s not only art, but a history lesson in some way. Public Enemy is about using art as a motivational force and weapon for change. When I saw the mural I wanted to honor them, honor Oakland, and our collective heritage.” 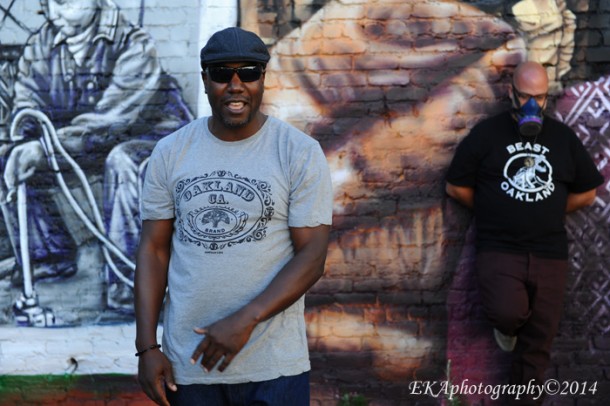 The Alice St. Mural was chosen as a backdrop for the PE2.0 video “What They Need.” Photo by Eric K. Arnold

As if that wasn’t enough, Califia Zulu member Ras Ceylon has also featured CRP murals in his videos: his latest video “Here & Now” features CRP’s portrait of Malcolm X painted on the Marcus Books store wall, as well as the Black Panther tribute in the “Underground Resistance” mural, both on MLK Way in Oakland. Furthermore, a previous video by Ceylon, “Heal Lanka,” was shot in front of CRP’s “Decolonize” mural on East 12th St., in East Oakland. In a statement, Ceylon explained his rationale for choosing these backdrops:

“As a representative of The Universal Zulu Nation from the Calafia Zulus chapter representing the 5th Element of Knowledge, I have always had respect for all elements of hip-hop and appreciate the tradition that has been built for the past 40 years of the Culture. Over the past year, I have been organizing and hosting (along with Zulu King M.C. K-Swift) the Zulu Nation Thursdays monthly event in West Oakland. Every artist that we have brought from out of town–from places such as Atlanta, Milwaukee and Florida–have all commented on how ill the graff art on the walls of Oakland are nowadays. Some of the work that stands out the most, in terms of cultural and political relevance are those of CRP. This is why you see these pieces and murals in my latest music video “Here & Now.””

The “Decolonize” mural resonated strongly with Ceylon for deeply personal reasons, he says. “In 2002, I released a song called “Decolonize” which gave an overview of Sri Lankan (the island where my parents immigrated from) and my own personal history. Since then I have been pushing the “Decolonize” mantra tough all over and have been credited for helping to popularize the term here. When Occupy Oakland began, I was one of the first artists asked to perform there and did a song called “Occupy Babylon: Decolonize pt.2” in which the hook says: “They occupying worldwide / we uprise and decolonize.” My position was in solidarity with my Ohlone comrades who rejected the term ‘Occupy’ in the context of Oakland and instead used ‘Decolonize’ to describe the revolutionary change we need to see out here.

“The ‘Decolonize’ mural that is opposite the 880 is one I have always wanted to utilize for a video and when new fratricidal incidents began occurring in my island of Sri Lanka in June 2014, I thought it would be perfect to release our statement condemning that reactionary violence in front of the powerful “Decolonize” mural. I appreciate the work of CRP and believe that the Youth of Oakland in particular are best impacted by seeing this powerful images as a reminder of the living legacy of resistance that they inherit growing up in these streets. Free’em All!”

For more information on Jahi and PE 2.0, click here.