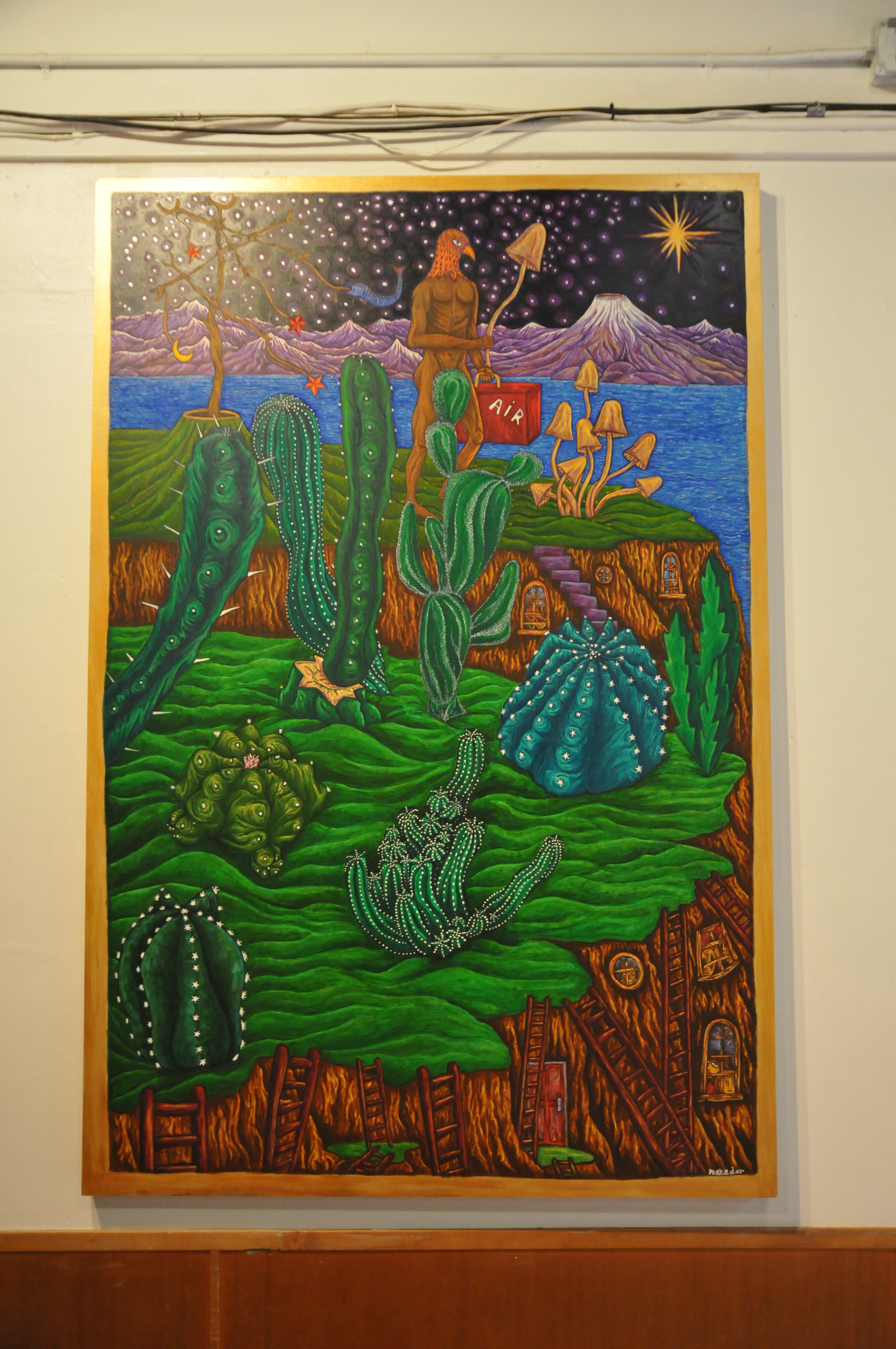 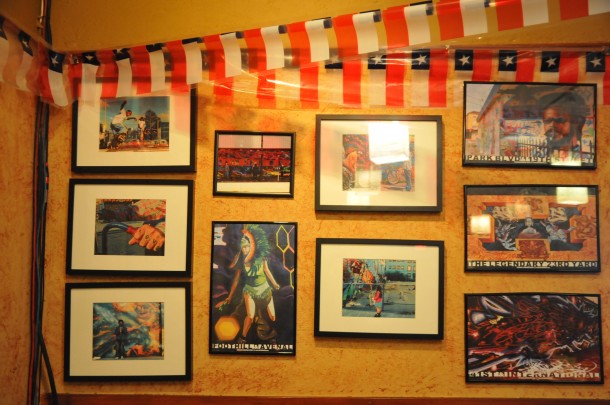 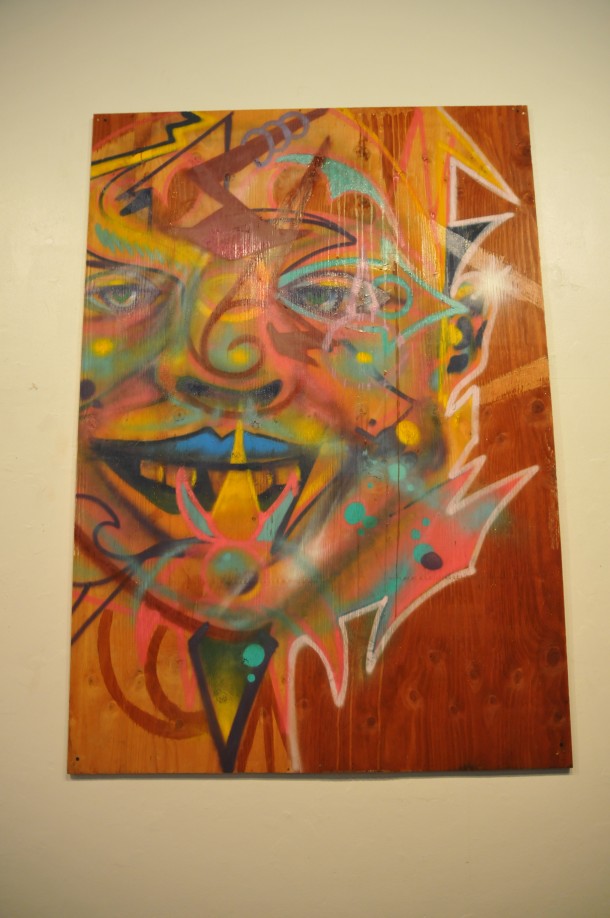 “This exhibit shows the diversity of styles within the collective, as well as the unique approaches and studies by the artists in a dialogue with our mural work,” said CRP founder Desi W.O.M.E. “Some of the works were experiments tried on canvas and brought to the walls, other works were brought from the walls to the canvas.” The show includes Desi’s “Arrowhead,” part of an ongoing study on masks and portraits, which departs from the artist’s usual photorealistic style, while mixing aerosol, wood, metallic flakes and wood stain. 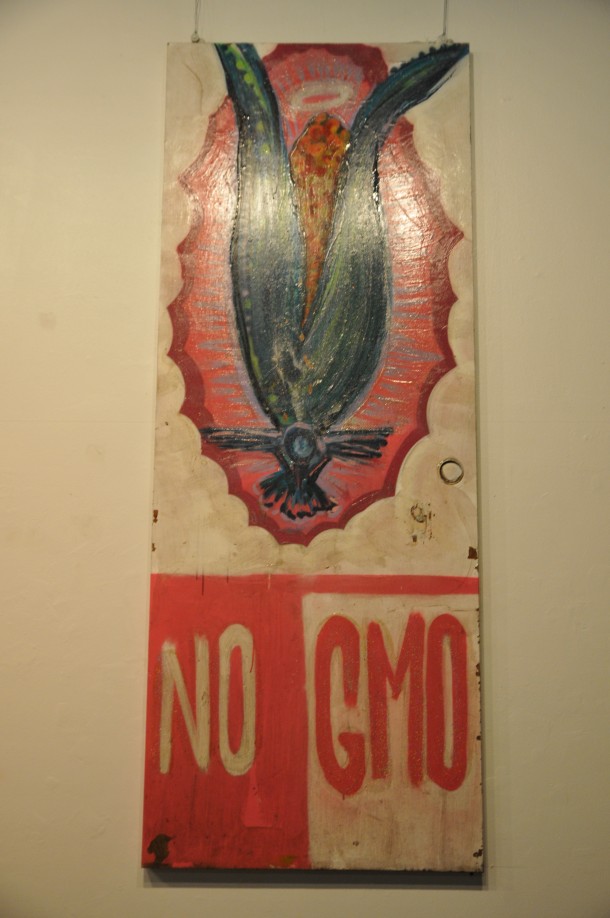 Mike 360’s “No GMO” is about the “sacredness of food,” the artist related. Not just a painting, it’s also a prayer, using the symbolism of the sacred plant maize, or corn, to raise awareness about the controversial topic of genetic modification. “I’m not with such things,” Mike said. “I’m a farmer and a dad.” The hope, he says, is that future generations will have clean food, land, water, and culture. 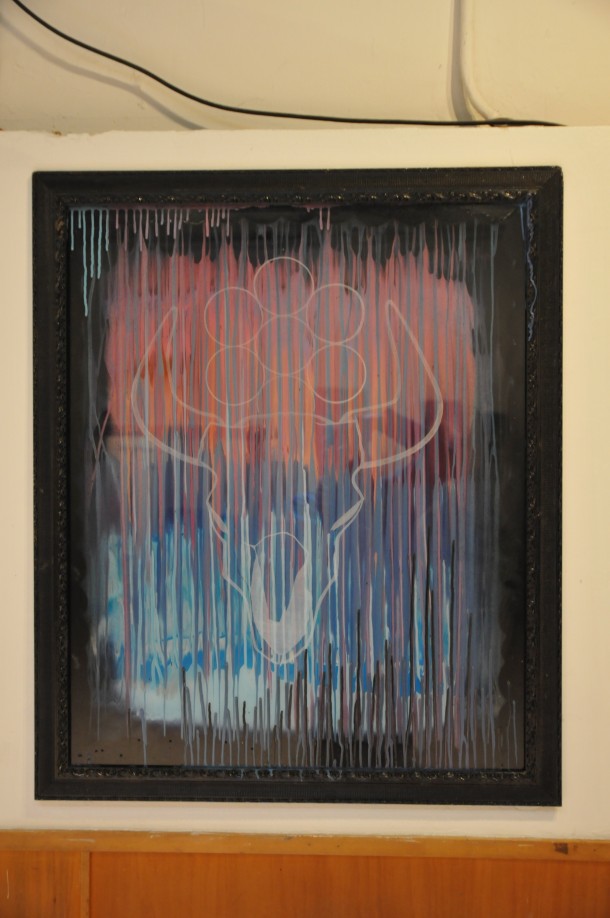 “Art Facts” also highlights several works by Release, including “Release Leonard Peltier,” a handmade screenprint which sends a powerful plea to raise the awareness of the wrongful imprisonment of U.S. political prisoners;  “Whole Buffalo/ Holy Bison,” a glass etching/spray paint mixed-media piece inspired by indigenous tribes of North America; and “The Overnight Creation of a Galaxy,” a mixed-media piece on masonite and wood inspired by the metaphysics of time and space and the union between man and woman. 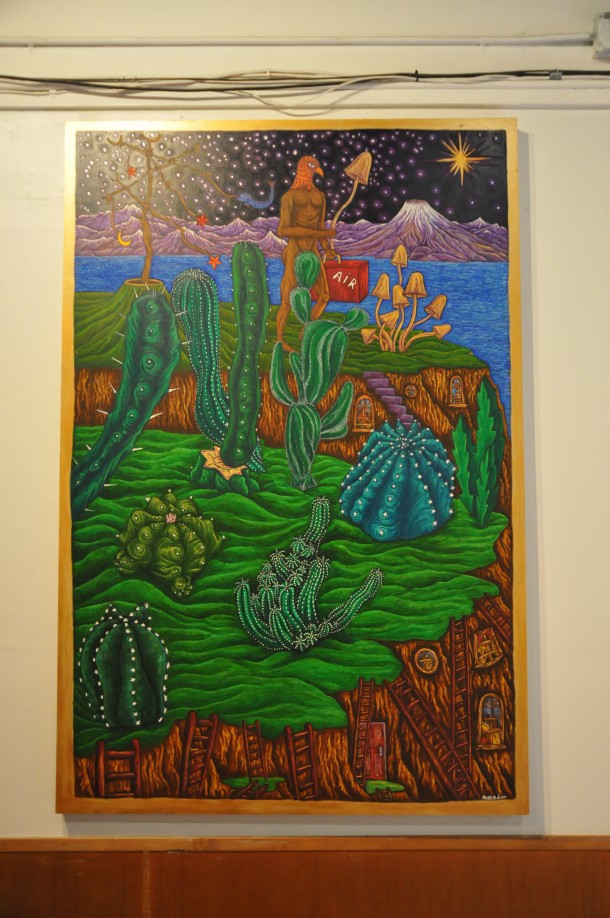 Chilean expatriate Peskador shows several large works, including an untitled painting best described by the artist himself: “The main character in that piece is a naked human with a bird’s head, holding a suitcase, tagged with the word “air,” in one hand, and a magical mushroom (Psilocybe) in the other hand.  The mushroom depicts the spiritual journey that I have been taking and discovering in the last decade.  In a way, this is a self portrait surrounded by the immediate elements from my garden to the spiritual medicines used since the very beginning of human existence.” Six other Peskador works in the show, part of a 10-painting series, depict an ironic dichotomy between idyllic nature scenes and post-apocalyptic landscapes, representing “the struggle of humanity to survive in these crucial times.”
As LaPena Executive Director Paul Chin said, “The group artwork on display at La Peña by the Community Rejuvenation Project is an excellent example of art and activism coming together. The diverse pieces reflect La Peña’s core values of bringing community together and working to make a positive difference for our communities in struggle and for a better world for all.” Added Nicolas Cabrera, La Pena’s Development Assistant, “CRP is a valuable organization for our community. Their effort to bring positive images to the community is commendable. La Peña is honored to present the art of this dedicated group of artists.” Cabrera conducted this interview with Desi W.O.M.E and Pancho Pescador at La Peña during the hanging of the show.
A closing reception for “Art Facts” will be held October 28 at 7 p.m.
“Art Facts”: Mixed Media Works by the artists of the Community Rejuvenation Project
Featured artists: Desi W.O.M.E., Mike 360, Pancho Peskador, Release, Dora Chavarria, Skul, and Irot
Closing Reception:
7 p.m., October 28, 2012
3105 Shattuck Avenue, Berkeley CA 94705
For more information, visit www.CRPBayArea.org or www.LaPena.org or call 510-849-2568.
1
art oaklandCommunity ArtCommunity Art ProgramCommunity MuralCommunity Mural ProjectCommunity Mural ProjectsCommunity MuralsDevelopment of YouthGraffiti AbatementGraffiti RemovalGraffiti SolutionsMuralMural artMural ProgramMural ProjectsMuralistMuralsOakland Mural ProgramProject MuralYouth and Developmentyouth development projectYouth in Development
« Urban Art-Fitters to beautify downtown alleys
Egyptian authorities remove Mohamed Mahmoud’s revolutionary aerosol writing »