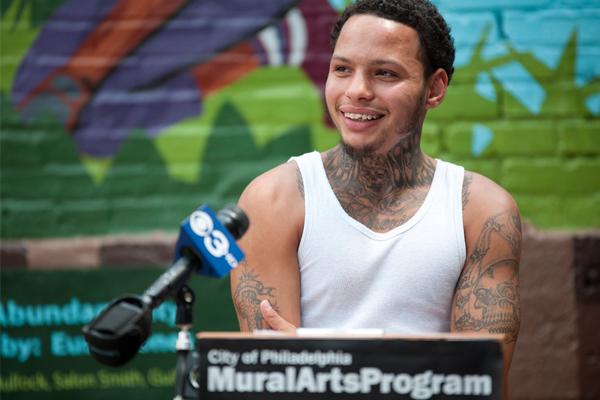 CRP has long been interested in how mural projects can be alternatives to the criminal (in)justice system. CRP has a long-term vision of providing vocational training and employment for  youth reentering society from Juvenile Hall. CRP is preparing to do a series of murals highlighting restorative justice issues as well as actively serving as a holistic solution. This article tells the story of one of the most established restorative justice mural programs, found in Philadelphia. 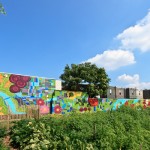 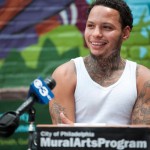 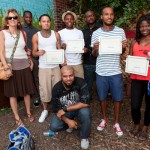 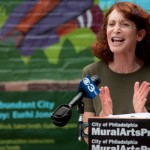 There are 3,773 murals in Philadelphia. But for Sam Laboy, a 22-year-old from Kensington, there may as well be one.

Since early spring, rain or shine, Laboy worked on an expansive mural and community farm project in Brewerytown, the product of a partnership between the City of Philadelphia’s Mural Arts Program and Marathon Grill.

Formerly vacant, the 15,00-square-foot plot was tamed and beautified by Laboy and other young adults involved in the criminal justice system.

“This was my everyday site, I did the majority of the mural,” he said proudly. Laboy participated in a hands-on apprenticeship program called the Guild — an innovative collaboration between the Youth Violence Reduction Partnership, the Philadelphia Prison System and Mural Arts’Restorative Justice Program.

“I made a young and dumb mistake. I got snatched into the streets or whatever,” explained Laboy, whose probation officer recommended the program. Under expert supervision, Guild members practice mural preparation and repair, gaining carpentry and landscaping skills along with general job readiness — all intended to support a smooth re-entry into the community.

In Brewerytown, members put up scaffolding and painted. They constructed an outdoor kitchen and a vegetable washstand, earning firsthand knowledge about the important role of urban farming. At graduation, everyone was awarded tool kits.

“This was a pretty good group, coming from a negative background,” Laboy said, referring to his upbringing and recent legal troubles. Hopeful that the experience will help him find employment, he added: “If I can get a job somewhere nice, that’s what’s up.”

As an alternative look at the criminal justice system, Restorative Justice engages inmates, former inmates and juveniles, offering mural making and community service as a platform for healing and transformation.

“Restorative Justice is one of the best-kept secrets of Mural Arts,” said Program Director Robyn Buseman. “People don’t normally associate the population we serve as part of the art world, but we provide opportunities for everyone in the community.”

The program is active throughout the Philadelphia prison system, at the Youth Study Center, a detention facility, and St. Gabriel’s Hall, which provides long-term placement for delinquent boys. Every year, it reaches hundreds of inmates and juveniles and produces a handful of murals.

“Because it’s an alternative, it’s really come to the forefront due to the number of incarcerated people in this county,” said Buseman.

While art is a proven, powerful re-entry tool for people coming out of prison, funding is a formidable obstacle. The Restorative Justice Program relies on a mix of public and private dollars that are often sporadic and difficult to secure.

“I don’t know of any other program using art and community engagement along with restorative practices,” she added. “Funding is one of the main struggling blocks. People can’t find it.”

The Abundant City
The mural at Marathon Farm is a colorful grid of the city, providing a backdrop for verdant rows of vegetables, sunflowers and herbs.

The Farm’s attributes include a 20-plot community garden and designated space for educational workshops and cooking demos. Roughly half of the organically grown produce will supply Marathon Grill’s Center City restaurants. The rest will be sold on weekends at an affordable farm stand and at nearby farmers’ markets.

But less than two years ago, the lot was an eyesore, blighted and overgrown.

“When we took possession of the land, we saw this bare brick wall and we said, ‘that would be an amazing place for a mural,’ so I called Jane,” explained Cary Borish, who spearheaded the project for Marathon.

Jane Golden, the longtime Executive Director at Mural Arts, has a change-making reputation, and her team quickly mobilized. The project was ideal for the Guild program and located in an area familiar to many participants.

“Jane thought of the Guild program because it involved more than just a mural. It involved the carpentry and the garden, so it was a perfect fit,” said Buseman.

Several months later, on the day of the mural dedication, the bounty of that fit — made possible by a series of groundbreaking partnerships — was palpable.

The real-life tale of vegetables, court-supervised adults, art and mural making ended in reclaimed land and a plentiful source of food and healing. For long-challenged Brewerytown, it was much more than a small victory.

“It’s not enough to create art, as great as that is,” emphasized Golden, surrounded by a happy mix of supporters, participants and community onlookers. “Our job is to mine the social power of art and figure out how to move the needle. When you start doing things in communities, profound things can happen.”