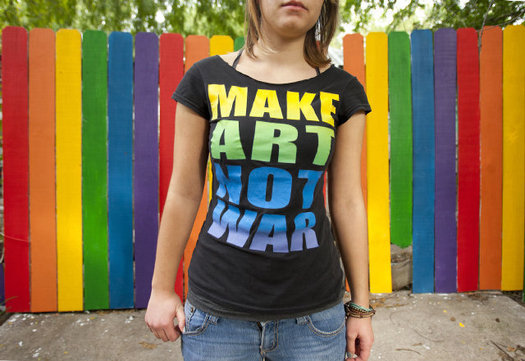 For the most part, the approach used here by Kansas City reflects the values pushed by the Community Rejuvenation Project. CRP believes in community engagement, social relevance and positive messaging in the works, and reflecting the neighborhood residents in its work. We also like to concentrate in a specific area and transform multiple locations to maximize the impact of our work, in the same way that this program did. We believe that the city, state and county governments need to empower community arts organizations to create high quality works with local residents.

A garage door facing an urban alleyway is a canvas just asking to be tagged with graffiti.

But paint some bright sunflowers or clouds on it, and even the gangs seem to be impressed.

“Maybe they just see that it is something that someone spent some time on and put some hard work into, so they don’t want to ruin it,” said Marie Abed, a sophomore at Sumner Academy in Kansas City, Kan.

She and other teens are transforming a once graffiti-marred alley into an art gallery of sorts in a partnership with the city and Community Housing of Wyandotte County. They’ve already painted 10 murals on two blocks of the alley between 16th and 17th streets and north of Grandview Boulevard.

A $2,500 “Graffiti Hurts” grant recently awarded by Keep America Beautiful Inc. will allow the project to extend another block south and to pay students a modest amount for their artistic expressions.

It will even pay to install solar-powered lights, triggered with a motion detector, to illuminate the art works and to deter those who might deface them.

It is part of a relentless battle against graffiti in many parts of the Kansas City area.

Left unchecked, graffiti can dampen a neighborhood’s spirit and “send a message of apathy or intimidation,” according to a task force established this summer in Kansas City, Mo., to address “gateway” activities that can lead to more serious crimes.

City officials note a difference between artistic graffiti, which often is created on the side of a building with the property owners’ consent, and illegal kinds. Tagger graffiti is the work of vandals, usually seeking recognition from their peers. Gang-related graffiti is usually about marking one’s turf or making threats. The National Council to Prevent Delinquency estimates about 80 percent of graffiti is created by taggers and about 10 percent by gangs.

A U.S. Department of Justice report notes that graffiti can cost communities by reducing retail sales, if people don’t feel safe in a neighborhood, and by declines in property values.

Kansas City’s Parks and Recreation Department has long waged a war against the graffiti problem, which is most prevalent in the old Northeast area. Crews use products called Taginator and Tagaway to dissolve graffiti paint.

The ideal is to remove it within 24 hours, if possible, because that has been shown to deter taggers.

However, “in some parts of the city, you clean it off one day and you’re cleaning it off again the next day,” acknowledged Forest Decker, superintendent of parks in Kansas City.

The Kansas City, Kan., murals are in that city’s Cathedral Neighborhood. The area is not blighted, but if taggers are allowed to get a foothold there, it could slip.

Community Housing of Wyandotte County, working with the Unified Government’s Operation Brightside, began attacking the problem with some money from the Local Initiatives Support Corporation.

“When we first started, we had some paint left over from a mural we did at 11th and Riverview and it was just a can of this and a can of that,” said Stephen Curtis, community organizer for Community Housing.

Now they use a wide palette of 20-year, outdoor latex paint.

Owners of properties facing the alley have noticed.

“People will walk through and tell us that they think we’re doing a really nice job,” said Amber Finley, a junior at Sumner who is part of the mural program and who wants someday to be an art teacher. “The difference that I’ve noticed is that people are encouraged to keep their part of the alley cleaner.”

Curtis said the project has also had the benefit of older people interacting more with the kids.

The students are particularly proud of a field of sunflowers that adorns the side of a garage.

“The couple who live here, they love this one,” Abed said. “They said their garage or shed had never looked better.”

Other murals include an undersea setting, am impressionistic sunset on the waves and an abstract design. The property owners sometimes make requests, such as a man who wanted the boards of fence painted in rainbow colors.

Sumner senior Jordan Fachin joined the project this past summer.

“Honestly, I didn’t think it would be anything this nice,” he said. “Then we came down the alley and I saw all the different kinds of art they did and I kind of wanted to add to that.”

The students report that while one of their murals was slightly marred by a vandal, none so far has been re-tagged.

Kansas City also encourages community groups to paint murals as a deterrent to graffiti. An example is a parade of flags of different nationalities that adorns a retaining wall on Van Brunt Boulevard south of Ninth Street.

Five years ago the parks department was spending about $200,000 a year to remove graffiti but that has dropped to about $130,000, Decker said. Most of that is due to personnel reductions.

A sales tax passed by voters this year, which established a dedicated revenue stream for the parks department, should help restore graffiti abatement.

“We’re looking at upgrading our graffiti program to get back to those levels from previous years,” Decker said. “Now, we have a 48-hour response time. We’d like to get back to 24 hours.”