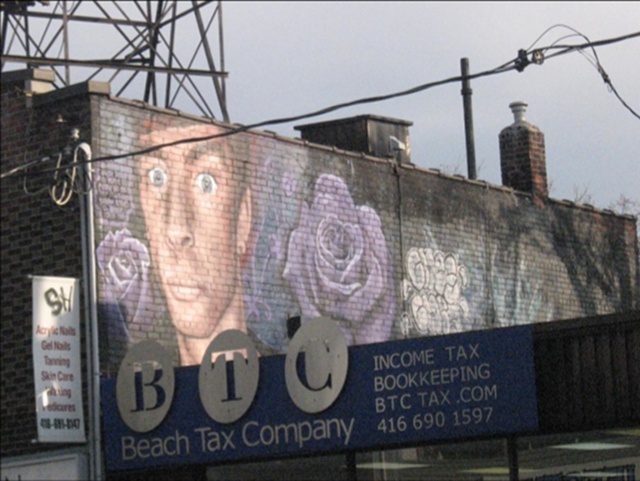 Reading the comments made by the panel below illustrates how hideous this process really is. The decision of whether or not keep a piece is purely a matter of discretion, with no standards in place. There is no requirement that the committee be at all versed in the aerosol culture nor do they consider the property owner’s request that the pieces remain. There is no consideration to the historical relevance of the artist or the piece. Instead you have comments like “I guess I’m just all for expressions of art that make people happy.” That would be  cute, except there are real artists’ works at stake. And the property owners have expressly stated that they want these pieces to remain. How can the city argue with that? Why do they still need a committee to determine the “validity” of the artwork? Do they have the same committees for kindergarden fingerpainting murals that are arguably some of the sloppiest and ugliest works created? No. There’s only one target for this committee. Spray paint. And its not the quality that matters. The committee has yet to rule that a piece has to be destroyed. It will be interesting and telling to hear the logic that they use.

The City’s new graffiti panel held its first meeting last Friday morning. There, the fates of nine murals on the exteriors of Toronto buildings were decided.

The owners of the buildings had submitted applications to the City requesting that the murals be declared “graffiti art,” or “art murals.” Either designation exempts a painting from enforcement under the City’s graffiti bylaw, which mandates that vandalism be removed at the property owner’s expense.

It used to be that city councillors decided whether to grant “art” exemptions to murals, but thanks to some reforms that came about as a result of Mayor Rob Ford’s graffiti blitz, the task now falls to the graffiti panel, which is made up of City staff. Of the nine pieces up for discussion at the panel’s inaugural meeting on Friday, three were spared from the power washer while decisions on the other six were bumped to the panel’s next meeting on November 30.

Recent pictures of the graffiti in question were displayed on projector screens for the committee to consider while its members expressed their thoughts and concerns. The first three pieces had their exemptions approved with little argument, but committee chair Glen Sharp took issue with a mural at 155 Augusta Street, which features a cartoonish drawing of chubby guy in a baseball cap. For Sharp, the image’s obscure facial expression and pointing finger didn’t bode well. But Jane Purdue and Carolyn Humphreys disagreed. In the end, the panel members decided it was better to deal with the question at their next meeting.

The most contentious item on the agenda was the mural near the roofline on Jerry Stone’s property at 1255 Queen Street West. Stone’s application for an art-mural exemption only covered graffiti on the east wall of the building, but photos revealed that numerous tags reside on the south wall as well. Stone wanted to revise his application to include both walls. But this turned out to be not so easily done, even after the committee tried to work it out with their legal counsel.

Stone had problems with sloppy graffiti tagging before, the kind that would be considered vandalism, but found removing it to be effective. He had tags buffed off of the north wall of his building, which faces Queen, and he hasn’t seen any new ones pop up there since. Murals on the east and south walls, however, he wants to keep.

When the meeting reconvened, even Stone’s lawyer, Owen Winterson, couldn’t persuade the panel to make a call. They decided they needed more information on exactly what the tags on the south wall meant before they could go ahead with lumping the two walls together. Stone will have to wait to see if he can keep the decorative murals where they are.

But it wasn’t all hushed deliberations and quiet huddling with lawyers and officials. James Lafazanos sat before the panel and defended a mural at 899 College Street, which is one of those that had its exemption granted. “If you get a skilled and respected graffiti artist to do a piece or a mural, you don’t have people tagging the walls over top of it. And since August, when it was put up, there hasn’t been a tag since. It’s not uncommon for people to take pictures of this wall,” he said.

The popular mural depicts the anime character Totoro: a big, fuzzy, smiling creature who loves kids and adults. “I guess I’m just all for expressions of art that make people happy,” Lafazanos said.