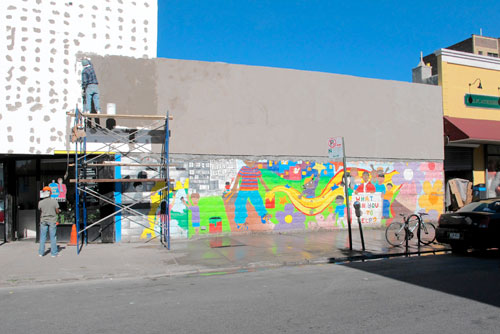 The story below is all too common. A new business moves into a property with a mural and covers it. In this case, the C-Town Supermarket destroyed a mural created by an after-school program. Most visual artists are not aware that murals are legally protected under the Visual Artists Rights Act (VARA). In this scenario, the supermarket has offered the space back to a community group, not necessarily the original artists, and has not publicly committed any funds towards the repainting.  So basically, it is on the community to fundraise for the project if a new piece will be created. And, as in most grassroots fundraisers, the artists are often end shorting their own salaries in order to make the project happen. There is nothing more honorable than doing your work for the love, but, in this case, the supermarket needs to ante up and make sure that the artist and his supplies are fully covered.

Ditmas Park residents outraged by the loss of a four-year-old community mural that was plastered over when the supermarket it was painted on underwent a facelift has been given the go-ahead to put a new mural on the building — as long as they can raise the money first.

Workers at the C-Town Supermarket on E. 16th Street near Newkirk Avenue cemented over the beloved mural without checking with the community or the creators of the artwork when they upgraded the store’s facade this summer, but said this week they wanted to give a community group the opportunity to paint another mural on their new blank wall.

“We’re probably going to put it right where the old one was,” said Juan Diaz, a store manager.

The Flatbush Development Corporation, which had helped organize the original mural project, said it was happy to put up a new mural, but said the group’s larger concerns revolved around raising the appropriate funds.

A new mural could cost up to $7,000 to design and paint, but Flatbush Development Corporation members said the cost will be worth it.

“The other mural stood the test of time, and I’m going to miss it dearly, but something and fresh and new might be inviting here,” said Flatbush Development Corporation director Robin Redmond.

Redmond hopes C-Town will match any funds the organization raises for the project, but Diaz would not say what his store planned to do.

Community members who worked on the original mural say they are still smarting over C-Town’s decision to cover up the diverse tableau depicting kids of all races painting together.

“It’s a bit disheartening to hear it’s gone,” said Kevin Augustine, one of the two teachers who facilitated the two-month after school program that created the mural in 2008. “It was a hot summer when we were working on that thing. A lot of work went into it. I can’t say I’m not a little heartbroken.”

Workers at the remodeled C-Town, which is stocking store shelves with more expensive and organic products to appeal to the new residents who have been priced out of nearby Brownstone Brooklyn said the mural’s death by cement was necessary for the building’s facelift.

Yet others say the community paid a steep price for the store’s beautification — something they claim is all too typical when it comes to development projects in Brooklyn.

“There’s some shortsightedness as this ‘progress’ is happening,” said Augustine. “I’m not quite sure who was in charge of this, whether it’s the big wallet guys or not, but they don’t know what they’re losing.”

Reach reporter Eli Rosenberg at erosenberg@cnglocal.com or by calling (718) 260-2531. And follow him at twitter.com/emrosenberg.