HomeRethinking the Role of the Aerosol Writing in the Community 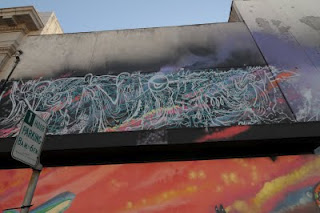 Gompers High School students celebrated a victory last week when the Richmond City Council awarded them $1,000 to restore a mural that was painted out by the city’s graffiti abatement team. However, underneath the celebration, a threat to community’s artists’ ability to create public works is looming, one which maybe drowned out in the congratulatory cheers, now that the immediate wrong has been righted. 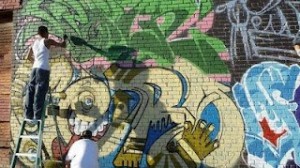 Reactionary politics are always dangerous. The policies that are created in those moments often have long-lasting unforeseen consequences that are equally difficult to undo until another catastrophe forces another emotional reaction and the cycle is repeated. Richmond muralists have recently come under such a threat that threatens to handcuff their ability to create public artwork. A change in policy is needed, but one that promotes the creation of artwork rather than bureaucratizes it. In this article, the Community Rejuvenation Project presents three simple policy changes that can protect murals from destruction rather than frontloading their process with a series of political obstacles.
The controversy began when the Richmond Graffiti Abatement team painted over an aerosol mural created by local youth in the community. Students at Gompers High School had been given the responsibility of caretaking a portion of the Richmond Greenway, a former railway that has been transformed by the community into a bike route, gardens, and a site for artwork. The students, with the support of their teacher, Gretchen Borg, received permission from a property owner near Eighth Street to create a mural. With approximately $1,000 of their own money, the youth purchased spray paint and spent two weeks creating the mural that was aerosol writing of their chosen names. Mrs. Borg went to the city repeatedly to make sure that everything was done properly, including attempting to get a permit, which she was told was not required. Nonetheless, the graffiti abatement team painted over the mural after associating some of the signatures with illegal graffiti that has occurred in other areas of the city.

Richmond’s abatement policy states that anything deemed “graffiti” must be removed, regardless of whether or not the work is approved or even commissioned by the owner. Several other legally commissioned murals have been destroyed by the city due to such labeling but this is the most high profile incident and the most challenging because of all the documented steps that Mrs Borg took to ensure that mural would be safe.
Richmond’s graffiti mandate amounts to a sanctioned prejudice against a specific aesthetic. Any works created with spray paint appear to be subject to removal. This would potentially include the Community Rejuvenation Project’s Robots and Butterflies mural that was commissioned by the RACC. 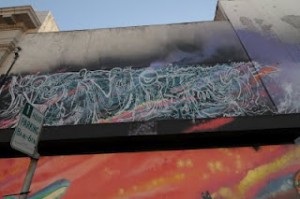 “Peace” and “Dignity” by Mike 360 and Desi W.O.M.E, detail from the Robots and Butterflies mural commissioned by the Richmond Arts and Culture Commission

Richmond’s response has been equally problematic. After apologizing to the students, the city police chief gave a 10 minute powerpoint presentation outlining how graffiti was a huge problem and the city’s response to the Gomper’s mural, however unfortunate, was in line with its abatement and policing policies. The city would continue to remove murals labeled as graffiti regardless of owner approval or not. The city council saw this incident as potentially embarrassing but indicated that the solution lay in creating a public mural approval process that would make murals legitimate. Councilmember Tom Butt repeatedly asked the youth if they would be satisfied if they were given a voice in the approval process, to which the youth seemed agreeable. Richmond Arts and Culture Commission (RACC) manager Michelle Seville was given the task of drawing up a mural approval process in 60 days.

There are several problems with this approach:
A mural approval process fails to address the real problem with what happened with the Gompers mural. The error was not in the youth’s artwork or their approach to the property owner or the city. The failure was directly at the hands of the abatement team and the police who destroyed the mural. However, in creating a mural approval process, the city is instituting additional bureaucracy for the artists rather than developing methods to protect murals once they are created. Each new work is subject to review that slows the process, requires the artist to potentially have to redraw their sketches multiple times, and tone down any challenging themes. The end result will be a slower and more painful process that will reduce the interest of artists to participate. For the youth already involved in the illegal aspects of writing, that bureaucracy will close the door to their interest in creating sanctioned works.

On the other hand, this moment is an opportunity to enact some simple yet powerful adjustments to the abatement mandate that will precipitate the creation of more new works and help to transform the image of Richmond from violent and bleak to creative and growing. 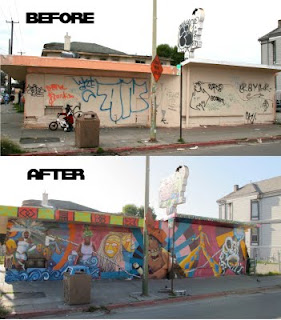 Unsanctioned murals can still remove blight. Which would you prefer? Carijama mural from the Martin Luther King Cultural Corridor.
First, the Community Rejuvenation Project recommends the creation of a mural registry to protect existing murals. Rather than focus on a mural approval process, develop a method to protect existing works once they’ve been created. This registry can be used by the abatement agency to avoid the destruction of legally created works. Further, the community should be capable of registering street art and unsanctioned works that it wants to keep in the community. Removing a mural in the registry would require a petition by a significant number of local residents as well as dialogue with the artist.

Second, we recommend that citizens and non-profits be given the ability to petition to adopt a wall from absentee commercial property owners. Both Richmond and Oakland’s policy has been to notify property owners of the presence of blight and give them a deadline to remove it. If the owners fail to meet that deadline, the city will abate the blight and bill it to the property owner in their annual property taxes. Citizens and non-profits should be given the ability to make similar notifications to the property owner. If the owner fails to respond to a community petition in a comparable amount of time, the petitioning group should be able to adopt the wall at their own expense and create artwork that can be entered into the city registry.

Third, the city should have similar program that adopts high-blight walls and employs artists and youth to paint murals on them. A similar notification process to the commercial property owner would be followed. This will allow for increased youth civic engagement, the creation of lots of high-quality artwork throughout the city, and less on-going blight problems. The focus for these mural initiatives should be the high-target, highly visible, and large-scale locations. Theoretically, an effective abatement strategy should lead to less abatement each year. If the city’s costs for abatement are not decreasing incrementally, then the city councils should redirect some of the abatement budget to long-term solutions such as murals.

Richmond current trajectory is poised to effectively prevent the creation of all but the largest and least controversial murals. Those projects will require experienced, professional artists who have learned to navigate the city bureaucracy, have the finances to wait months to get started while to wading through the commission meetings, paperwork and approval process. This policy will not give the youth a means to express themselves except in the approval process for other artists.

On the other hand, Richmond has the opportunity to take a bold step to protect the artwork in its city, lift the sanction on youth-based aesthetics, and open the doors to new works by arts of all backgrounds, styles, and experience. Let’s hope that Richmond makes the right choice. 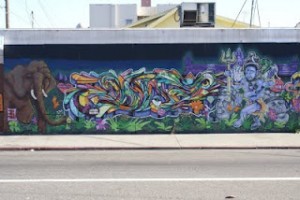 Desi W.O.M.E is the founder and director of the Community Rejuvenation Project. Painting since 1990, Desi helped organize and contributed to 33 murals last year, as documented in Rejuvenation: 2010 Mural Anthology, available at www.crpbayarea.org. He is a founding artist at United Roots, Oakland’s Green Youth Arts & Media Center and facilitates aerosol writing studies at Oakland Unity High School. Desi is recently completed a Peace & Dignity mural with P.H.A.S.E.2, Vulcan, Mike 360, Elijah Pfotenhauer, Beats 737, Pancho Pescador, and numerous youth on 41st and International in East Oakland. He is thankful for the opportunity to share this with you and thankful for the company he keeps.