The Saga of Cleveland’s Controversial “137” Mural

Public art exists in a space between censorship, gentrification, community engagement, and notions of aesthetic value. These are the takeaways from a recent mural painted in Cleveland by CRP Executive Director and founder Desi Mundo, which became a source of controversy as well as a catalyst for a lengthy community discussion around these topics. 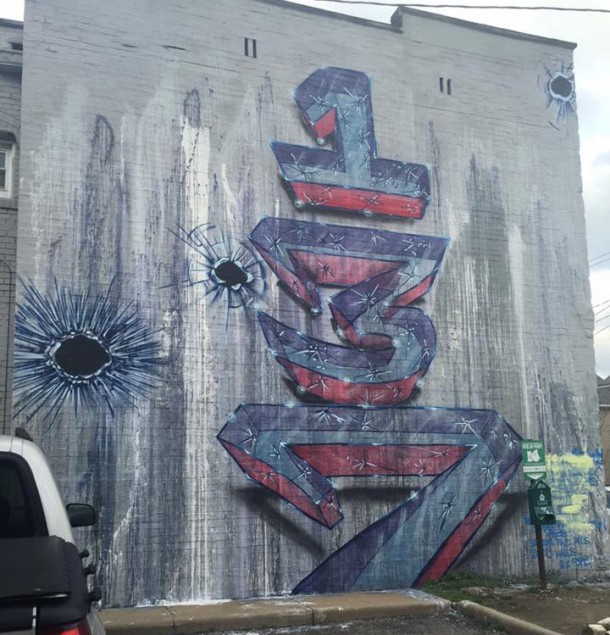 The “No Convictions” mural in Collinwood

It all started when Mundo traveled to Cleveland to give a talk for Community Partnership for Arts and Culture (CPAC), a non-profit arts advocacy group. The organizers specifically wanted Mundo because of CRP’s track record of creating new models for community engagement around public art, and for the work the organization has done around furthering the aerosol aesthetic beyond stereotypical notions of graffiti vandalism, and into the public policy sphere. Mundo gave his presentation, which by all accounts went well. Afterwards, like any visiting visual aerosol artist might do, he asked for a wall to paint.

Amy Callahan, of the Waterloo Arts District, then stepped in and directed Mundo to a suitable location. According to Callahan, the property owner had requested a mural be painted some time ago, but didn’t ask for any specific input into the design process.

Meanwhile, Mundo asked some members of the local community what he should paint. Originally, he wanted to do a tribute to Tamir Rice, the 12 year-old shot and killed by Cleveland police in 2014, but was informed by locals of another incident even more egregious than the Rice incident.

In 2012, a high-speed chase led to police unloading 137 shots into a car containing Timothy Russell and Malissa Williams.  As the Guardian reported (via the Associated Press), “Cleveland patrol officer Michael Brelo stood on the hood of the suspect’s car and fired at least 15 shots through the windshield – five fatal – at the two unarmed people inside.” 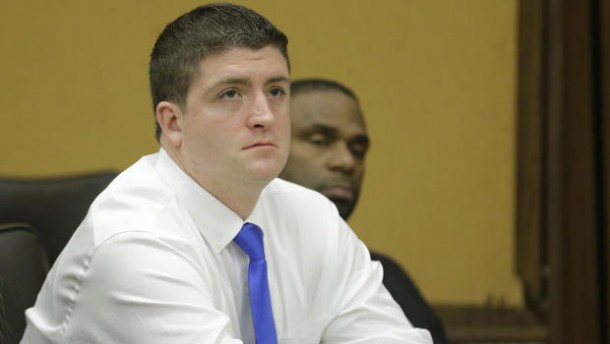 This barrage came after 100 rounds had already been expelled. The incident sparked protests and les to six officers, including Brelo, being fired. However, Brelo—the only officer charged—was acquitted of manslaughter this past January. The incident also led to a review by the US Department of Justice which led to the Cleveland Police department being placed under a federal consent decree for a pattern of civil rights violations and excessive force.

Mundo and a few other local artists painted the numbers “137” along with the title, “No Convictions” on the wall. Callahan had no issues with the mural’s content. Cleveland police, she said, “needed to have some reform… The answer is more reconciliation, [be] more creative, less divisive.”

As the mural took shape, however, both Mundo and Callahan noted the property manager expressed concerns the obviously-political statement might mess up his relationship with the police. (An added wrinkle: the mural location was just a few blocks from the Boardwalk, a favorite hangout for cops.)

Once the mural was completed, admittedly with a shorter process than the typical CRP work, the intrigue began. An unknown person or persons buffed out the names of the Clevelanders who assisted Mundo with the mural – making it seem as if there was less community participation than was actually the case.

A social media thread among members of the Waterloo Arts community, including some gallery owners, began as very critical of the art – “this mural is not something that needs to be highlighted in our neighborhood,” one comment stated; another argued the mural was “graffiti with very little artistic merit” – and eventually evolved into a more nuanced conversation which addressed the relative lack of discussion around POC issues in the Collinwood neighborhood, the role of street art in provoking meaningful discussion, and the question of whether censorship is appropriate to those discussions. Still, the fact that most of the dialogue was between white males opining on issues of importance to African American inner city residents is problematic on many levels.

While this was going on, another dialogue was happening via email, as Callahan was being taken to task for an alleged lack of accountability and due process by City Councilman Michael Polensek, who expressed his disapproval with the mural rather bluntly. In an email to Callahan provided to CRP, Polensek rails against the mural, which he calls “a piece of crap” and “offensive graffiti.” He goes on to say that a mural with an ostensible anti-police message is inappropriate “in an area [where] we are supposed to be attracting new opportunities and investment” and equates the art work to “vandalism.” Polensek concludes his email with a threat to pull funding from Callahan’s organization, Waterloo Arts.

Despite the harsh language, Callahan remained adamant about the mural’s validity. “The Councilman was a bully,” she said in an interview. “There’s no way I would have done things differently,” she added, noting that her organization has facilitated 20 similar murals, some with political content, in the district in the past few years, none of which have been subjected to a design review process. “I was wanting to give artists walls” to paint on, not subject artists to a tiresome bureaucratic process, she explained.

Callahan went on to note the “strong reaction was a little interesting when it was a different type of people who were upset.” Unlike some of the other politically-oriented murals, “this one looked more like graffiti, it looked more like illegal art.” That signified, she said, “a lack of control” to some observers.

The mural debate was also the subject of a blog post by the Collective Arts Network (CAN), a Cleveland-based arts advocacy organization.  As CAN wrote, “Detractors of the mural, titled “No Convictions,” are critical mostly of what it says to potential visitors to the neighborhood, and are concerned about what it might say to police. The neighborhood’s continued rise depends on visitors to keep coming with money to spend, investors to keep filling vacant houses and storefronts, and police to keep the whole enterprise safe. They add that the incident reflected by the mural didn’t happen in Collinwood. Some of them just think it’s ugly… Supporters say it raises an important issue on behalf of people who commonly have little voice in public discussion, and who are not well represented among the new, arts-related businesses along Waterloo. They point to the dialogue that has resulted from the mural.”

The dialogue, in fact, continued with a public forum presented specifically to discuss the mural and all the issues raised by it, held at the Beachland Ballroom Tavern. The forum started with a discussion between Callahan, queer POC activist Diedre McPherson and author/ artist Kate Sopko. The forum gathered a reported 80 people, and addressed subjects like how art is received in a community space, the consequences of public art and the power of public artwork. Councilman Polensek reportedly  attended briefly, made a statement denouncing the mural, then left to go to a City Council meeting.

However, the discussion continued, with attendees breaking into small groups mediated by the Cleveland Mediation Society. According to attendee Daniel Gray-Kontar, Executive Artistic Director of Twelve Literary and Performance Art Incubator, the discussion was “imperfect” as the Councilman, property owner and artist were not involved, but still gave life to the notion of public art as a generator for community transformation in East Cleveland. Gray-Kontar added that the public discussion concurred that “the message of the mural needed to stay, regardless of the aesthetic,” and that most folks wanted Mundo to come back and finish the mural.

The discussion was also important because it brought unspoken conversations about race, police brutality, gentrification, censorship, and the role of public art out into the open: “What happens when a community has to unpack its differences?,” Gray-Kontar pondered, noting that the Collinwood neighborhood has an interesting dynamic, with an enclave of arts-minded white residents within East Cleveland, an area which is “95% black.” Cleveland overall, he added, is the fourth-most segregated city in the country; the segregation is “very much in your face, depending on what side of the river you’re on.”

Because of this, he said, there’s a “sense of profound disempowerment [among] artists of color here.” The “137” mural not only addressed this, but “launched a community dialogue [around] a symbol of black erasure. By erasing the symbol of erasure, it’s opening up a new dialogue.”

Wait a minute. Erasing the symbol of erasure? You read that right. Despite the community conversation and consensus support for the mural’s message, “We woke up in the morning, [and] we found the mural painted over,” Gray-Kontar said. 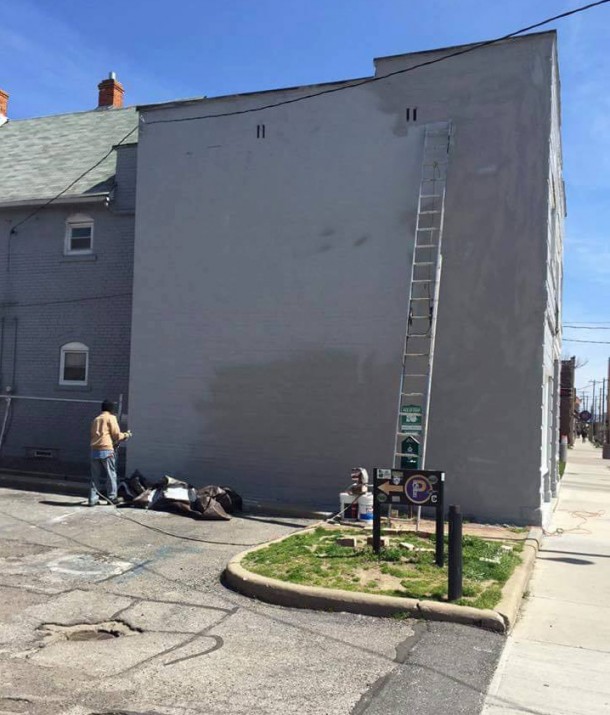 The “No Convictions” wall, after the buff

That was unfortunate, he said, because it made the public forum seem disingenuous, that the community’s input wasn’t actually a part of the decision-making process around the mural, which may have come down to back-channel conversations between the Councilman, the police, and the property owner.

“The mural was a great catalyst for conversation, bringing people together,” Callahan said, adding that she’s sorry it’s been painted over. “We still need to have many more conversations. Not just about police brutality, [but also about] redevelopment – [there are] a lot of different people in the neighborhood, how are we serving them?… About [the]  energy artists bring to neighborhood, not just [using] them for economic development.”

At this point, it’s unclear what the next steps will be. CRP hopes that the intention of the community, to offer Mundo the opportunity to form a more detailed visual narrative and complete the mural, will be honored.  It’s also possible, however, that future murals commissioned through Waterloo Arts will face a stricter design review process, which in a worst-case scenario would result in a chilling effect on political expression and art which upholds social justice. On the other hand, Gray-Kontar says he is intentional about using public art to bring about social transformation, and further exploring models which do that.

At the end of the day, CRP can’t help but think that, even though the mural was ultimately buffed, it upheld what street art and public art should aspire to be – a jumping-off point for conversations which need to happen and, in some cases, are long-overdue. No matter whether it’s Cleveland, Oakland, Ferguson, or New York, as Gray-Kontar said, “What community doesn’t have a lot more to do in this regard?”