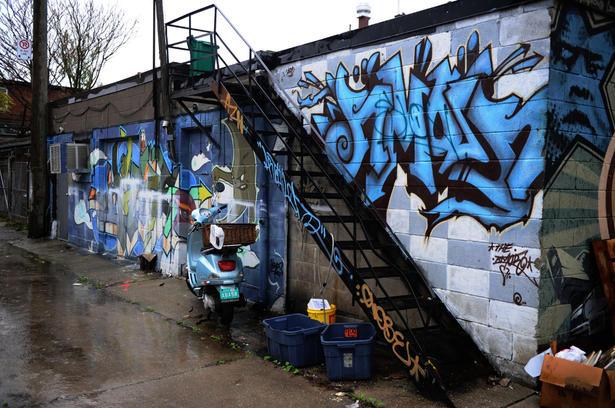 This is is a really interesting article on Toronto’s new policy toward the protection of “graffiti.” On one hand, we can commend that Toronto is stepping up to create protections for artwork that may not have been authorized, but that the community and the property owner want to keep. We strongly commend them for this goal. It is common sense that artwork that a property owner wants on their property should be protected from city vandalism and removal. Vandalism should be defined as unwanted destruction of one’s property.  If the artwork is desired by the property owner, then it is not vandalism and definitely not a crime. And that is where Toronto’s approach becomes questionable. Toronto is creating a committee that would allow property owners to apply for permission to keep “graffiti” on their buildings. Why do we need to ask to keep artwork that on our walls. If we gave permission to the artists, before or after the fact, then the agreement is between the artist and the owner. The city does not need to be involved. The role of the committee is simply to sanitize and censor any artwork is they, a group completely unrelated to the property, deem aesthetically unappealing. And, of course, this law will only be applied to “graffiti,” the derogatory media term for aerosol culture that implies simplicity and ugliness. Will they apply this law equally to brush murals or tile mosaics? It is highly doubtful. Aerosol writing, because of its association with inner-city youth of color, is being given additional hurdles to jump through to achieve its “legitimacy” in the eyes of city governments. How can a legal piece of artwork be considered vandalism? Answer: make up a special set of rules to criminalize a specific aesthetic. This inherent racism towards the aerosol and hip-hop cultures has been asserted since their inception. Aerosol writers and their descendants are the highest demand in Museums and high-end Galleries. Some of their works rival Picasso and Monet in cost. Yet, since the beginning, the mainstream media and societal gatekeepers have questioned aerosol writing is art and hip-hop is even music. Toronto’s first steps towards mural protection must be a true step forward and not just a further promotion of the double-standard against the aerosol aesthetic. CRP has outlined a more progressive prescription that will be implemented in Richmond within the next two years.

Agnes Hanna has dealt with her fair share of graffiti in the 54 years that she’s owned the two-storey building at 895 Queen St. West.

Indecipherable scribbling has been spray painted on her front door. Walls have been tagged. She’s removed the graffiti every time, disappointed that people could be so careless, so “cruel.”

But now, after the city issued an order for her to remove the latest smattering of paint from her property — thick orange letters painted on the west side of her building near the roof — the 75-year-old landlord has changed her perspective. She wants to keep it.

The piece of graffiti is one of nine to be discussed at this week’s meeting of the city’s new Graffiti Panel. The five-member board of city staffers will rule for the first time on whether such murals constitute street art, or vandalism. It’s the culmination of the city’s new graffiti approach, in the works for more than a year.

“It’s a great new thing,” said Robert Sysak, executive director of the West Queen West Business Improvement Area, which is supporting Hanna’s Graffiti Panel application to “regularize” the painting on her building. “It’s a move in the right direction for sure.”

Graffiti was highlighted at City Hall after Mayor Rob Ford was elected. In his inaugural speech, he spoke of the need to reduce graffiti.

In June 2011, a report on Toronto’s graffiti policy recommended the creation of a panel that would allow property owners to apply for permission to keep graffiti on their buildings. Previously, violation notices were issued when graffiti was spotted, and owners were ordered to remove it at their own expense. Hanna said she has had to pay more than $90 an hour to have it removed.

According to the report, the city spends more than $1 million per year to clean up graffiti and enforce the rules. It noted that many businesses were “re-vandalized within a very short time” of removing graffiti.

For Sysak, the new rules — which went into effect Jan. 1 — will give people more of a say in how to deal with graffiti on their property.

“It’s an opportunity for businesses and artists to put some work up,” Sysak said. “It’s a progressive thing.”

Business owners like Hanna argue that acceptable graffiti not only looks nice, but also prevents there being a blank canvas for itinerant vandals to repeatedly tag.

“It might not be Picasso, but it’s a million times better than the random vulgar graffiti that kept popping up in the past,” wrote the property owner at 947 Kingston Rd. in her application to the Graffiti Panel to keep the mural on the side of her business.

Under the new rules, the city defines “graffiti art” as: “Markings made or affixed to property that are approved by the property owner or occupant, where the markings aesthetically enhance the surface they cover and the general surroundings, having regard to the community character and standards.”

Graffiti “vandalism” is: any markings not currently exempted or regularized by the city, and was either made without permission of the property owner, is considered to be a “tag,” is believed to possibly “incite hatred or violence” or “contains profane, vulgar or offensive language.”