A Mural For Jennifer

Home A Mural For Jennifer 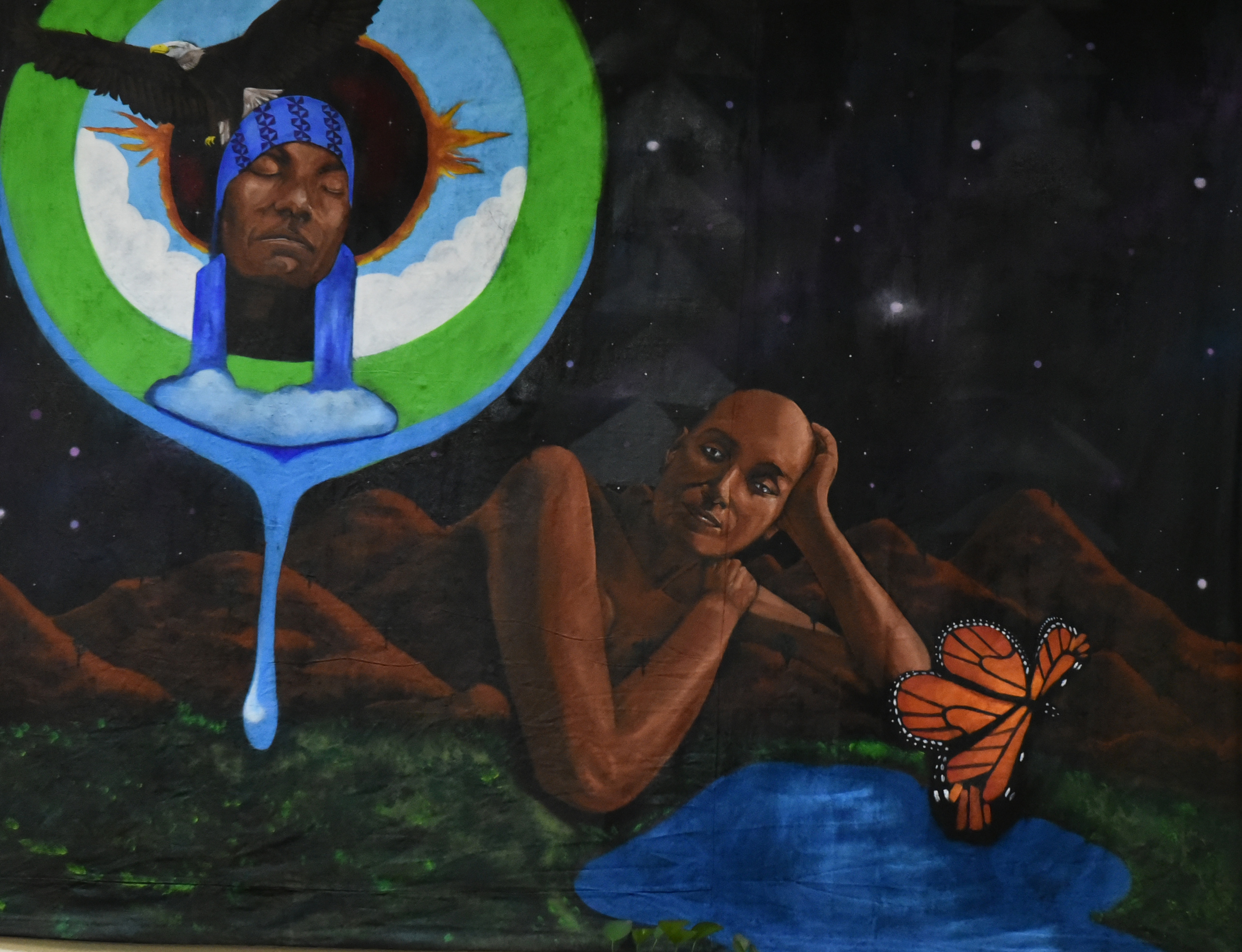 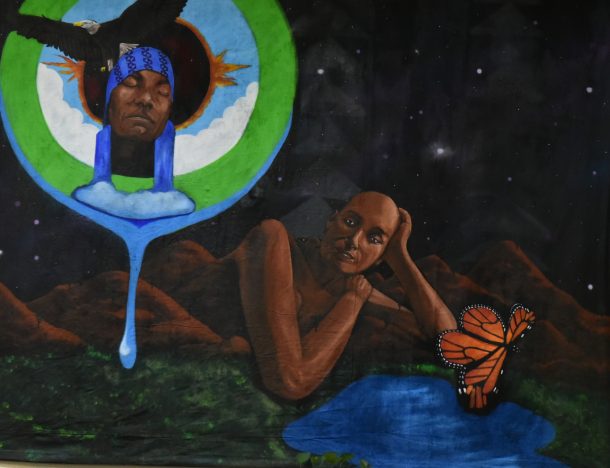 This past November, CRP Executive Director and Founder Desi Mundo unveiled a new mural at the Eastmont branch of the Oakland Library. The painting was the artist’s most deeply-personal work to date: a portrait of his late wife, Jennifer Ana’ Finefeuiaki, who transitioned this past March, following a courageous battle with pancreatic cancer.

The mural dedication ceremony was well–attended by Mundo’s friends and family, along with Denise Pate of Oakland’s Cultural Affairs Department — who funded the project — and a few library visitors who became inadvertent  witnesses to the proceedings.

The ceremony began with a few words from librarian Susan Martinez, and a commendation to Mundo from Councilmember Loren Taylor’s office, presented by Taylor’s chief of staff, Mona Barra-Gibson, who was followed by Tongan-American poet Loa Niumenitolu.

“I know English was brought by white people to our country. But when we speak it, we slur that language like sinews of vine floss extracting our teeth,  grind it with coral and and ironwood in our mouths, when we tell of the gritty taste, we’ve got to have a Tongan way of doing it,” said Niumenitolu. “As Tongans living in Oakland, living in the East Bay, living in the Bay Area, on Ohlone territory, that’s a really important thing for us, to do it in a Tongan way.” 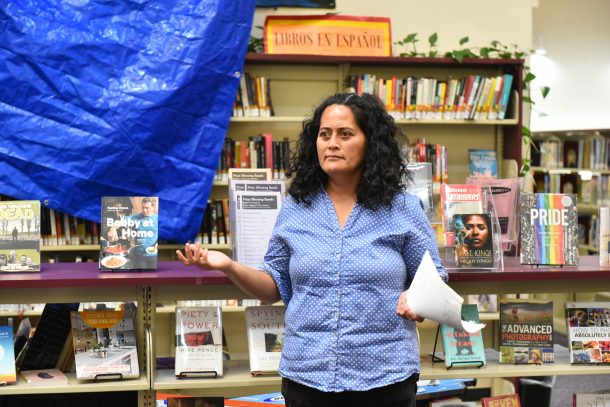 Niumenitolu then read a poem called “Tui Tui” — a reference to an indigenous Tongan grain used for cleaning, rituals, and ceremonies.

Touching, holding the trunk
of our coconut,
patting the tufts of moss
climbing it’s back.
Feeling the light breathing
of coldness in May.
Our God’s talking,
We’re startled by fleeting birds.
What does it mean when the mei
sheds it’s rusty leaves quicker
than the moko regrows?
Watch me…
What does it mean when
the daughter who loves you
is silenced by the sting of your palm
on her face?
For the siale to open in abundance
you must witness words, streaming
from lung’s of restless boys,
standing under light post shadows
of bold girls who laugh
like over boiling the tea pot.
The frothy white blossoms
brown as the kaloni kakala
climbs it’s trellis and rests
on pua trees and walk ways.
Out of this, something is being said.
Have you sat on the calf of the old ovava,
just above the knotted ankle?
Hung on to it’s brooding beard?
A god dropped a tuitui,
you picked it up, cracked it, chewed it
with mohokoi into a lather,
your knowledge of home.
I’m talking to the children in our bellies,
almost ripe.
No, Tukulaumea, it’s not for you to be
confused with who is the god?
What god?
Is there a god, where is that god…
See
The same tuitui stands, the one we gatherred
lather from when my mother was young.
Rub your bodies,
Scents of petals, bark, hard nut, heavy rain.
Breezes of salt, milk, earth.
It is a fananga, a riddle, a way of life.
It is a god, our knowledge
our resistance
the scent of tutui
still supple on our skin.

Then came the unveiling of the mural.

The crowd collectively gasped, then started applauding. Words like “nice.”“beautiful,” and “excellent” were audible over the clapping. 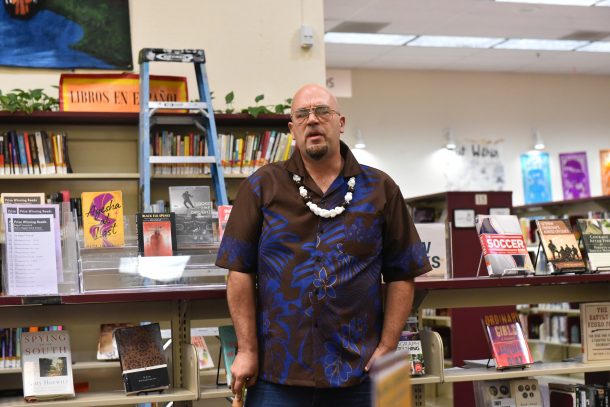 “This piece is about the courage of people with terminal cancer. And the separation from that. As your spirit goes one way, your body goes the other,” Mundo explained.  “From below the ground, you have Jen meditating on that transition upward, through the earth, through the sky, and through that little portal to the universe. And on the other end, you have her sinking back into the earth. To try to come to peace with it.” 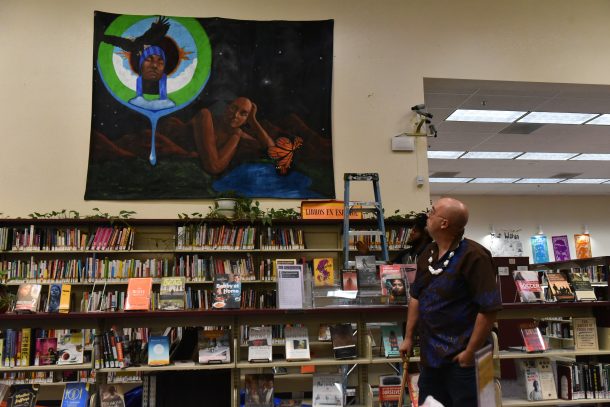 “Also, that little portal behind her head is an eclipse. It’s one of those rare occurrences. How unique and special each life is. That happens every once in a while, those miracles which come for us. Every life is like that. It’s also an eye, if you look closely, it’s an eyeball. The eye is that dream one of our relatives had for us to be here. So you come through the same way you came in. That doorway goes both directions. And on the earth, it’s like, finding acceptance in those moments. Jen was always more courageous than the rest of us about it.”

The butterfly, Mundo continued, represents our ancestors “meeting us, moving ahead of us, and coming back, showing us the way.  And the water, it’s just stillness, it’s life and it’s also that piece, that knowledge that resides in the earth.”

The triangles going up are a Tongan symbol “with a lot of meaning,” Mundo said. “It’s just ascension.This isn’t about death, it’s about getting ready for death. And how we do that in a profound way.

“Lastly, that little drop coming from the sky, it’s just how the earth recycles…. Life is gonna continue. That’s our hope and our dream. And that’s also the hope and the dream of the people who dreamed us.” 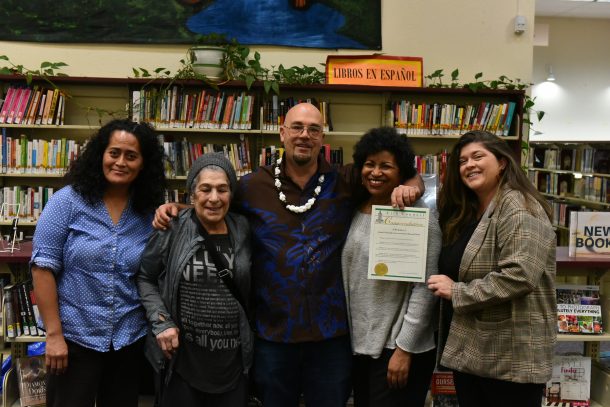 The mural painting and dedication ceremony were timed to coincide with NET Cancer Day and World Pancreatic Cancer Day. The painting will be on public display at the Eastmont library, but Mundo indicated it may also travel, to be included in future cancer awareness activities.

It can be collectively said that cancer sucks. But also that life does go on, and coming to terms with loved ones and relatives who pass away from cancer can help heal grief and a sense of loss. In the painting, Finefeuiaki–bald from chemotherapy treatments–looks peaceful and accepting. Her body morphs into a mountain, and where her hair would have been becomes the sky. It’s a fitting tribute. 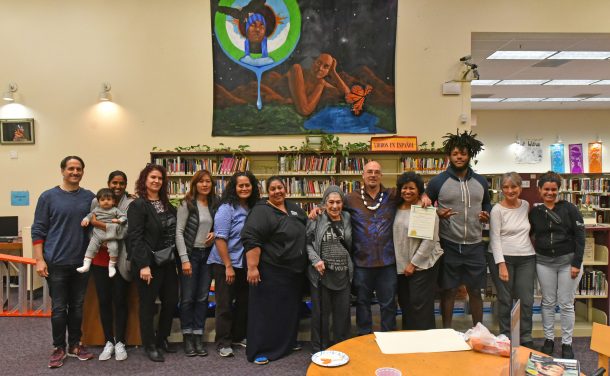 Given that Western culture often doesn’t deal with death very well, a final thought is that we can all learn something from how the Tongans understand death —  as part of the life cycle of nature.