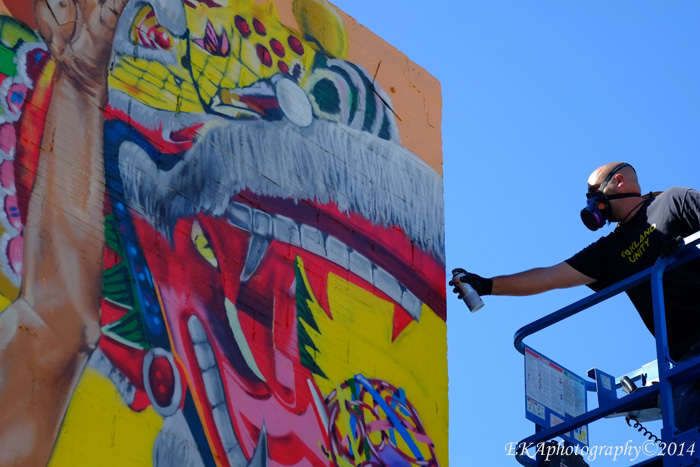 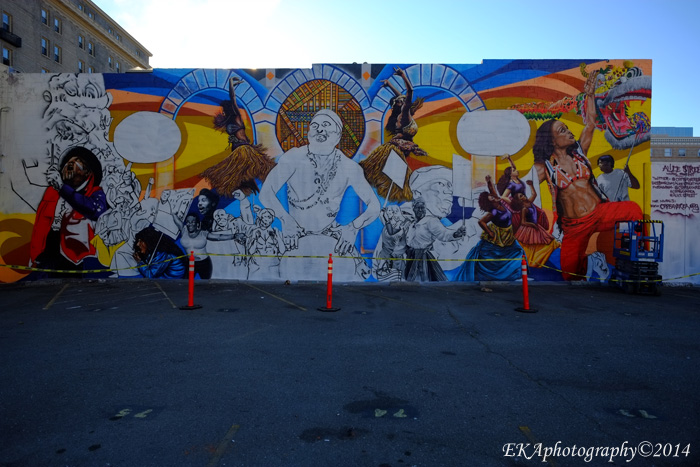 After a little more than a week of painting the wall at 14th and Alice, CRP is pleased to report the wall is nearing completion. This project has been a real eye-opener; the level of interaction we’ve had with the community has been unprecedented. It’s not an exaggeration to say the mural has started to become a magnet for community-building, even before it’s completed.

The project started with covering the entire wall—covered with unsightly and highly unartistic graffiti tags–with white primer paint. The next step was the outline. A video projector was set up across the street from the wall which projected the design sketch onto the wall. From there, CRP lead painters Desi Mundo and Pancho Peskador climbed into rented hydraulic lifts and methodically traced the outlines onto the wall. As the mural’s central figure, legendary Congolese drummer Malonga Casquelord, came into view, the wall seemed to shimmer with life. 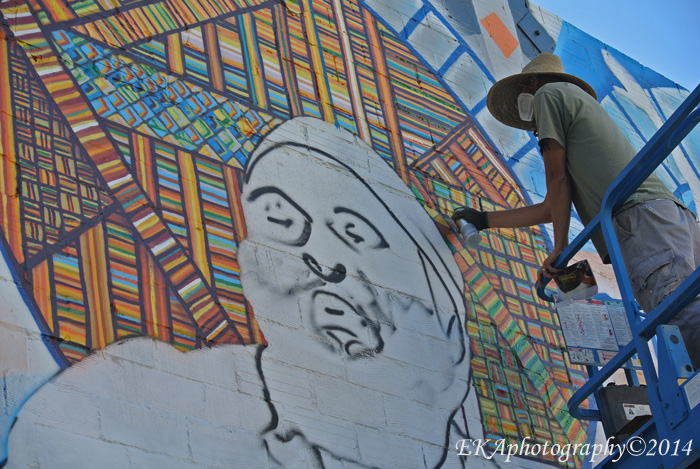 Once the outline was done, colorization started. Characters began to take shape, and backgrounds were filled in. Desi and Pancho worked long days, going back and forth between manning the lifts and working at ground level. Chinese Dragons, African dancers, protestors, indigenous musicians, historical scenes all took shape in vibrant hues. A neighborhood eyesore was now a source of neighborhood pride.

The mural location, an intersection bordered by parking lot on, the Hotel Oakland, and the Malonga Casquelord Center for the Arts, sees a fair amount of foot traffic daily. The parking lot is constantly busy with people coming and going. Numerous pedestrians pass to and fro. Parents arrive to pick up or drop off their kids at the Starlight preschool. While the mural painting was taking place, the Malonga center happened to have a theater production, which increased the flow of people.

Perhaps the most interesting thing about the mural creation process was the reaction of passers-by. Videographer Spencer Wilkinson noted that onlookers have returned, sometimes several times a day, to check on the mural’s progress. “It’s become a conversation piece,” he said. “People really feel like they’re involved in it.” For long term Oakland residents, especially those affiliated with the Malonga center, the wall represents a connection to a shared history. They’ve frequently brought others by to talk about the people painted on the wall, Wilkinson notes, adding that newer residents of the neighborhood see the mural as a sign that the quality of life in the neighborhood is improving.

“People are amazed at how fast the mural’s going up,” said Mundo, adding that he’s frequently being engaged in conversation while he’s painting. For him and Pescador, painting the mural is a heavy social and cultural responsibility. “Every inch, every character, every highlight, every knuckle, piece of fabric, shoelace, they’re each getting attention,” he said. 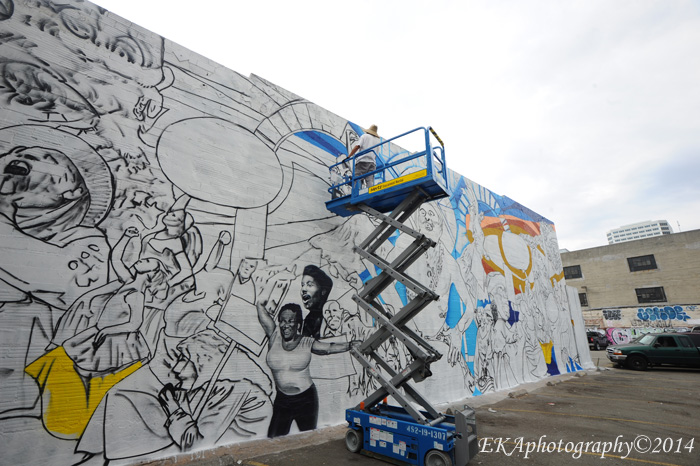 Some of the highlights, CRP staffers noted, included residents of Hotel Oakland playing Chinese flutes to salute the painters, as well as visits by D3 Councilperson Lynnette Gibson-McElhaney’s staff, African American media icon and neighborhood legend Jerri Lange, Casquelord’s son Kiazi, Peskador’s Chilena compadres, street art-collecting cholos, an Oakland Tribune photographer, friends and relatives of people featured on the wall, even some of the graffiti artists whose tags were replaced. “None of the feedback has been negative,” Mundo said; if anything, the response has been overwhelmingly positive. Many folks have shared photos on the Alice Street Mural Project’s Facebook page and Instagram, with the hashtags #AliceStreet and #CRPBayArea.

Final production on the mural is expected to conclude this week; stay tuned for details about the Phase I ribbon-cutting ceremony, tentatively scheduled for August 1.