The Community Rejuvenation Project was honored to be informed that its Alice Street Short film was accepted into the Top Shorts online film festival to compete with over 100 short films for prizes in 50 categories.

According to its website, “Top Shorts is the world’s leading online film festival, showcasing outstanding short films from around the world to an audience of film fans and filmmakers. Top Shorts is an official event on IMDb, and was recently ranked 8th Best Reviewed Festival out of over 4,300 of the world’s best film festivals (and 1st from the online festivals, FilmFreeway May 2016).” 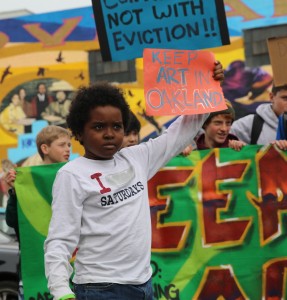 The Alice Street Short captures moments from the struggle for equitable development the centered around CRP’s Universal Language mural at 14th and Alice Streets.

CRP’s “Alice Street Short” is a window into the intersection of cultural resiliency and the impacts of gentrification. The story revolves around two Oakland muralists, Pancho Peskador and Desi Mundo, who take on a commission to paint a series of walls in Oakland’s downtown. The artists decide to honor the history of two different cultures which intersect at the mural site – the Chinese-language community of the Hotel Oakland and the Afro-diasporic community centered around the Malonga Casquelourd Center for the Performing Arts. As part of their creative process, they engage members of these communities, conducting interviews with culture-keepers and neighborhood residents which reveal a shared history of cultural resilience and resistance to displacement.

From May 1 – 14, all of the films will be available for viewing through the site and viewers are allowed to rate the film from 1 to 5 stars. The link to the Alice Street Short film page is here.