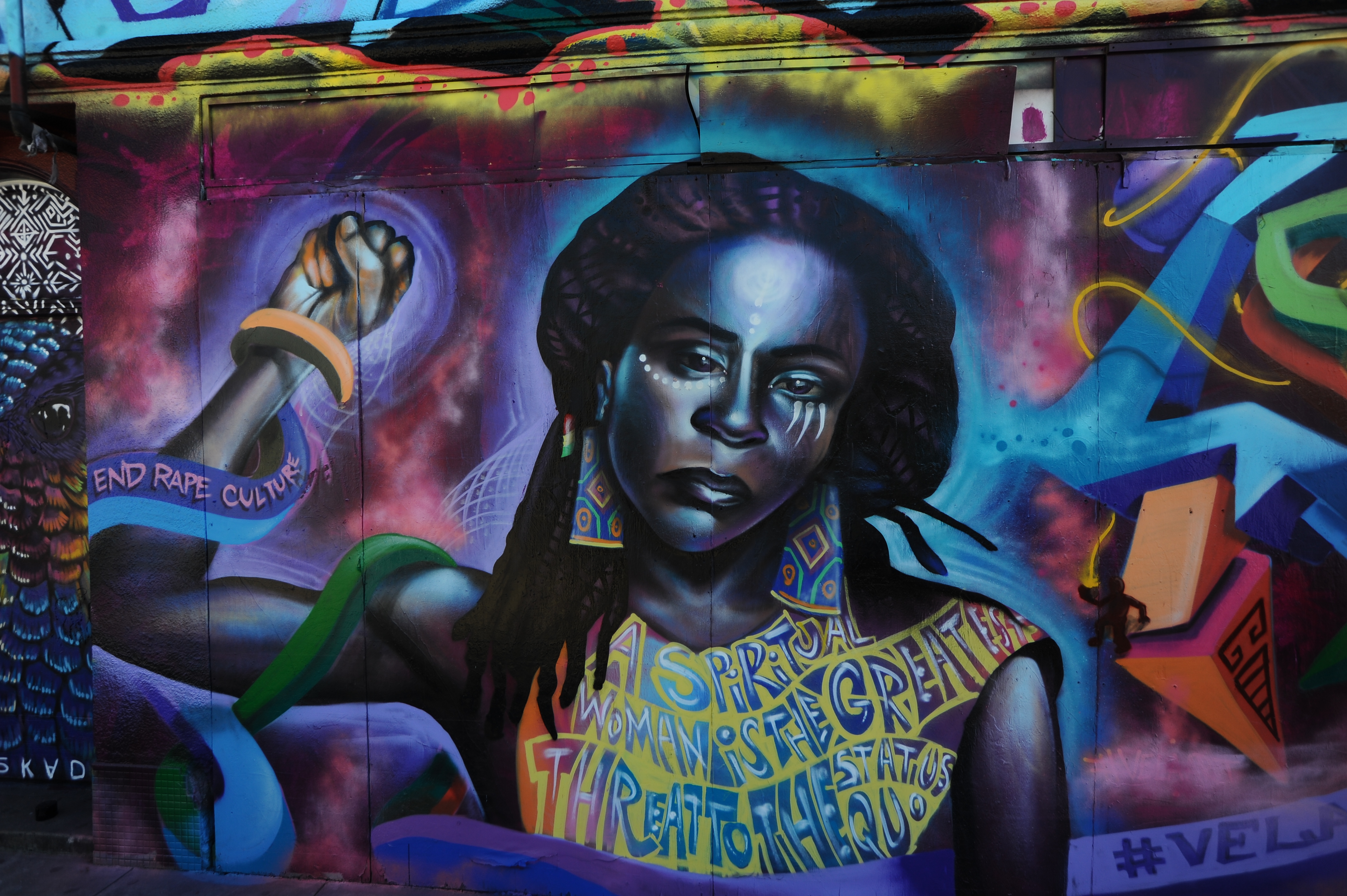 In Part One of this series, the Community Rejuvenation Project’s (CRP) work and murals in general received unexpected praise from an unlikely source – a city abatement worker known as Erase, who publicly stated abatement was a waste of money, and that murals might be a better, more cost-efficient, alternative. The post went on to detail extensively why abatement is a money pit which is problematic on many levels, and propose a solution: shift some of the more than seven-figures Oakland currently spends on graffiti removal to a dedicated mural program. In Part Two, CRP explores this alternative solution in depth, examining immediate achievable outcomes  and foreseeablelong-term results – some of them subtle and even serendipitous.

While graffiti removal by painting over tagged surfaces, also known as abatement, is a cost-inefficient solution which has not been shown to be sustainable without incurring ever-rising costs, murals have not only proven effective when they have been commissioned as an abatement strategy, but offer more benefits than buffing walls . 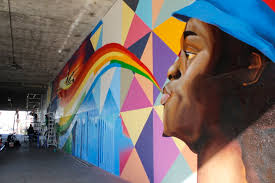 This mural brought vibrancy to a bleak freeway underpass. (AHC.org)

Specifically, the murals funded in the past three years through Oakland’s anti graffiti mural program have effectively reduced blight, increased quality of life, and required little to no maintenance. That program was a one-time allocation, however, and is unlikely to be renewed (partially because of administrative and logistical issues, which included one Councilmember allocating half of his $50,000 allocation to himself, with no clear deliverables).

While some murals are funded annually through the city’s Cultural Fund Program, recent years have seen a deluge of new applicants and a corresponding reduction in grant amounts, causing muralists to cobble together funding from multiple sources. Another primary source of funding disappeared in 2012, when the city dissolved its Redevelopment Agency, which had previously funded anti-blight murals. 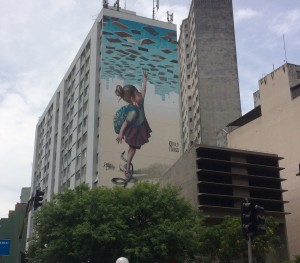 This mural in Sao Paulo, Brazil, shows what is possible in public art projects. (Ella Jessel/Vice)

Nevertheless, a strong case can be made that Oakland should have a dedicated mural program, and if the goal of city abatement is to reduce blight, why not do so in a way which also enhances the city’s image and could also result in significant long-term cost savings over current practices?

The aesthetic of murals can create positive mental health for communities. (Eric Arnold/CRP)

In addition to blight reduction, the many benefits of murals have been identified through both anecdotal reporting and data-driven findings. As an Americans For the Arts blog post  stated, “Public art can create community attachment, if we overcome perceived barriers and open pathways for engagement.” 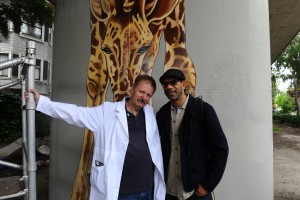 Though public art can be difficult to valuate, it’s been linked to everything from enhancing economic development efforts, to reaffirming a sense of community, to evoking positive feelings of mental health.

A growing body of research indicates the benefits of public art are vast and sundry, and may only be limited by the extent to which data has been collected. A 2012 survey conducted by the Knight Foundation which found that the aesthetics of a place–which includes public art–was more highly valued than education and safety as a “driver of attachment.” 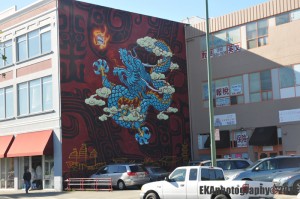 That same year a Philadelphia survey found that viewing public art was the second most-popular activity among residents. Philadelphia’s Mural Arts Program (MAP)has been conducting ongoing studies on the impacts of community murals, and recently partnered with behavioral psychologists, Yale researchers, and community organization to establish the Porch Light Initiative, which examines the impacts of creating murals on individual and community healing, recovery, and transformation. 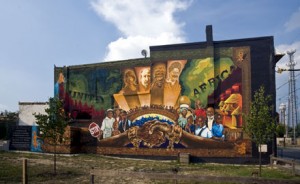 The community aspects of murals have also been noted in Chicago; while St. Louis celebrates the 20th anniversary of its annual “Paint Louis” mural festival  this year. And in Alberquerque, a 2013 study found that public art not only positively impacted more than half of the city’s visitors, but had even greater resonance among local residents — 86% felt public art improves the quality of life, while 80% said it enhances their experience as residents.

Closer to home, in San Francisco’s Mission district, the vibrant, world-famous murals of Clarion Alley resemble an outdoor public museum, while the beloved Precita Eyes center has evolved into a full-fledged mural arts organization offering tours, classes, and even a community art store. 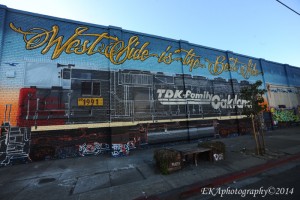 In Oakland, there are many murals which reflect civic pride and lend the city its cultural identity. CRP’s “Universal Language” mural at 14th and Alice has become an iconic symbol of cultural diversity –and featured in international travel magazines and local media; Attitudinal Healing Connection’s “Superheroes” series has transformed bleak environments underneath freeway overpasses; cultural-themed murals in Chinatown have embellished neighborhood character; the Steph Curry mural at Northgate and 27th celebrated the Warriors’ 2015 NBA championship;

Vogue TDK’s “Oakland Is…/West Side Is The Best Side” infused vibrancy into a non-descript part of West Oakland; Estria’s “Water Writes” mural in Downtown combined artistic beauty with a strong message; Dan Fontes recently restored giraffe and zebra murals brighten up streets near otherwise-dull 580 entranceways; murals commissioned by East Side Arts Alliance in the San Antonio district have furthered the Chicano/Latino and Afro-Caribbean mural tradition; and who could forget the “Oakland is Proud” mural, or Fontes’ ode to Lake Merritt at 27th and Webster–which ran for 26 years? There’s even a Flickr pool dedicated to Oakland murals, which contains more than 4500 photos.

With all that in mind, does it make sense to keep pumping money into what is a best a short-term, cost-ineffective solution–painting over walls–when some of that money might be better spent re-establishing a city-funded mural program?

If done right, a mural initiative could:

Honestly, this list could go on and on, and still not exhaust every potential benefit a mural initiative could bring to Oakland. There’s also precedent for such a vision: Philly’s MAP has partnered with the city’s Public Works department on mural projects — creating a collaborative model which could easily be replicated in Oakland. All it takes is next-level thinking and the intention to instill creativity into the built environment. 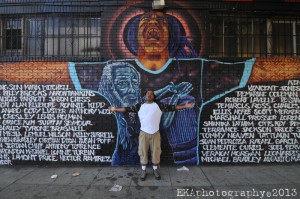 This memorial mural helped to cool down a violence hotspot in East Oakland. (Eric Arnold/CRP)

On that note, it seems appropriate to end with a quote from public art researcher Katherine Gressel: “we should not forget the ability of art to affect people in ways that may seem intangible or even immeasurable.”