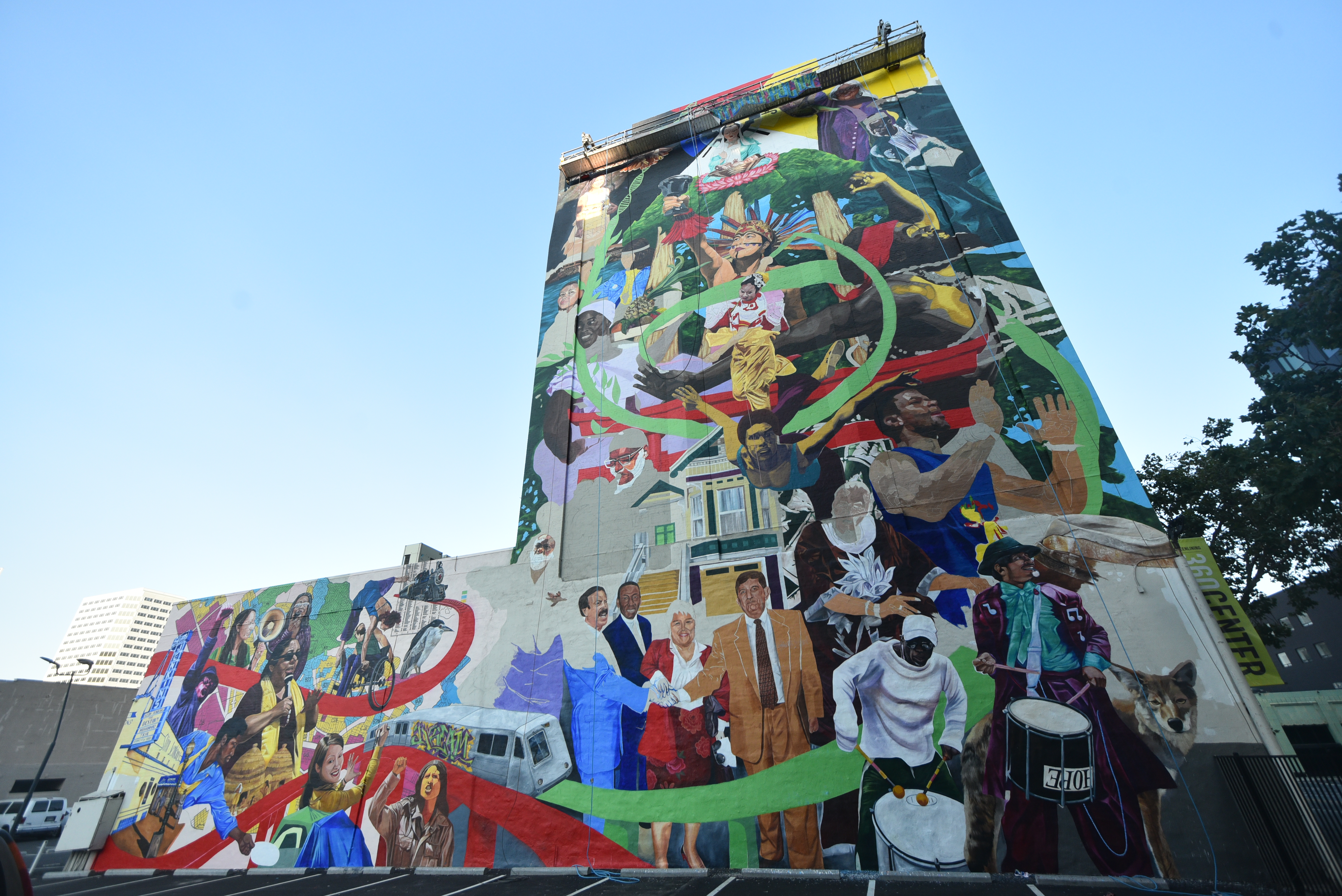 In the midst of the strangest summer in modern history–thanks, COVID!–progress is still being made, if you know where to look.

Up in the skies, that is. Eight stories above ground level, one block on 14th St. in downtown Oakland is quietly being transformed into a vibrant artistic statement which resonates with energy, vitality, and fierce, passionate conviction.

If you’ve been following the story of the AscenDance mural, whether through this blog, or as an observer passing by, you’ve seen a once non-descript wall slowly evolve into a ginormous mural.

It’s been a slow but steady process, which began earlier this year, way back in the pre-pandemic good old days, with some community input and feedback sessions. These were followed by more intensive design review sessions.

In May, site prep began. Later that month, after the entire wall had been gridded, sketches and outlines followed. And then, actual painting. The muralists–read more about some of them here and here — worked on the lower section using scaffolds or painting at ground level to bring the design into its first stages of visibility.

The upper section required a more focused, technical approach. Accessing the wall itself was made possible by a swingstage, which required safety harnesses.

Each day, the process repeated itself, and sketches became faces, outlines became colored lines. Shadow details emerged. It was like watching a visual garden grow.

The lower part of the wall was the first to come into view. it tells a story of redlining and inequity connecting communities of color through shared struggle and resilience. At a certain point, the redline–rendered as a BART train track–switches tracks. The line becomes green and extends up the wall, becoming more fluid and abstract, wrapping around various forms of cultural and spiritual expression.

In addition to the redline/train tracks, the point of historical inequity is further reinforced by stark district maps which show actual redlining. Against this backdrop, the characters all pop out, as if to symbolize the resilience it takes to overcome systemic oppression in a collage of resistance and dynamism.

In the past couple of weeks, however,a lot of work has been done on the upper section of the wall, the most challenging aspect of the mural due to its sheer size and the scale of the images. Some of the characters are several stories tall, and not only are these figures writ large, but there is an incredible amount of detail from top to bottom, from trees to hummingbirds, to ribbon dancers.

The most recent development is that the top and bottom of the wall have reached a point of connectivity. There is still a long way to go, but you can see the finish line from here.