The Ascension of the “AscenDance” Mural

HomeThe Ascension of the “AscenDance” Mural 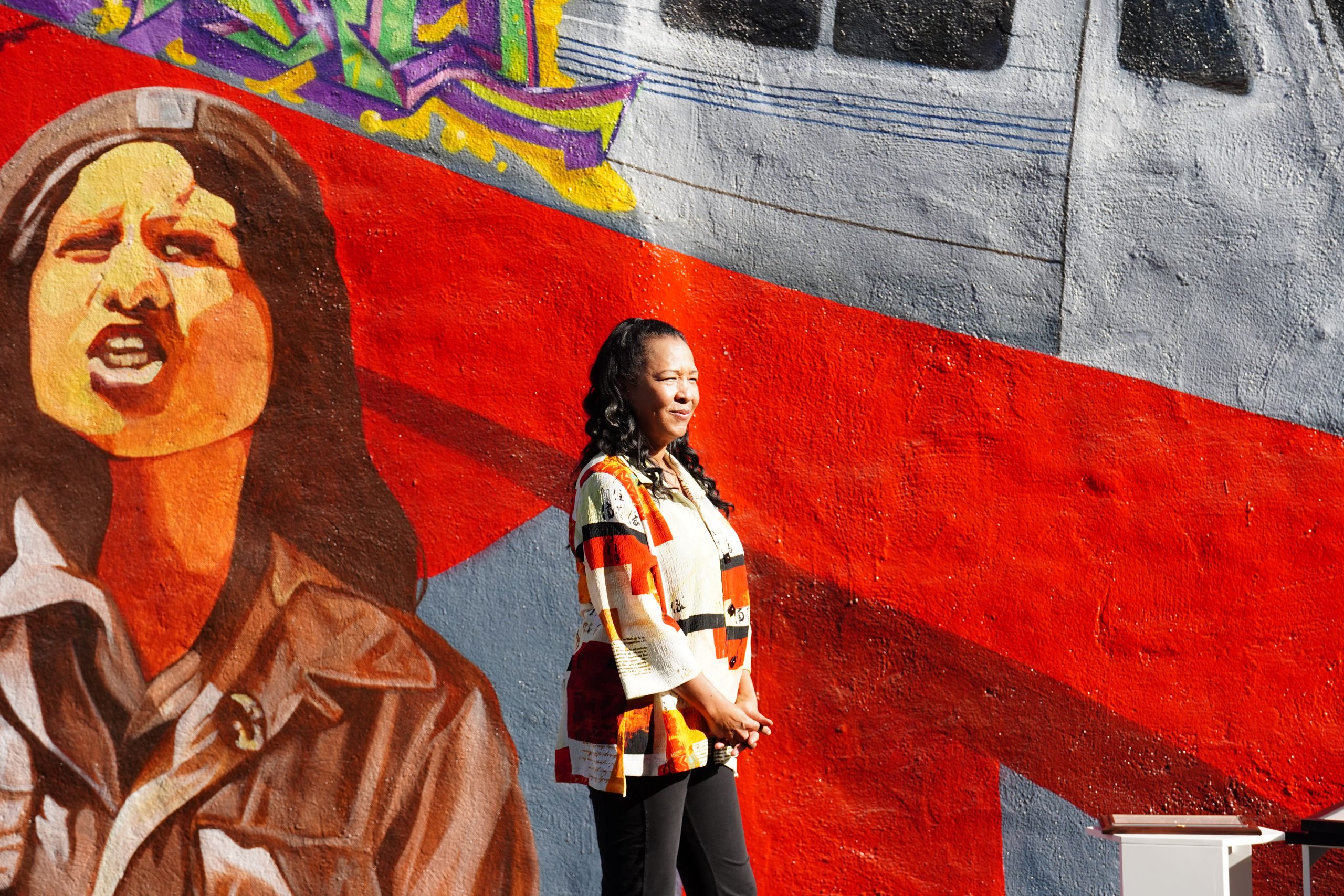 On October 16 2021, “AscenDance,” a large-scale mural produced by the Community Rejuvenation Project, in partnership with The Greenlining Institute, finally held its dedication ceremony. The eight-story mural was completed in 2020, but the official celebration was postponed twice due to the pandemic. Although public safety dictated that the event not be the massive block party originally planned, the scaled-down celebration was attended by approximately 75 people — including several elected officials, Oakland Cultural Affairs Department staff, Greenlining staff, and many of the people featured on the mural itself, such as former San Francisco Supervisor and Greenlining Academy alumni Jane Kim and Dance-A-Vision founder and director Carla Service.

CRP founder and executive Director Desi Mundo prepared a short speech, in which he acknowledged the artists and inspiration for the mural, reiterated the need to support the arts, and reminded attendees that art can be a powerful force in leveraging justice. After thanking lead artists Marina Perez-Wong, Elaine Chu,  Priya Handa, and Lisa Max, and naming funders California Arts Council and Creative Work Fund, Mundo told one of the many stories behind the mural’s origins.

“This piece was really primarily a victory from fighting with developers. Thank you to the people who are part of the Community Coalition for Equitable Development who are here — Eric (Arnold), Lailan (Huen). We’re very thankful for that effort, that we continue to go after these developments. There were very strong victories that took place that were led by artists. It was not led by the policymakers, it was not led by the mayor’s office. It was led by artists who demanded that we get community benefits for developers moving into these neighborhoods and gentrifying.

“We actually want to see policies that don’t make us chase around these developments as they go up. The easy way we can do this, one, is to defund the police, and put more money into the arts.”

Mundo then made a plea for transparency surrounding the FBI shooting of Perez-Wong’s cousin, Jonathan Cortez. “I have to say this: Marina’s cousin was just killed by the FBI three weeks ago. And we’re still waiting on answers from City Hall about what OPD’s involvement was. So instead of coming here and dancing, we’d like to actually get that information. I’m pretty offended by that, and I want justice for Jonathan Cortez.  (The family has called for the public release of the full video of the Sept. 13  incident, which took place inside a Fruitvale district convenience store, and for law enforcement to end its alleged harassment of Cortez’ supporters.)

While Mundo’s comments were an off-note to the overall tone of joy, they also serve as a reminder of the continued struggle and resilience of communities of color who face systemic inequity every day, and are frequently the targets of police and government violence. Before making this statement, Mundo looked around for mayor Libby Schaaf, who spoke earlier, but she had already left.

He went on to acknowledge Papa Zak Diouf of pioneering African dance company Diamano Coura, who recently joined the ancestors, before talking about the importance of supporting culture as a core Oakland value.

“All of these folks here on the wall are fixtures within the Oakland community. And there’s so many more that we need to acknowledge. That’s why I’m asking for folks to continue to invest in the arts. From a city, state and county wide level, we need more support so that Oakland artists can actually thrive. That’s what this mural is really about, it’s not just about treading water anymore. We actually want to be able to live comfortably.”

The “AscenDance” mural is in and of itself a testament to cultural equity. The mural honors activists and organizers spanning multiple generations and cultural backgrounds, from Black Panthers, to the American Indian movement, to Brown Berets, to the Chinatown Coalition, to Ohlone peoples. It also features Greenlining’s founding leaders Ortensia Lopez, Bob Gnaizda, George Dean, and John Gamboa. The mural connects this important policy and organizing work to the cultural activities of Malonga and Kiazi Casquelourd, the Dioufs, Halifu Osumare, Theo Williams, Carlos Aceitano, and others.

The transformative efforts of this dynamic group of folks are placed in deeper context by symbols of barrier to equity, from railroad and BART tracks, to historic redlining maps. The train and subway tracks are represented by a red line, which changes to green, encircles culture-keepers, and ascends up into the heavens, alongside Mundo’s late wife, Jennifer.

Not only does “AscenDance” reflect the values of CRP and the local community, it also upholds what Greenlining is about. The day began with a testimonial from Greenlining President Debra Gore-Mann,

“This mural’s addition to the Oakland cultural landscape is exactly what our founders had dreamed of,” Gore-Mann said.

“Art and culture plays a fundamental role in ensuring that communities of color can build wealth, live in healthy places, build economic opportunity, and are ready to meet the challenges posed by climate change. We see the value of art in changing hearts and minds, creating and keeping culture, and telling stories. Rich stories of our community.

“This mural we see today depicts Oakland’s rich history of activism, and resistance in the face of historical redlining, and presents today the gentrification that still continues. It connects our historical and practical policies of racism and redlining, drawing red lines around our communities of color, marking them off-limits to investments with a transformative greenlining path to racial equity, paying homage to impactful community leaders, and symbols of cultural thriving that represents the heart and soul of Oakland.”

Greenlining Board of Directors co-chair Tunua Thrash-Ntuk explained the vision of the organization’s founders. “In the mid 1970s, a group of leaders from the African American, Latin American, Asian American and disabled communities came together around a visionary set of ideas. Instead of simply fighting for instututionalized change around discrimination and redlining, we should work proactively to bring investments and demand better opportunities for our community. Instead of redlining, we would create greenlining.

“Ortensia, thank you for being the woman at the center of this. I wear red today because you remind me that I should always show up in the room, be seen, be heard. They will know we are there.

Bonta was effusive in her praise. “Look at this amazing mural. Today, with gratitude to the Greenlining Institute and the Community Rejuvenation Project, we get to celebrate the larger than life vibrancy of Oakland’s history, our multiculturalism, our respect for the land on which we stand, and the legacy of resistance and activism that makes Oakland the baddest, finest, most awesome District to be a part of. The most progressive place to be a part of [in] the state of California.

“We have here all our grassroots leaders, all captured in a beautiful, larger than life, eight story mural here. For all those who walk and visit in this corridor for ages to come we will have on full display our local heroes, our culture keepers, our artists, our activists. People like Greenlining’s early leaders and founders, who are standing here today and who I’m so blessed to be able to meet today. Chinese American activists like Lailan Huen, members of the Black Panther PArt, Filipino American organizer Terry Bautista, and native American leaders like Richard Oakes and Morning Star Gali here.”

Following Bonta, a representative from Barbara Lee’s office made a brief statement: “We commend the artists for their commitment in helping to preserve the rich history of activism and political resistance here in Oakland.”

It was a little odd to see Schaaf praise “social justice warriors” given that many of those warriors’ battles have been against her policies. The mayor, who will be termed out in 2022, compounded the irony by joining a dance circle that jumped up to groove to the sounds of Kiazi Malonga’s group. Suffice to say that rhythm is not her strong suit.

But while the gentrification that has happened on Schaaf’s watch may lead some to doubt the sincerity of her comments, it was still empowering to hear elected officials publicly recognize culture as a community value. Bonta noted that speaking at the dedication was one of her first official acts after being elected. She’ll be reminded of that, she added, every time she walks down 14th St. or attends an event at Greenlining’s building.

Gentrification has put artists, and the communities they come from, at high risk of displacement. But it’s also lent an urgency to the need for cultural preservation. Public art such as the “AscenDance” mural, helps make these efforts visible to all. That’s especially important in Oakland’s rapidly changing downtown, a place dotted with new development. While many community organizations don’t own their own building, making permissions for similar murals challenging, “AscenDance” stands as a towering and vibrant reminder of what is possible.