At Harlem Hospital, Murals Get a New Life

The WPA murals reflect more than the just a time when the arts flourished. They also demonstrate the way that arts have been integral in creating a thriving economy as well as defining culture in historical periods. WPA murals put a lot of artists to work and created something powerful and lasting. These ideas have slowly been lost as the US government continues to focus its support onto the military and prison industrial complexes. There are alternatives to building an economy on slavery, misery, imperialism and death. Murals are one of them.

When the Works Progress Administration commissioned murals for Harlem Hospital Center in 1936, it easily approved the sketches submitted by seven artists, which depicted black people at work and at play throughout history. The hospital, however, objected, saying four of the sketches focused too much on “Negro” subject matter and that blacks “may not form the greater part of the Community” in years to come.

Protesters rallied around the art, though, lodging complaints as high as President Franklin D. Roosevelt, and the murals ultimately prevailed.

Over the years, those wall paintings deteriorated or were obscured by plaster. Now they have been restored and brought front and center as part of a new, $325 million patient pavilion for the hospital, on Lenox Avenue at 135th Street that will be unveiled on Sept. 27. 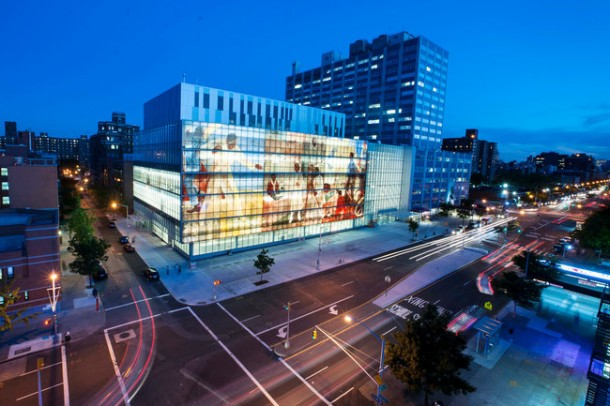 The artists — the last of whom, Georgette Seabrooke, died last year — were not well known and their murals portrayed ordinary people going about their daily lives. Vertis Hayes’s “Pursuit of Happiness” panel traces the African diaspora from 18th-century African village life to slavery in America to 20th-century freedom; from agrarian struggles in the South to professional success in the industrialized North.

Ms. Seabrooke’s “Recreation in Harlem” depicts children roughhousing, a couple dancing, a group of women chatting. After decades of renovations and building changes, some of the murals had all but disappeared. But they were rediscovered in 2004 during a campus modernization project by the architecture firm HOK. At that point, all conservators could see of the Seabrooke mural was the left-hand corner where the artist had signed her name.

Part of the hospital’s mandate to the architects was to save the murals, and the cost has been considerable, topping $4 million, which had to be raised privately.

“We were going to preserve these national treasures,” said Deborah Thornhill, the hospital’s associate executive director for strategic planning. “They’re an important part of the history of the hospital, the community and the country.”

Where the murals had been visible only to staff members and patients, now they have a gallery all to themselves, visible from the street. Digital enlargements of three of the murals adorn the building’s 12,000-square-foot glass facade. These color images — printed on the glass using ceramic ink — are a city block long and five stories high.

“All the murals tell wonderful stories,” said Chuck Siconolfi, HOK’s senior principal for health care. “We said, ‘Let’s go beyond displaying these murals and make them emblematic of the whole community and its role in American life.”

“This was not only a cultural device but a therapeutic device,” he added. “They are as much a tool in the delivery of care as any radiological device or any scalpel.”

Because the digital copies of the murals are backlit, the facade essentially becomes a light box, “to the point,” Kenneth Drucker, HOK’s director of design, said jokingly, “where there could be some traffic accidents on the street.”

The facade can also be appreciated from inside the building, the architects said, since column-free corridors are directly behind it, and patients can look into the gallery from adjoining waiting areas and hallways. “When you talk to people about the murals, they listen politely,” Ms. Thornhill said. “It’s only when they walk in the gallery and see how awesome they are that you get the ‘wow’ moment.” 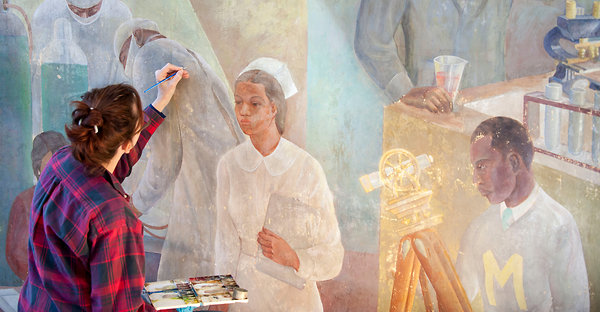 The other murals include Charles Alston’s “Magic in Medicine” and “Modern Medicine,” a diptych that highlights both traditional and modern healing practices in Africa and the United States. A ritual Fang reliquary sculpture from Gabon, in Central Africa, for example, is juxtaposed with a microscope. Ms. Thornhill said Mr. Alston featured Myra Logan, whom he would later marry, as a nurse in the painting; she was an intern at the time and eventually became a surgeon. Mr. Alston also included the microbiologist Louis Pasteur and a surgeon modeled after Louis T. Wright, the first African-American physician appointed to the hospital and a friend of the artist.

“The artist wanted to share the importance of African-American and white physicians working together toward a common goal,” Ms. Thornhill said.

More than 75 years ago, in response to the initial rejection of the murals by the hospital superintendent, the Harlem Artists Guild issued a statement with the Artists Union — copies of which were sent to Mayor Fiorello H. La Guardia and members of President Roosevelt’s cabinet in addition to the president himself.

The hospital had rejected the murals, citing the extent of the “Negro subject matter,” the possible demographic change in the neighborhood in years to come and the hospital’s perception that the murals would offend some blacks. Publicity about the controversy aroused support for the artists. The hospital’s commissioner eventually reversed his decision after determining that “there was no offense to Negroes in these paintings.”

The current restoration of the murals was overseen by the city’s Public Design Commission, which questioned whether it was appropriate to display the murals so prominently because, as a matter of history, they had previously been located largely out of public view.

The surviving son of Ms. Hayes testified before the commission that it was not only appropriate “but the correction of an injustice to have hidden them in a back corridor,” Ms. Thornhill said.

Although the hospital raised $4.2 million to restore the murals, it is still seeking funds to finish the work; Ms. Seabrooke’s mural — the most conservation intensive — still needs $400,000 worth of work.

“It was a struggle for the artists to create them,” said Denise C. Soares, the hospital’s executive director. “And it was our honor to conserve their legacy.”