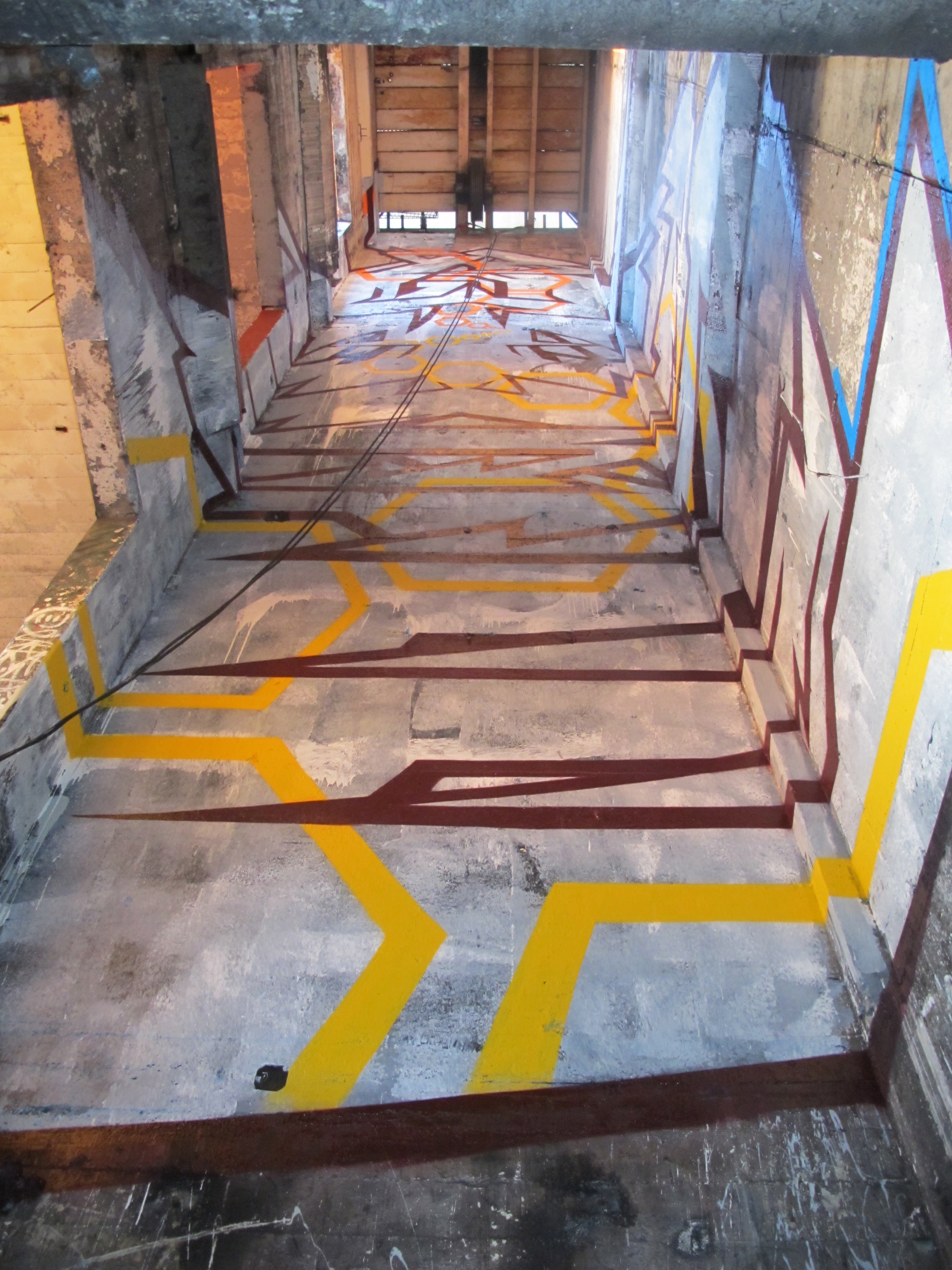 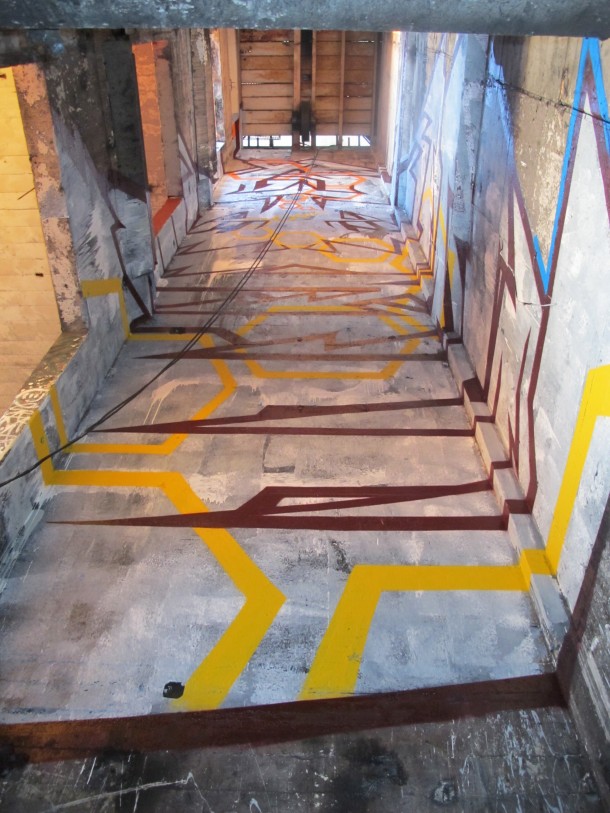 In the world of visual, aerosol-based art, there’s the conventional, and then there’s the amazing.

Recently, Release – a member of Oakland-based mural art collective Community Rejuvenation Project – accomplished the latter, painting a 30-foot tall vertical piece in a warehouse elevator shaft. Inspired by painting two outlines by aerosol legend Phase 2, the artwork upholds tradition and innovation at the same time. This highly unconventional–and possibly unprecedented–feat breaks the mold of typical horizontal art pieces and stands as a testament to Release’s skill, dedication, athleticism, and ability to project mind over matter, not to mention the triumph of spirituality over physical and mental challenges. 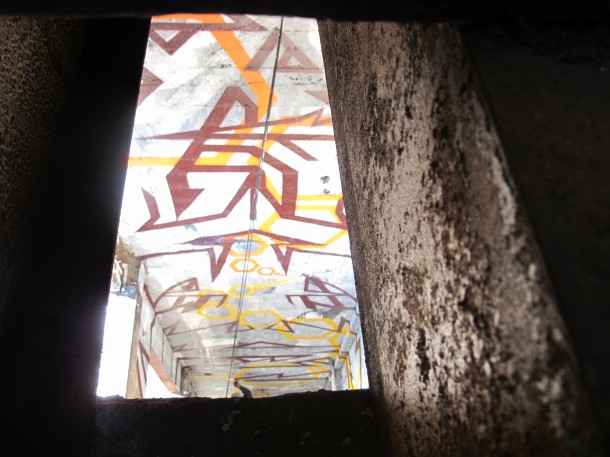 Shoot from the roof of the elevator shaft. Photo by Mike Threesixty.

The story of how the piece came into existence is a fascinating one.
As Release recalls, “I had heard about this warehouse that somebody bought and wanted the entire inside painted but was not too thrilled about a lot of the names being featured in the show. When our brother Irot came into town and said he was painting there, I thought the place might have some hope… After painting all day in Richmond, we went by the space to see what he had been painting and he said that I could probably get down too, cuz there was still a lot of space.
“I wasn’t too interested in painting there until i looked up the elevator shaft and had a vision. I knew I was supposed to do a vertical piece from top to bottom that said ‘RISE.’”

As Release explains, the inspiration for the piece came from a deep place within his soul. “I have been painting and skateboarding in abandoned buildings since I was about 15 and have been aware of the lost souls and spirits of the dead who tend to gravitate towards these places. In my dream state as well as my waking life, I have been guided to these places and encountered many terrifying and yet humbling situations.  As a traveler on the path of release, I feel it is my duty to assist all beings in the practice of non attachment and spiritual elevation/evolution to the best of my ability. I knew that imprinting the prayer ‘RISE’ with the intention of helping these souls (both living and dead) rise into the light and transition to new life was my purpose at that infinite moment.”
Release was focused on manifesting his vision and bringing it to life. So he talked to the guy organizing the space, who offered him a small wall next to Irot. “I told him i wasn’t interested, but I was down to do a burner coming down the elevator shaft that said ‘RISE.’” 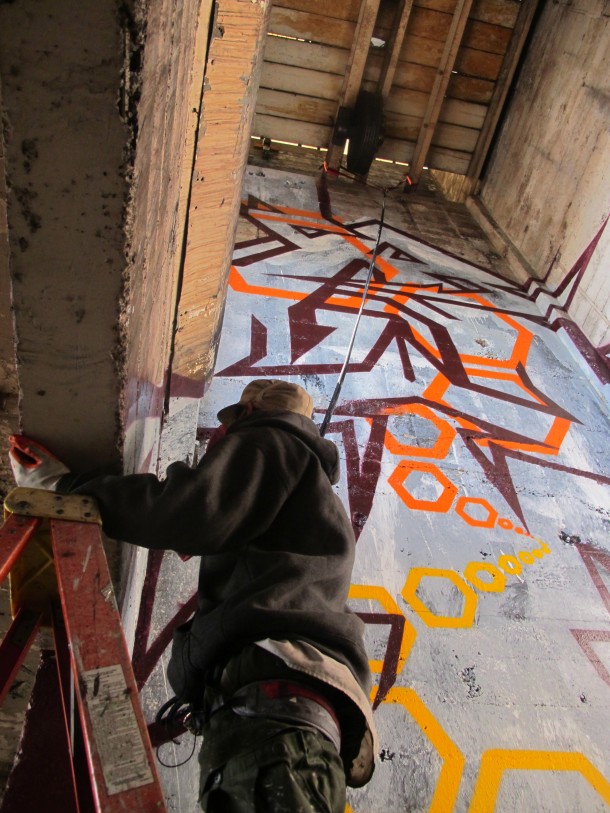 The ladder was placed on a plank that sat on a small metal ledge at the floor level of the shaft. Working on the ladder still required the use of the harness and was precarious at best. Photo by Mike Threesixty.

Upon hearing that, Release says, “his eyes lit up a little glimmer with that what the f*ck, this guy’s crazy look.” The shaft, it was explained, was going to be boarded off.
But Release remained true to his vision, and insisted he could pull off the project, despite the difficulty level and sheer insanity involved. “After seeing the wall once, I already knew exactly what to do, so I explained to him the process of harnessing myself in to the I-beams on the top of the 4th floor, rappelling, and building a platform that would hold me up on each level with a ladder. After a few long pauses, a couple long looks to the 4-inch pool of stagnant piss and water at the bottom of the shaft, and reminding me that i was risking my life for this, he told me I was welcome to do it.”

That Sunday, Release says, “I showed up late with my 15 gallons of paint, 1 extension roller, a ladder, newspaper, and tape because another artist named Ghost Owl had already painted on the first floor of the shaft. An interesting thing about this larger than life sized grey owl character is that where I’m from, in the Southwest, people talk about the owl as a messenger of death and that when you see one to look the other way. However, others in the Pacific Northwest call the owl a sign of good luck and a sign that you are on the right path.” Seeing the already-painted owl, he says, “was an instant reminder of the delicate balance between life death and the places in between which we all experience consciously or not. Respectfully, I masked off the owl so I wouldn’t drip paint on him the following day with my fill in.” 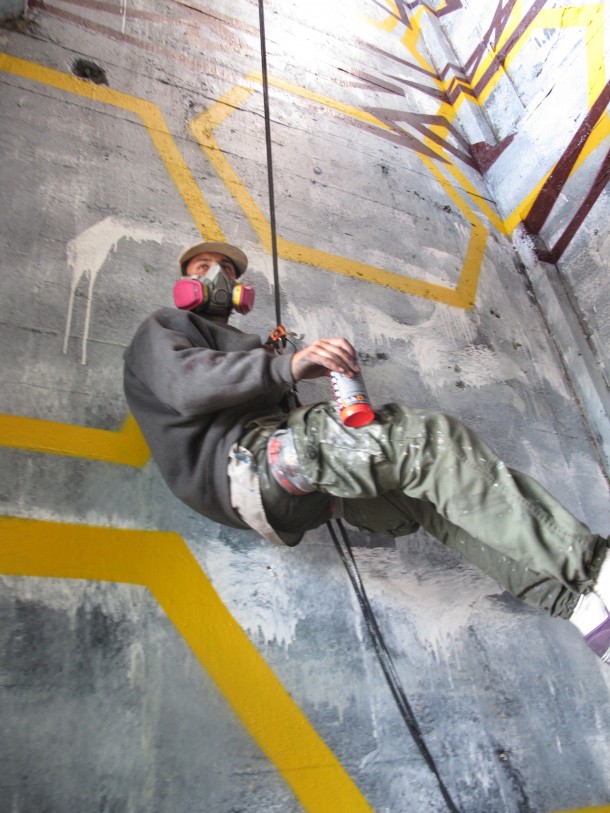 Release rappelled down the three story elevator shaft, occasionally using a ladder placed on a wooden ledge on each floor. Photo by Mike Threesixty.

The next day, Release tested out his knots by rappelling from the top of the 4th floor to the bottom. “Everything was smooth, so I built my platform on the top floor and started to fill in my piece with black white and grey, mixing the paint on the wall to create a layered agate-like marbling effect that reflects the realms of darkness and light, and the balance in between the two found throughout the universe.”
As one might imagine, to complete the piece, Release faced many obstacles, both physical and spiritual. “The biggest challenge I faced during this time was maintaining my own balance,” he explains. There were many times, he says, when his safety was in jeopardy: “I’d be at the top floor on my tip toes, on the last step of the ladder, held up by 2×10 boards resting on the ledges of the shaft, holding onto whatever I could with my left hand and painting with my right, making sure my knots were tied tight enough in case I did fall.”

During the day, light shown through elevator doorways, long since removed. But the final piece didn’t get any light from the curators. Photo by Mike Threesixty.

The experience, he says, required a tremendous amount of faith, brought him closer to God, and reaffirmed his spiritual beliefs. “I imagine certain beings feel the same way: on the edge of existence, afraid to let go of the past and leap into the unknown. I did this piece for them and all the fears that can be overcome with dedication and faith. Knowing in my heart that I could fall at anytime with one slip or poorly tied knot, I maintained my prayer and intention of elevating our existence to a higher plane of union with each other and our creator for the well-being of our planet and the generations to come.
“With gratitude, I painted this piece by the help of our God, my guides, my family and my friends. I exponentially remembered the teachings of being thankful for every moment of this beautiful life we all share and pray that we all may find our roles in truly making this world a brighter place.” 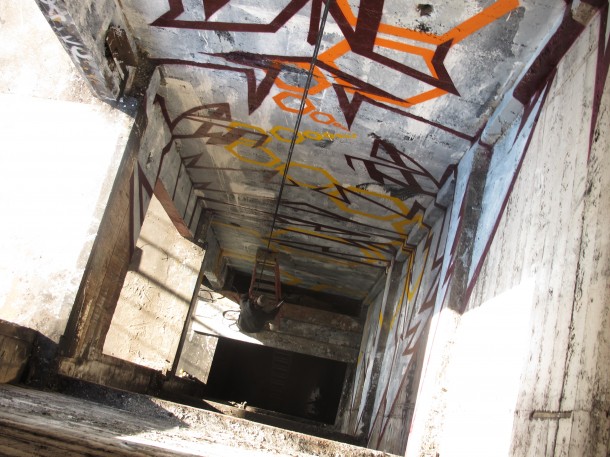 Release painted the top three floors of the elevator shaft. At the bottom of the shaft was a foul pit full of feces and slime fermenting for months. Photo by Mike Threesixty.

Painting the shaft, he says, “was also a good reminder of who is really about the evolution of this writing culture and what it really means to be one, and who’s still doing it just for fame or the wack praises of a hipster colony with a fake idea of (r)evolution spreading the plague of meaningless, no-skill havin’ toys and suckers. (You know who you are.) I hope you find out who you really are and recognize the power you have as an artist on this planet at this time and use it to help others!”
Having completed the piece, Release also attained the next step in his continual evolution, as a messenger who speaks through the art he creates.  “I give thanks to the One God the creator of the Heavens and the Earth, my mother, father, stepfather, my dog Tosh and all my relations, MIKE3SIXTY, DESI, RAVEN, VULCAN, PHASE II, AMUZ, IROT, SKUL,SUBS, MERO, SOLAR, ZEAL, JRIL, DISKOTEKA, PHIL THE VIL, Eric Arnold, and Victoria for all the help support and inspiration on this incredible journey. Thanks so much. PEACE… RELEASE.”