Chicano Park and the Transformative Power of Murals

HomeChicano Park and the Transformative Power of Murals 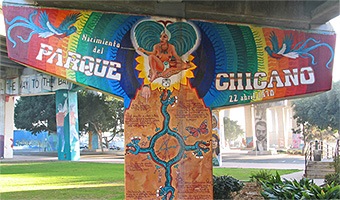 No one travels to see graffiti abatement. No one goes out of their way to see a blank wall. In fact, no one really notices a blank wall. People avoid patchy walls with poor paint outs of graffiti. They make the neighborhood less attractive. Murals are the solution. Chicano Park is proof! 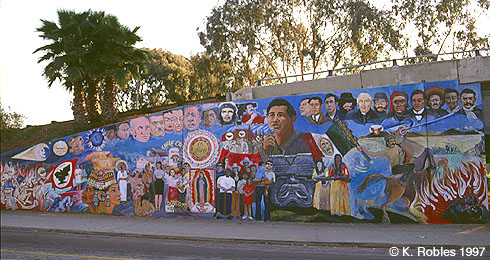 Chicano Park, located near the intersection of Logan Avenue and Cesar E. Chavez Parkway, is more than a typical neighborhood park with a plain grass field and a standard playground. It isn’t a park with the most modern playground and fancy benches. This park is more than a recreational area; it is alive and breathing, inhaling the customs, values and culture of the many people who visit and exhales its art, like tattoos with underlying meanings and bold statements.

The murals covering Chicano Park are more than magnificent— they’re powerful. The location only adds to the gigantic spirit of this small park, sitting protestingly under the pillars of the San Diego – Coronado Bay Bridge and Interstate 5. Like its murals, this park has a lot of history and a powerful story behind it.

Chicano Park was built with difficulty and hard work from the people of the community Barrio Logan. Barrio Logan was and still is a predominantly Mexican-American community. Since the 1930s, the neighborhoods were harmed by abrupt changes. At one point, access to a local beach and pier was destroyed to make room for the U.S. Navy and its industries. In 1963, I-5 cut through the community and in 1969, the feet of the Coronado Bridge stomped on the very core of Barrio Logan. 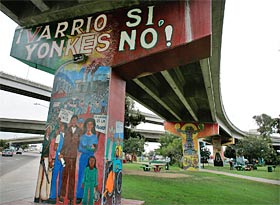 “The struggle for Chicano Park was one of the main struggles during the Chicano movement in San Diego during that time period,” San Diego State Chicana and Chicano studies professor Isidro Ortiz said. “At the time that the struggle occurred, you can say that Barrio Logan was on its way to extinction because of the rezoning and the moving of industry there. The community was lacking many resources, including a park.”

The forced relocation of families brewed anger toward San Diego officials. At first, the community did not know it could stand up against such actions as residents of San Diego. Furthermore, community members decided it was too late for action and settled for the park the city council promised to build in return for the intrusive additions to the city.

But building Chicano Park did not come easy. A park was promised to keep the unrest of the community to a minimum and in reality, a park wasn’t going to be built. The city began preparations to build a California Highway Patrol station instead. Once community members found out, word spread like wildfire. Everyone with a passion to keep the community intact joined the occupation of the patch of land, which belonged to them since the very beginning. Community members made human chains to block off the bulldozers and others planted flowers, trees and cacti.

The occupation lasted 12 days, while city officials and San Diego residents held meetings regarding the park. Almost four years later on April 22, 1970, construction for the park began. It was a great deal of importance because at first the community members believed they didn’t have many rights, but then stood up for themselves.

“I believe the biggest importance of the park is that it stands as a symbol of resistance and perseverance in Barrio Logan,” SDSU student Laura Moreno, who is a member of a community organization in San Diego called Unión del Barrio, said. “Also as a place where murals represent the Chicano struggle, where various Danza Azteca groups practice each night as a community and a park that has become an ultimate representation of struggle and political advancement for all people.”

It was in 1973 when history was written by the people living in the community, beginning with Salvador Torres, an artist who received his master’s degree in painting and drawing at SDSU. During the conflict about the piece of land, Torres began to envision a park that also acted as a canvas for the storytelling of the people in Barrio Logan. In 1969, he founded the Chicano Park Monumental Public Mural Program and received permission from the city to begin the murals.

The library at SDSU actually holds one of Torres’ paintings. It can be found on the first floor of the library addition. On the painting are the words “Viva La Raza.” Torres made this painting through anger and frustration in response to San Diego Gas and Electric. When the company released a series of advertisements degrading Mexican culture. Torres said to Latina/o Art Community: “Subsequently, as I worked on this painting, my ‘coraje y sentimiento’ (anger and feeling) arose and animated ‘La Huelga’ image (‘The Strike’ image of the United Farm Workers) in its transformation into a Phoenix rising. My translation of ‘Viva La Raza!’ is ‘Long Live Humanity!’

Art was essential for expression especially at a time when discrimination was at its peak. Chicano Park is a canvas the Barrio Logan community needed to restore its pride. A famous mural at Chicano Park is called “Varrio Si. Yonkes No!” which was a collaboration between Raul Jose Jacquez, Alvaro Millan, Victor Ochoa and Armando Rodriguez in 1977. This piece expresses frustration about the many Anglo-owned junkyards infesting the community and contaminating people’s homes and yards. Moreno pointed out several other pieces.

“There are several that are important to me,” Moreno said. “One is the ‘Chicano Takeover’ mural where it depicts from the bottom up the history of Chicano Park. The other mural is a smaller one across the street by the handball courts that began to name all the victims of operation gatekeeper, the physical border reinforced in the ‘90s and since then, thousands of people have lost their lives crossing.”

History seeps from the very walls of Chicano Park.

“It is a very important symbol of a community being able to wage a successful struggle, to make the principle of self-determination a reality and also to influence and provide the space that it needed and wanted,” Ortiz said.

Even passing by in your car, you’ll feel the extraordinary power of the murals. The park is a like a book and will continue to teach future generations of Barrio Logan and anyone who visits. The park is continuously used for important Mexican holidays such as “El Grito” and the yearly celebration of Chicano Park Day. It is used as a place of congregation for the sake of unity and for the preservation of a beautiful culture.