Pilsen and the Art in Public Spaces Initiative

HomePilsen and the Art in Public Spaces Initiative 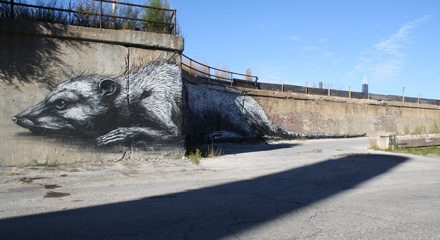 CRP has been taking a close look at Danny Solis’ initiative, Art in Public Spaces. This program has all the makings of a good idea. It is an an antivandalism initiative that’s intended to control and limit defacement of public property. It points out the former Mayor, Richard J. Daley, spent millions of dollars on costly and ineffective Graffiti Blasters. However, CRP has two concerns. First, it appears, according to this article, that Solis has only spent $13,000, which brings up questions about if the artists are being adequately paid. Second, what is being done to maintain the historic Mexican murals? Its appears that ll of Solis’ funds are going to new works, while the old murals, which were supposed to be stored as part of the Pilsen Quality of Life plan, still haven’t gotten any love. We hope to see more artwork, including the restoration of the old murals, before we call this plan a complete success.

Pilsen is known for its beautiful murals, but look closely and you might see some of the 1960s paint chipping off of cement walls. Alderman Danny Solis, who’s represented the 25th Ward since 1996, noticed the deterioration as well as the unsactioned graffiti in the hood and decided it needed fixing up, even if it would cost him money out of his own pocket.

Solis’s $13,000 launched a program called Art in Public Spaces, an antivandalism initiative that’s intended to control and limit defacement of public property. The program also pairs artists from all over the country with local artists to restore existing works and produce new ones, said Solis advisor Lauren Pacheco, who came up with the project. The artists work with homeowners and small-business owners whose properties have been defaced by graffiti to cover it with new art. Twenty-five murals have been completed since the start of the program in April. Pacheco says the alderman plans to designate some aldermanic menu funds and TIF money for the program.

Mayor Daley spent millions on costly and ineffective graffiti blasters, but 20-year Pilsen resident and former Pros Arts street art instructor Adriana Fraga said the Art in Public Space program will be different. “I think people will respect it—all the time and effort you see people put into it, they’re not gonna want to mess that up.”

Solis is sponsoring a trolley to showcase the progress of the Pilsen murals on October 20-21 as part of Chicago Artists Month.