HomeCRP Teams with People’s Grocery for MLK Day of Service 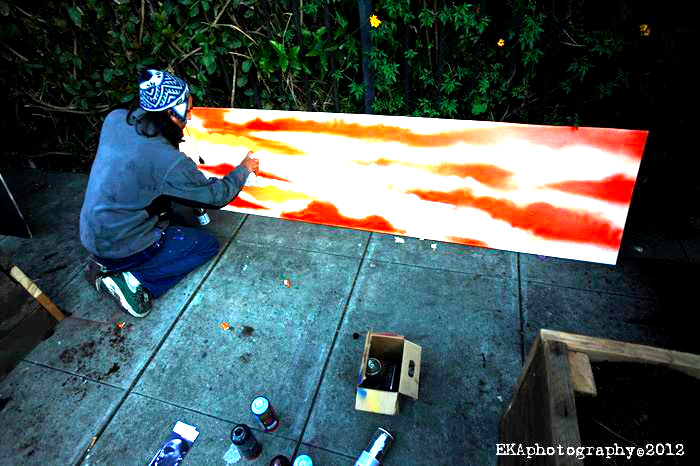 As part of an ongoing partnership between People’s Grocery and the Community Rejuvenation Project, CRP artists Mike Threesixty and Desi W.O.M.E were commissioned to create four new portraits at the People’s Garden at California Hotel, as part of their MLK Day of Service. Before starting the project, CRP asked the People’s Grocery who they would like to see painted; the answers were civil rights and social justice heroes Dr. King, Mother Wright, Harriet Tubman, and Huey Newton. So we painted these icons in one afternoon, on MLK Day. Each portrait was accompanied by a quote from the honored leader painted on the street side of a planter’s box placed in front of each piece. The planters’ boxes were color-coordinated with the portraits, each with a different combination of hues.

As CRP founder Desi W.O.M.E. said, “It was a real honor to be asked to do this project. Paying tribute to the ideals of Dr. King and the other inspirational legends and also building community in a very real way. People from the neighborhood instantly recognized Mother Wright, and engaged us in dialogue about the history of the Black Panthers and things like that. It was a good feeling, to know that we could engage the local residents like that.”

The portrait project was part of the garden’s expansion onto the sidewalk, which also included the installation of four planter boxes, seating, and permanent chess boards for the community to gather around. The goal of the project is to increase local participation in the area and reduce the blight at 35th St. and Chestnut, which has been a frequent target for dumping and littering. As CRP were painting, People’s Grocery staff and volunteers unloaded truckloads of soil into the planter boxes. With both groups endeavoring in their labors at the same time, the sense of solidarity became evident.

CRP’s paintings were so well-received that they have already been commissioned by People’s Grocery for another two portraits. The project will proceed down Chestnut until the end of the block and continue down the street in the future. We are super excited to be a part of the ongoing transformation of West Oakland and to work with community organizations like People’s Grocery.