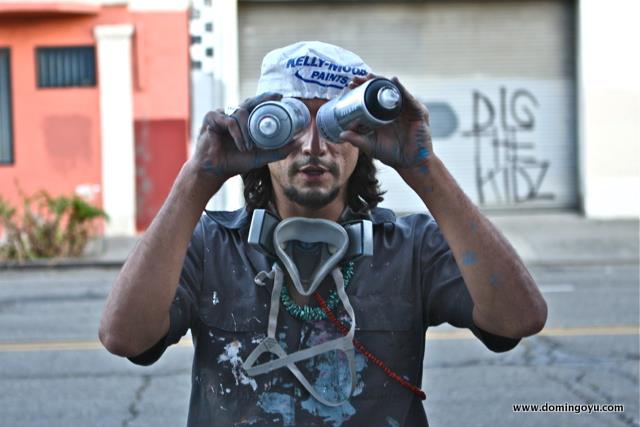 In solidarity with the Oakland General Strike and the Liberate Oakland Movement, the Community Rejuvenation Project is proud to present our latest mural, “Sprouted Prayers: Underground Resistance.” The project reflects the prayers of our ancestors manifesting in our placement in the struggle today. At the core of the mural is Underground Resistance, encouraging 99% struggling for economic and social justice to remain firm in their commitment. African and Indigenous elders and Taiwanese freedom fighters stand with the Black Panthers and Harriet Tubman endorsing and supporting the emerging generation of youth carrying the movement forward. Calendar images from the Mexica Sun Stone that mark relevant dates are interspersed with the butterflies also representing the ancestors. The youngest warrior on the wall is Selah, the latest addition to the W.O.M.E massive, who was born while the mural was being painted. Beats 737 added his name to the wall.

The vision for the new piece grew out of a dialogue initiated by Daniel Zarazua, a CRP photographer and regular collaborator, who wanted to see connections made to his hometown of Detroit and his motherland, Taiwan. Underground Resistance also has direct connection to the techno innovators with the same name. The collective of DJs and musicians carry a parallel revolutionary message and avant-guard approach to music. His research also led to the inclusion of the indigenous Taiwanese freedom fighters who resisted Japanese imperialism in the 1930s.

The mural features the work of guest artist and master aerosol writer, Lavie Raven (feature post on Raven coming soon). Raven has visited the collective regularly and flew in over the weekend to participate in a series of murals as CRP restores and redoes its works on the Martin Luther King Cultural Corridor. The project was the historic first meeting and collaboration between Raven and fellow master practitioner Mike 360. Rounding out the artists were Beats 737, Muse, Abakus, Pancho Pescador and Desi W.O.M.E. Photographer and Communications Director, Eric Arnold even contributed, painting kemetic symbols for the primarily African American community where the mural resides.

Located at 28th and Martin Luther King Way, the latest mural was created as part of the CRP’s mural restoration and maintenance program. When murals fade or are significantly vandalized, the collective returns to restore or repaint the works. The previous mural, “Four Elements,” had received some minor mosquito bites from the local fan club and faded significantly prior to its replacement with the latest works.