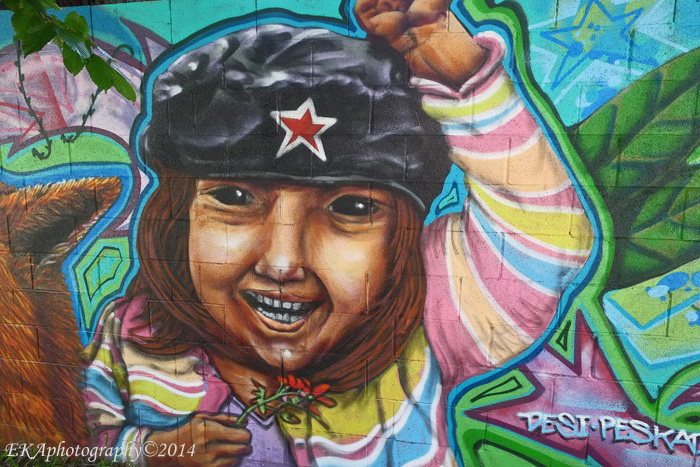 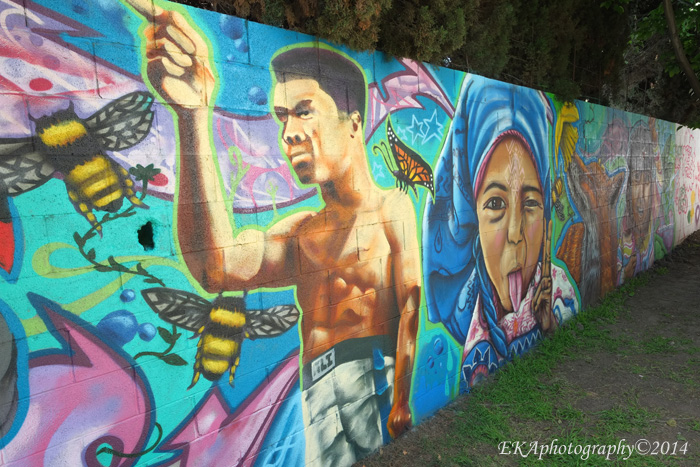 Every mural tells a story. That’s a truism for every single mural painted by the Community Rejuvenation Project. Visual art is a form of storytelling in and of itself; murals offer a way to weave stories together into a visual narrative through the use of vibrant imagery which carries both symbolic and literal meaning.

Often, there’s an even deeper story behind the murals CRP does. In the case of the Biblioteca Popular / People’s Library, the location of a recent CRP production by Desi Mundo, Pancho Peskador, and guest artist Irot, the place itself holds a remarkable history. 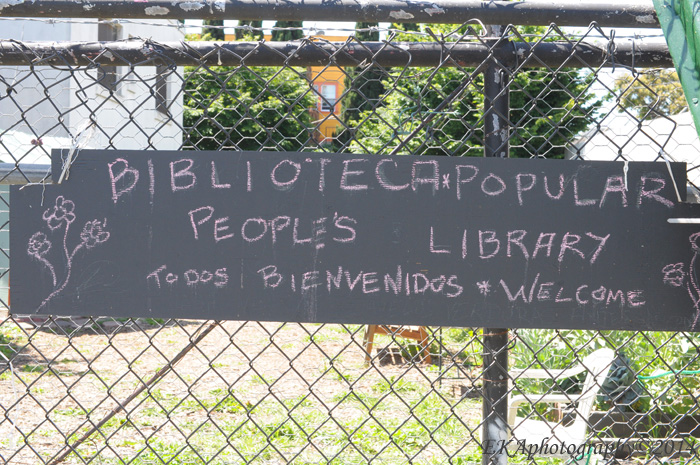 The story of the People’s Library is a story about a community landmark in Oakland’s San Antonio district, which had fallen into disuse and abandonment, becoming a blight magnet. During the Occupy movement in 2012, activists briefly reclaimed the building, then were displaced by police within 24 hours. Undaunted, they soon returned to the building grounds, and planted a garden, built planter boxes, and established a free library – transforming a neighborhood eyesore into a community resource, where longtime neighborhood residents, many of them Spanish-speaking, could be fed and educated. For almost two years now, the People’s Library has been going strong. It’s a symbol of how a underserved, low-income and largely ethnic community facing gentrification and displacement empowered themselves through cultivation of an unused place.

The CRP mural, which depicts Muhammad Ali, ladybugs, butterflies, revolutionary children, and indigenous people, was the icing on the cake. It sits next to a wall painted by children and people who were inspired, yet lacked the same level of artistic talent as experienced muralists. Today, the two halves form one long art wall which helps to beautify the community and protect the grounds from further defilement and tag vandals. 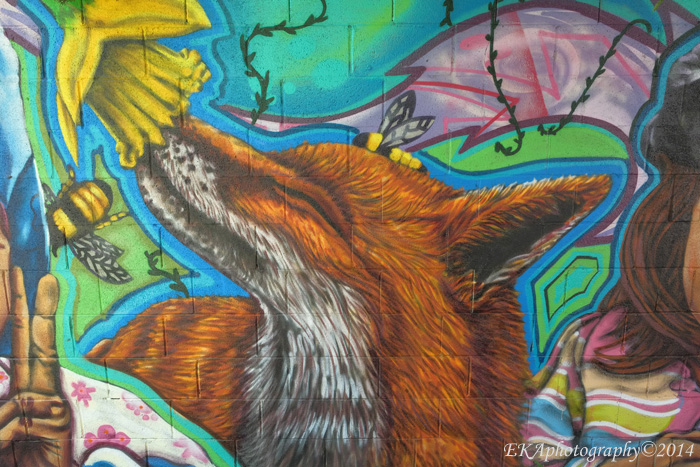 After documenting the mural and the location with photographs, CRP spoke with Omar, one of the activists involved in the liberation of the space, as he was delivering a bunch of free food, for neighborhood residents.

“From the beginning, we wanted to have some beautiful art here, as a representation of what people can do once they take control of a space,” he said. “We wanted to reflect [that] this space can have a lot of different things. We opened up the wall when we were still looking for someone to do a mural, we just decided to open it up to the kids.” 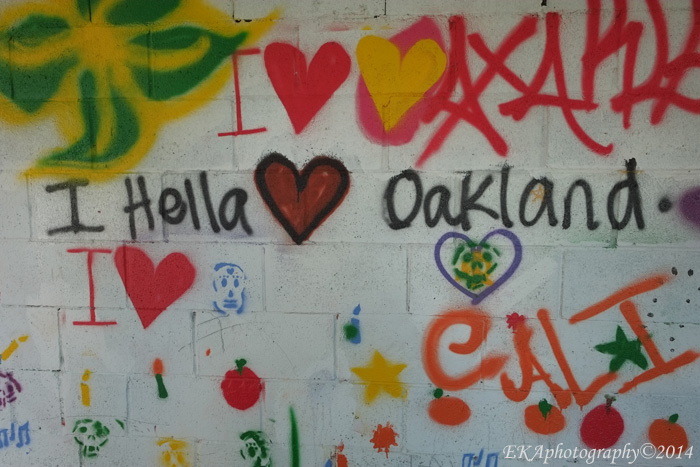 After CRP finished its mural, Omar added, “When I see people’s faces when they see it, it’s this feeling like, ‘wow.  We matter.’ Or, ‘we can be involved in changing the dynamic in this community by doing this. And other people will be attracted to that space, and also do good things. And that our efforts to do good things will kind of multiply by us doing them.” 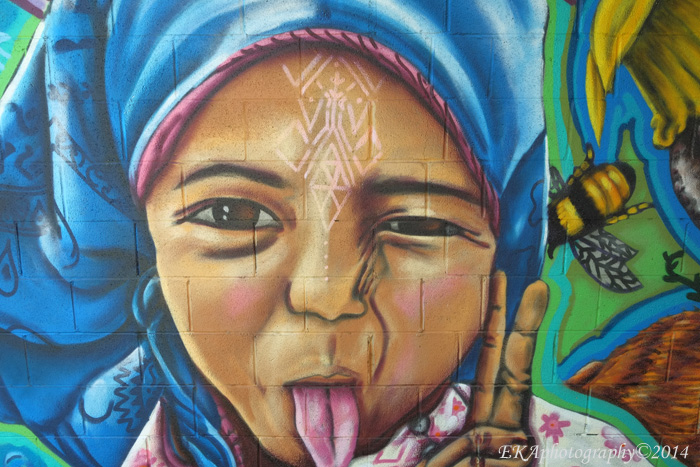 Omar also filled in much of the backstory behind the People’s Library.

“It used to be a library for about 60 years, then it was a progressive school run by Chicano activists for people who dropped out and were having other problems in this neighborhood,” he explained. “So a lot of people in this neighborhood remember this building fondly for a couple different reasons, like 70 years of consistent community engagement.

“And then, the city didn’t want to do some improvements, which were very cheap at the time, and they closed it down in the late ‘80s, and so it’s been closed for almost 20 years.”

As with many abandoned buildings, there was a sense that nobody cared about the space. Illegal dumping and unsightly, unartistic tagging became commonplace, and the space began to negatively impact the neighborhood’s psychological well-being.

“Before we got here, [it] was a real junkyard,” Omar said. “People came from all around the city and dumped their trash here, maybe people even in the community got used to treating it that way. It was very ugly, and once of the things we’ve heard from people all over the neighborhood was, what an oppressing thing it was to walk by… We wanted to open it up as a library, to show the potential of taking over these spaces the city has forgot in poor neighborhoods. And once we did that, people from the community came over there and joined us. It was a community-driven project, with the activists sort of transitioning into the community.” 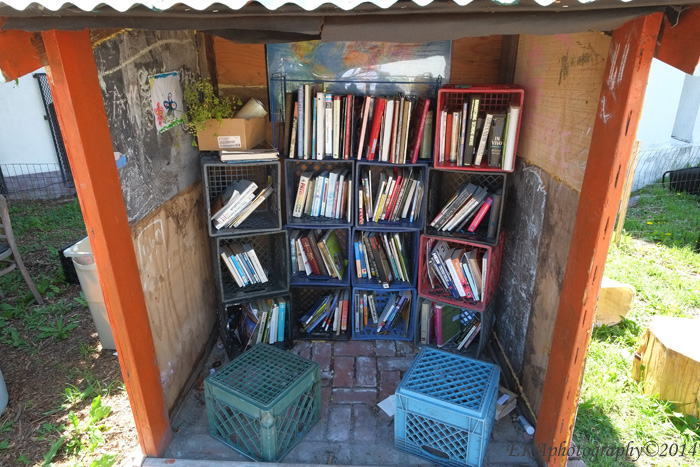 After reclaiming the space, Omar said, “We got kicked out by like 100 cops later that day, but we came back. At first we were around the building, we had like 1000 books donated during that day. We had to do something with the books.”

During the occupation, a garden had been started on the grounds, which inspired the activists to keep it going.