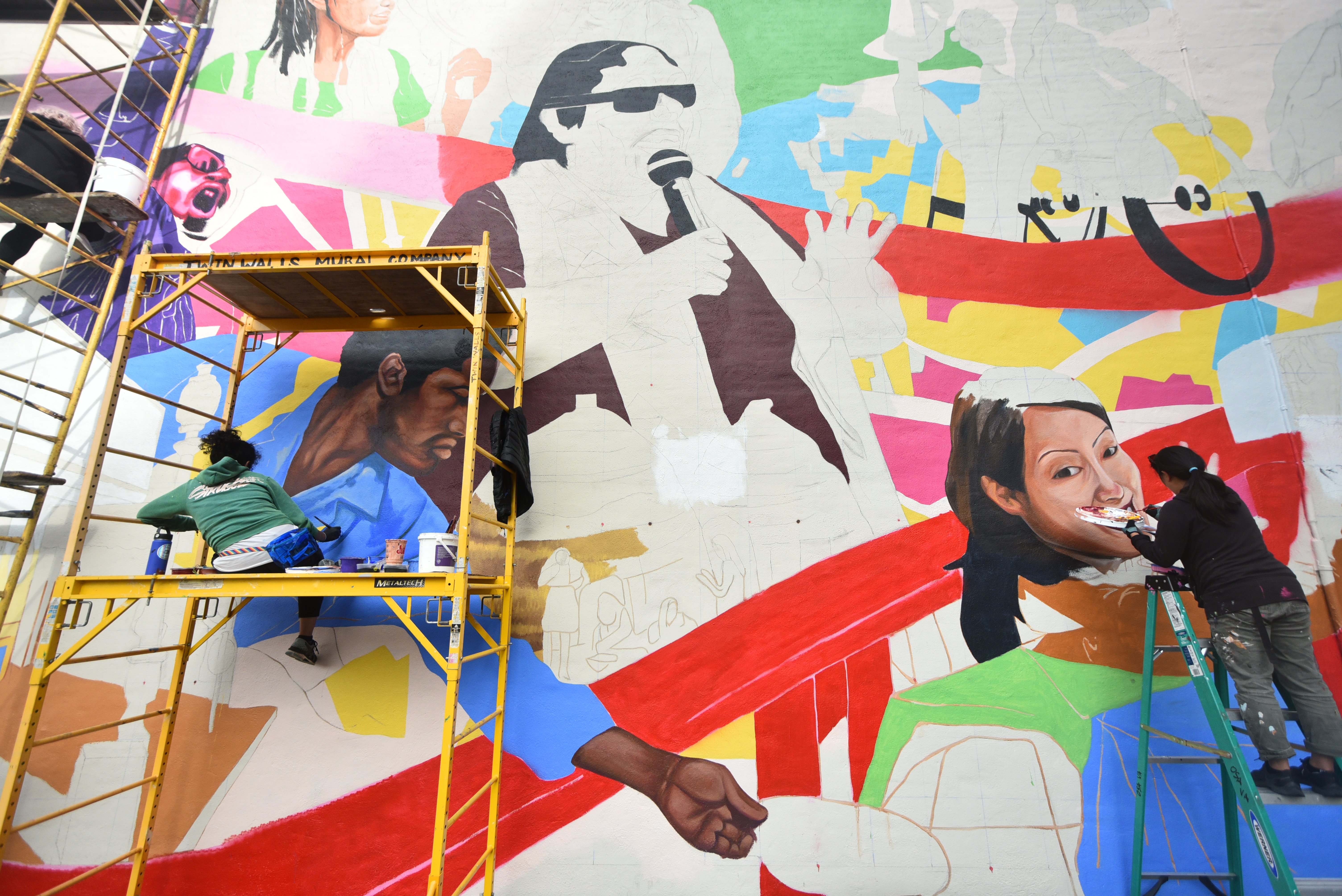 The “AscenDance” mural has finally kicked into gear. After several weeks of build-up, the project — located on the side of The Greenlining Institute’s headquarters, at 360 14th St. in downtown Oakland — has moved from gridding to sketching to outlining to images being colored and starting to come alive.

The past two weeks have represented a giant step forward for the eight-story mural, which is beginning to take on a character as the faces of its subjects are given tone and detail.

Coincidentally, that same time period has also been a national flashpoint in the outcry and continuing protests over the murder of George Floyd, which has galvanized the Black Lives Matter cause amid ongoing calls for police reform. In the wake of sustained protests which left a trail of broken windows, vandalized and/or looted properties, rubber bullets, and spent tear gas cartridges followed by boarded-up windows across the 14th St. and Broadway corridors, visual artists descended en mass to the area to paint a serious of murals — turning the district into a de facto outdoor art gallery which has garnered local and even national attention.

“AscenDance” muralists Marina Wong-Perez and Elaine Chu, along with Trust Your Struggle collective member Ce Ce Carpio, were named as being among “five female artists creating protest art” by Elle magazine, while local media from KQED to the SF Chronicle to the East Bay Times all published articles on the street art explosion. CRP alumnus Pancho Pescador also got some media attention, for a portrait he did on the side of Luka’s Taproom. Other local artists like David Burke and Keena Romano joined in the festivities, alongside Trust Your Struggle’s Bounce and numerous other local artists of varying ability. Piecers and taggers have also added to the collection of fresh paint downtown.

The mural site is just one block from 14th and Broadway, ground central for so many of Oakland’s protests and rallies, and just adjacent to the front entrance to the Greenlining building, where a coalition of local organizations teamed up for a rally in support of Black Lives Matter and Black and Brown solidarity. This event featured speakers and live performances; legendary percussionist/singer Sheila E. and legendary activist Angela Davis were reportedly among those in attendance. The CRP muralists painted through the entire event, showing their dedication to their craft and focus.

All this energy being generated will inevitably become part of the mural’s lore; the vibe of the streets has already carried over to the project. Which seems fitting, given the vision behind the mural, and its themes of resilience and resistance. The mural specifically evokes liberation struggles and community-led pushes for equity which date back to the 1960s and the Civil Rights era, and have continued ever since. Whether fighting for police reform, against displacement, for recognition of indigenous and immigrant rights, or for the right to play cultural drums in a rapidly-gentrifying area, Oakland has been the Town that don’t play around.

The “Ascendance” mural was already born out of the struggle for equal rights and justice, but it has been re-christened with a figurative exclamation point in the wake of recent events. With every day, more color and details are added, and the mural’s collective personality comes into sharper focus.