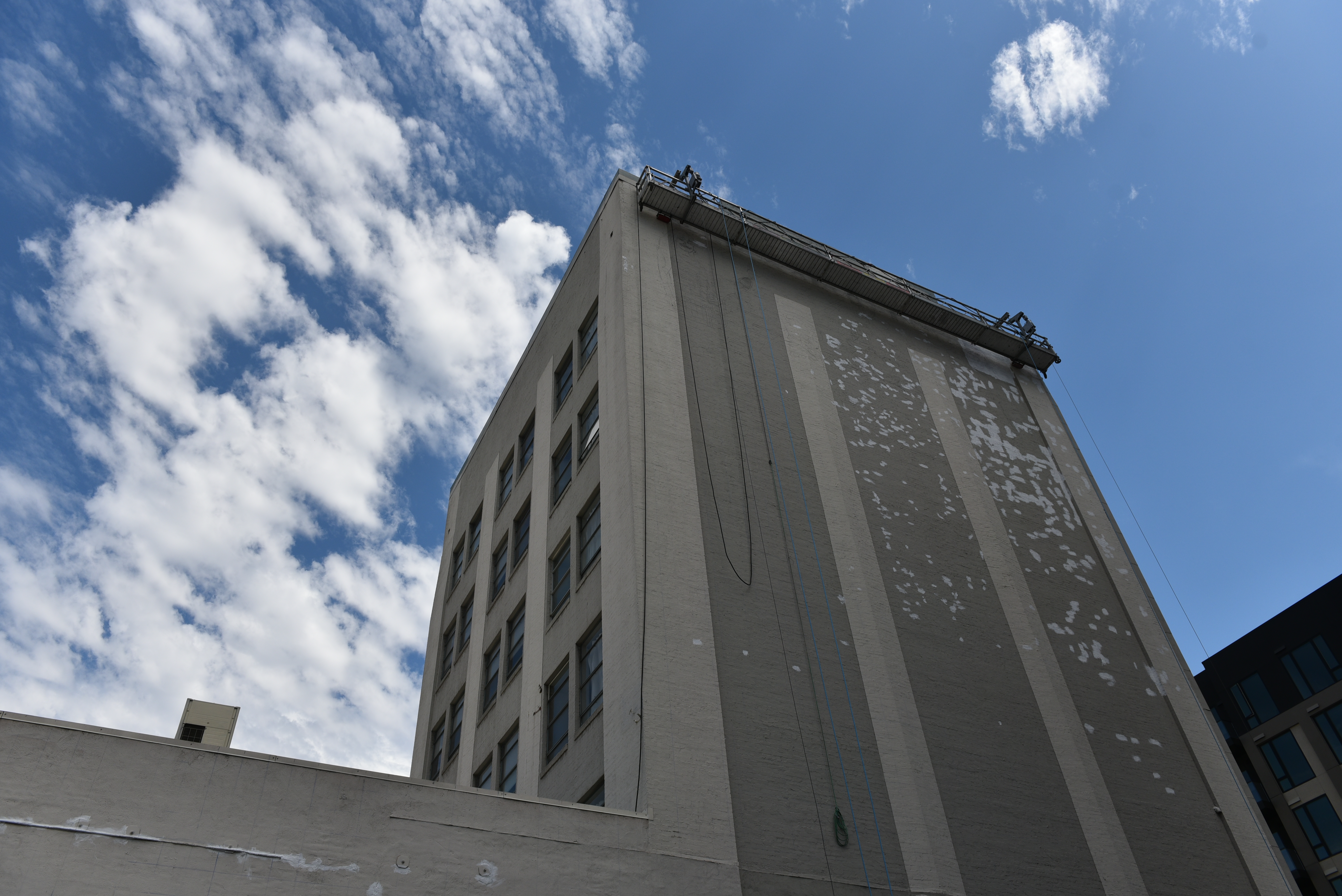 CRP’s newest mural, at The Greenlining Institute’s downtown Oakland building, looks like it’s going to be a powerful work of public art. On Friday, May 29, the artists had just completed a day which saw the first sketch outlines hit the wall. That night, what started as a peaceful protest in honor of George Lloyd became a violent and chaotic scene. The morning light revealed scores of vandalized storefronts, dozens of scrawled tags, and broken glass everywhere. It was a wild night. Yet the mural was unscathed — a good omen.

This week, the mural — now called “AscenDance” as inspired by the push for equity and the presence of dancers from many different cultural traditions — will take further shape. Images will appear where there was only blank wall beforehand. But before we get ahead of ourselves, we thought it would be insightful to document the process to-date.

About two weeks ago, the prep work started on the wall. The first step was plastering the holes, to make the surface smoother. This took some time, as it’s a big wall, and was accomplished through a swingstage and a tall scaffold.

Once the wall was plastered, the gridding began: gridlines of 1’ x 1’ squares were placed across the entire wall, approximately 5600 of these squares in total. This took several days and was done with the hello of several people, in addition to Lead artist Desi Mundo: Assistant artists Marina Perez-Wong and Elaine Chu of twin Walls Mural Company, longtime CRP associate Abakus, volunteers Meg Duff, Annelise Finney, Vivian Ponte-Fritz and Alejandro Velez, who helped with site preparation .

Once the gridding was finished, pencil sketches were outlined on the wall, and then further outlined with fresh paint. Muralist Ce Ce Carpio and Assistant Artist Rachel Wolfe joined the crew for this part of the process. The vibe turned from methodical and laborious to vibrant and joyous, as Wolfe brought her portable Bluetooth speaker and started cranking out jams by Stevie Wonder, Digital Underground, and others.

There’s still quite a long ways to go, and over the next weeks, this blog will feature regular updates on the mural’s progress. In the meantime, enjoy these photos of the AscenDance crew at work!