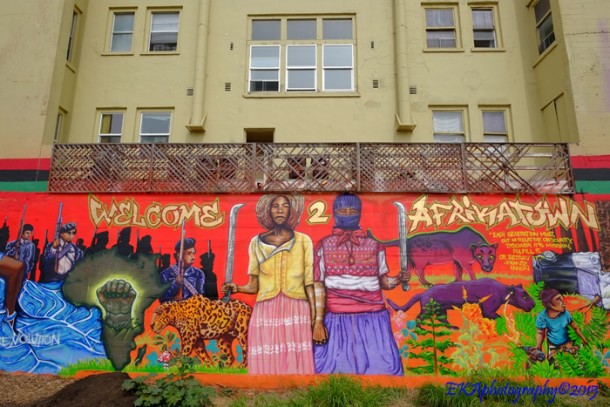 The Community Rejuvenation Project (CRP) was blessed and fortunate to have been involved with the creation of a new  mural, “Welcome to Afrikatown,” painted in solidarity with community organizing space Qilombo, community advocacy group the Black Angels, non-profit organization Planting Justice, and educator Denae Martinez, who teaches at San Francisco State, Laney College, Merritt College and Fremont High School.

The mural came about after CRP was suggested for the project by Planting Justice, a frequent collaborator. For CRP founder and Executive Director Desi Mundo, the project made sense for several reasons: in addition to continuing a history of food justice-related collaborations (including People’s Grocery and Phat Beets), the mural lends visual impact to Qilombo’s mission. As Mundo explains, “Qilombo is working on the frontlines with populations that are being displaced through gentrification and reasserting the Afrocentric presence and consciousness that helped define Oakland’s identity… As allies, we are honored to support this intention with our art.”

The mural faces a controversial plot of land which has been the center of an ongoing fight over gentrification. Qilombo, headquartered next door, built a community garden there, which not only provides free sustenance in a food desert neighborhood, but also engages local residents in eco-sustainability practices – as well as a steady dose of dead prez and other conscious rappers, and the occasional chess game.  But Qilombo staff and community members say they have been threatened by a developer who wants to raze the garden  – hence the need for a mural specifically dedicated to fighting gentrification.

“The main gardening days were extremely powerful to witness and participate in,” Mundo says, adding that more than 60 people painted on the wall throughout the day. He adds, “From the artists’ perspective, it was crucial because there was so much space to cover. Folks took ownership of their contribution to the project and a lot of good work got done. We really needed those hands painting because this project would have taken a long time without so many people helping out.” 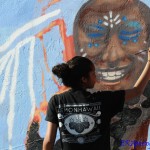 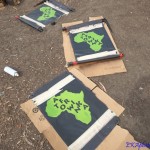 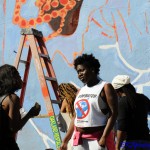 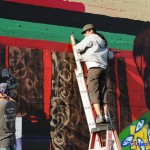 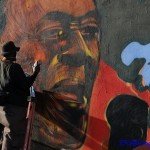 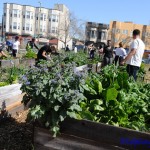 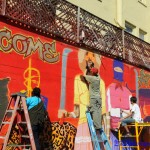 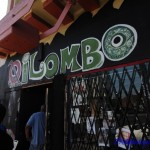 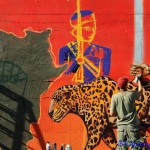 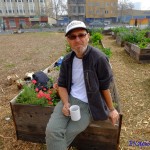 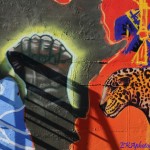 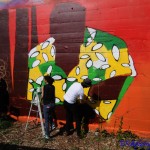 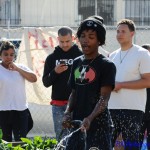 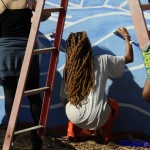 The imagery for the mural was developed through a series of community engagement meetings CRP held with Qilombo prior to the mural’s inception. The mural’s left wall is graced by a portrait of Kwame Nkrumah, the osageyfo (redeemer) of Ghana and a strong proponent of Pan-Africanism. An outline of North and South America is connected to a swirly, oceanic depiction of orisha Yemeja, whose fluid “arms” connect the African continent with its Diasporic relations. In the center of the mural, Zapatista Commandante Ramona and an indigenous African woman, symbolizing black and brown unity, are depicted sporting colorful clothing and holding machetes—a symbol of agricultural production as well as indigenous resistance. The women stand under a banner proclaiming “Welcome 2 Afrikatown.”  Two panthers and a jaguar guard the women. Over visual aspects include an indigenous resistance fighter, a tree growing out of a police car, the Black Panthers, and Nobel Prize winner Wangari Maathai, a champion of environmental accountability and sustainability.

Remarkably completed in just a mere four days, the finished mural exceeds all expectations and has already become a source of neighborhood pride. According to Mundo, “The mural has really transformed the space from a wall that disenfranchised local residents and put forth a message that connects to the negative aspects of our society into a space that is proud and welcoming. The mural reflects the revolutionary nature of Oakland and has become a rallying point for folks that are drawn to radical social change. The garden meets people’s most basic needs for food and community. I see the Black Angels, Qilombo, and Planting Justice as really following in the footsteps of the Black Panthers. They are feeding the community regularly and doing that frontline organizing. Its a inspiring movement and I hope that it spreads.” 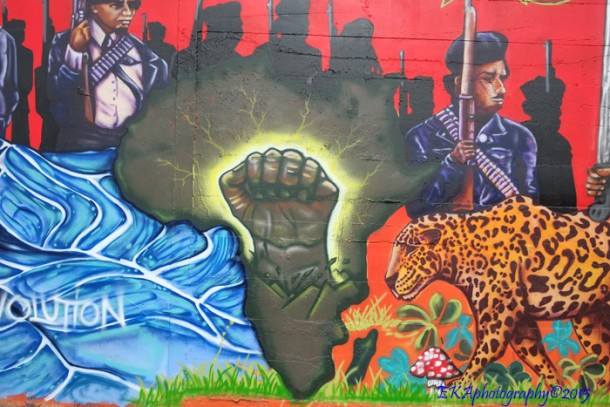