A native of Chile, Pancho Peskador grew up under the repressive military dictatorship of Augusto Pinochet, who came to power when Peskador was a young child. “All my childhood and my adolescence was under a military boot,” he says.

“Growing up with stories of people being disappeared, being tortured, being incarcerated, being exiled, repression, those times in Chile were very grey. I remember in Chile, there were like, two murals in the whole of Santiago. And no musicians would go to Chile, as a protest against the regime, so I grew up in this very grey landscape. Even though I had a happy childhood, and by luck, [no one in] my closest family was tortured or exiled.  My neighbors, classmates, teachers… I saw it all around me. I saw the burning tires, the barricades in the streets, the tear gas…” That experience is reflected in Peskador’s affinity for political subject matter. 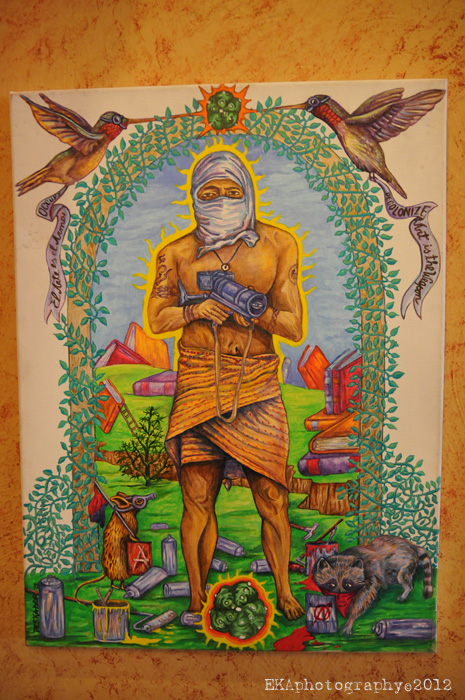 Blessed with innate native ability, Peskador started drawing as a young child. As he recalls, “I started painting since I can remember. I have the first memory in kindergarten.  The first day, they let us draw, and the teacher praised my mom about how good my drawing was. And for some reason, that got stuck in my mind.  I always remembered that, as a vivid memory.”  He continued to do art throughout grade school, elementary school and high school, filling up notebooks with his drawing and later progressing to characters. But his parents weren’t too keen on the idea of him being a professional artist, and never encouraged him to pursue art as a career. After graduating from high school, Peskador studied journalism in college, but decided that way was not for him. Eventually, he found work as a printmaker in Santiago, and worked at that craft for many years. 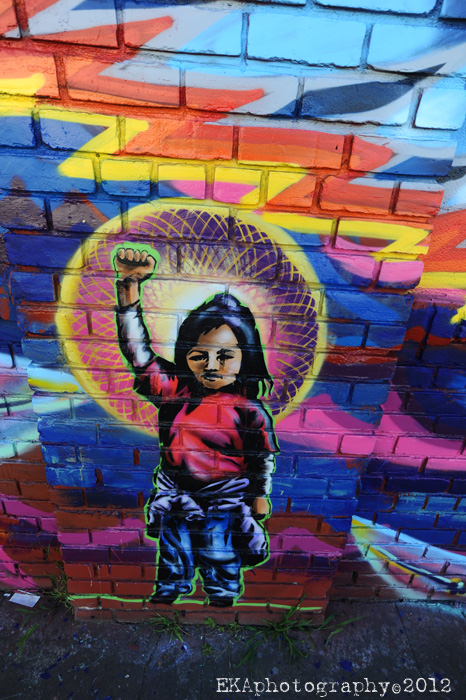 In 1995, he came to the US and worked a variety of jobs. All the while, he continued to paint as a hobby, but never exhibited his work. “When I got here, I kept painting, even though I had to get jobs I’d never done before that consumed most of my time,” he explains.  “I’ve been constantly making art through all my life, even though I have a lot of in the closet periods where I was doing a lot of work but not really showing.”

In 2010, Peskador chanced upon CRP’s artists painting a mural in Oakland. “So one day I was just driving around, man, I saw these guys painting. I stopped by right away, and pretty much introduced myself and [said], ‘hey, I’m an artist, you know,’ then everybody gives me that look like, ‘where did this guy come from?’” 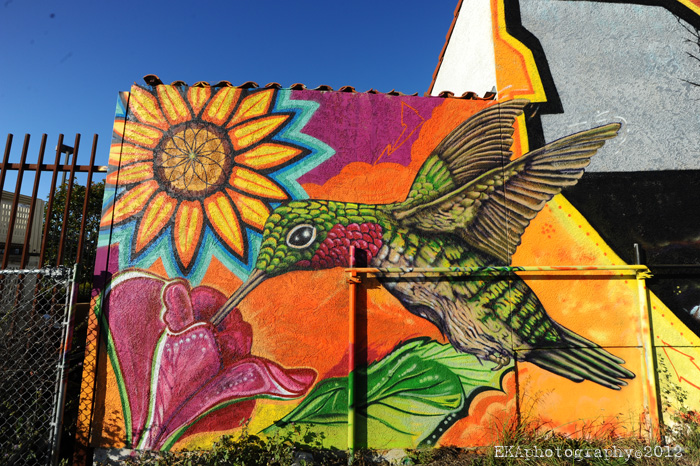 After that, Peskador says, “pretty much, like every time that they paint, I’d show up and try to help in whatever I could, filling in.” Despite not knowing much about aerosol art, he embraced CRP’s spraycan aesthetic and became a regular contributor, beginning with stencils and working his way up to characters and abstract designs.  “I started doing all those simple tasks, and little by little start learning it,” he says. “The more I learned it, the more CRP started including me in the work. To the point where I started feeling really comfortable with the spray paint. And not only with that, but painting outside, in the street, open-air interaction with the people. After I felt that, it was hard to go back to the studio. I finally had what I was lacking for so long. That community aspect, that collective aspect, but also that interaction with people. Not needing to do a show to hear feedback about your work.  So that’s how I started working with CRP.” 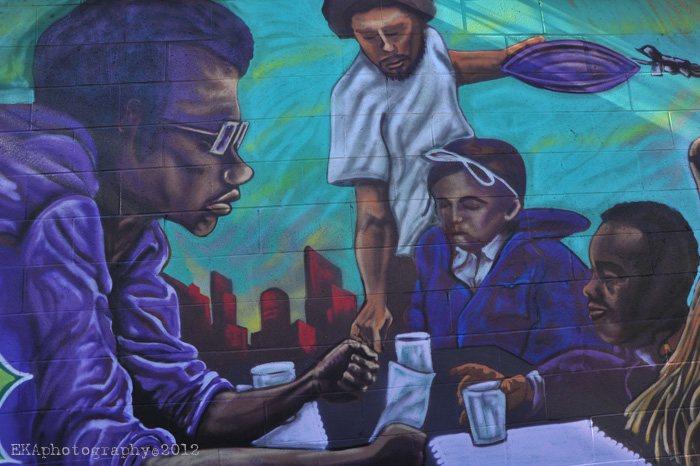 After cutting his teeth on walls in Deep East Oakland and the Fruitvale District, Peskador became a valued member of the CRP collective. He bonded with CRP artists Desi, Mike 360 and Release during the People’s Grocery project, a massive undertaking which took two months to complete. After that, he contributed to a flurry of work—8 murals in six weeks—which solidified his position as a muralist. 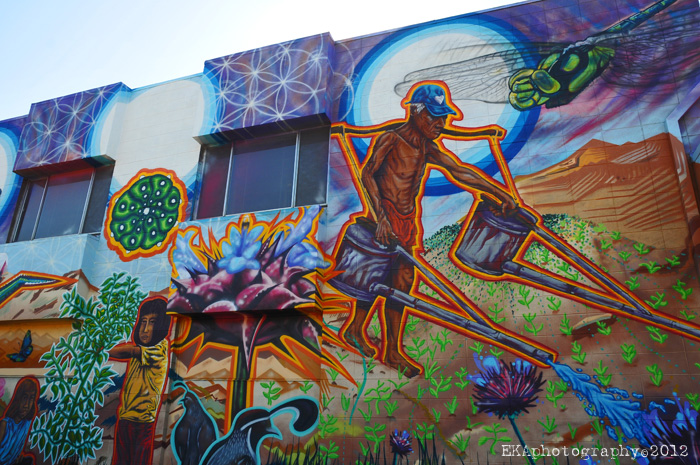 “People’s Grocery was pretty amazing,” he says. “We really start feeling like a real team and working very well together. After painting those walls, we really started feeling together… Also, [the] ‘Peace and Dignity’ wall, that’s where I paint[ed] my first character. You can tell my evolution from that character to now.  It’s just getting better.”

In addition to his evolving work with CRP—he’s become one of the collective’s lead artists—Peskador added to his street art experience with a gargantuan undertaking  for SF-based non-profit organization 67 Suenos, a 100’ x 30’ wall in downtown SF which focused on immigrant rights and featured the slogan, “No Human Being Is Illegal.” 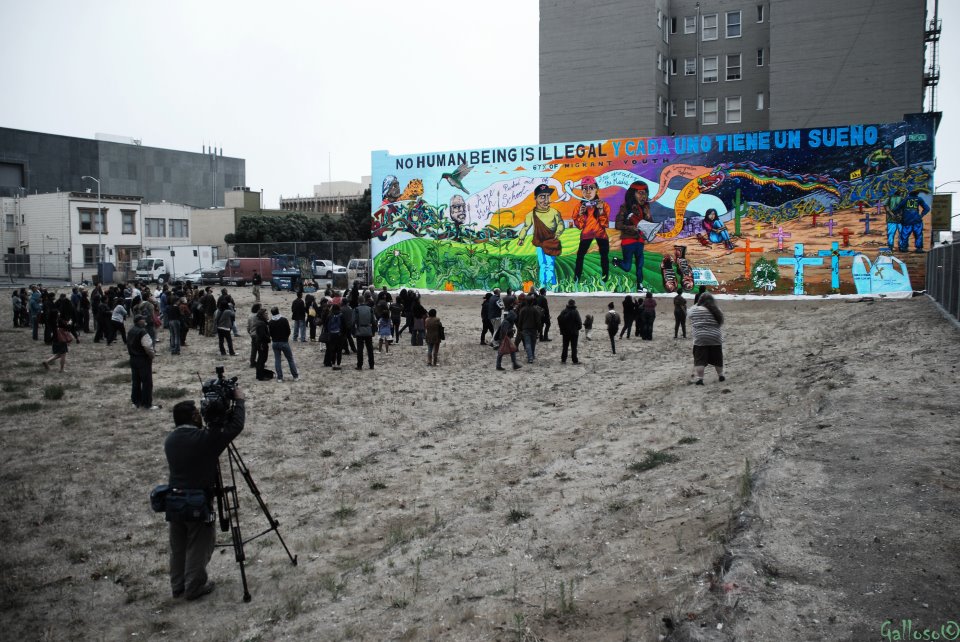 “That project definitely made me grow,” he explains.  “And now, after that wall, I feel like, no wall is too big. I’m capable to paint a whole building, if I have the opportunity.”

Besides painting, Peskador has also cultivated a passion for photography. He’s been slowly accumulating a collection of documentary-style street photographs, mostly taken in his adopted home of Oakland, which focus on what he calls “hardcore subjects”: art, social injustice, poverty, and homelessness. These subjects resonate with Peskador as seen through the lens of an immigrant, who grew up believing in false images of America as a land of extreme wealth and prosperity propagated through television and Hollywood movies. 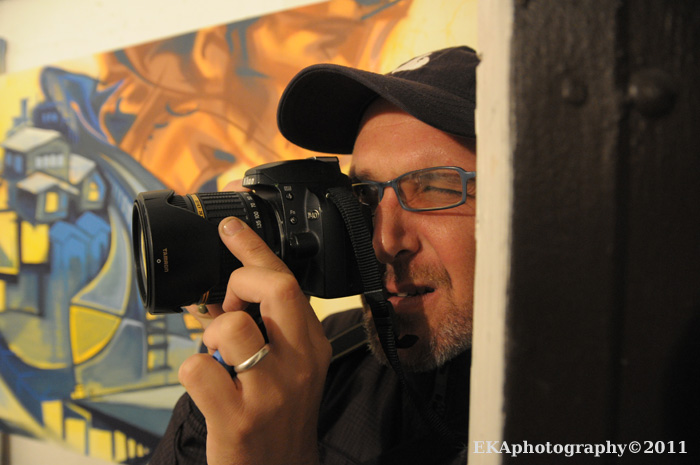 “In Chile, you have the idealization of the United States as a rich country, as a country there is no poverty, there is no homeless, there is no misery,” he says. “Before coming here, I have that way of thinking, until I come here and start seeing a total different reality. And I want to portray that.”

A deep spirituality serves as balance for Peskador’s politically-influenced work. “The spiritual side is always my search,” he says.  “My search for my own truth. Realizing and being interested in different religions, different cultural and spiritual paths. Searching within myself, I guess, trying to figure out the huge questions that make us all human.”