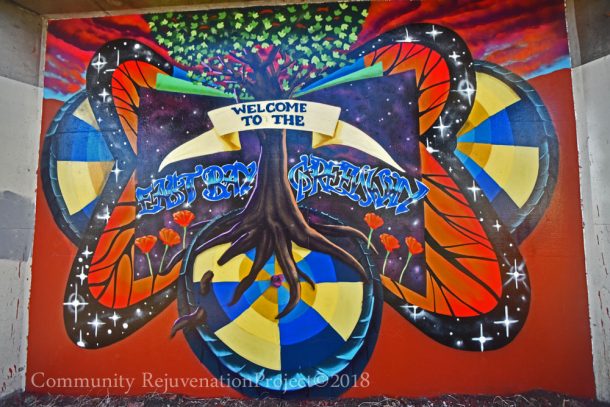 “Welcome To The Greenway”

What do public art, BART, and Scraper Bikes all have in common? They are all connected in a new mural painted by CRP’s Desi Mundo. The mural, located on BART-owned property at 75th Avenue and International in Oakland, also connects two ongoing regional initiatives: BART’s Arts Master Plan  and the East Bay Greenway.

The mural consists of two sections on either side of the street. Mundo says the design was the result of a community-driven process which included several public meetings with East Oakland residents. “The first mural, ‘Welcome to the East Bay Greenway,’ is about connecting the elements of east Oakland to the natural world and through that the universe. You have an oak tree at the center that’s roots are growing through the wheel of a scraper bike. The tree becomes the spine of a book, with three pages showing, the colors of the sky, the earth and the cosmos. The tree also becomes the head and abdomen of a monarch butterfly and inside the black margins of the wing, we see the stars. Outside the wings, we see more bike tires, adding to the symmetry of the piece and returning it to where it began.” 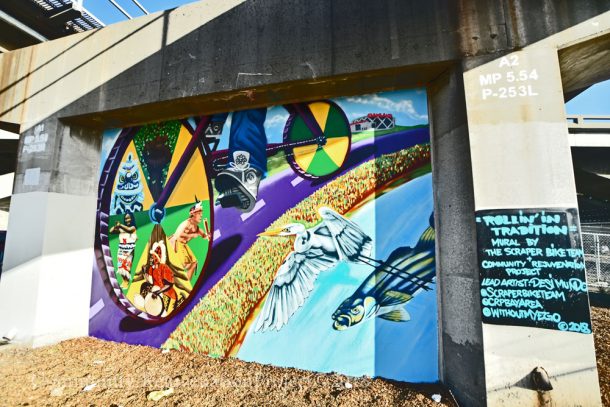 “The second piece, ‘Rollin’ In Tradition,’ connects the cultures of Oakland through biking. Inside the color wheel of scraper bike, we have traditional Ohlone, African, Asian, and Polynesian cultures uniting in solidarity, as a rider passes through east Oakland along the traditional wetlands and water. I included an egret and a striped bass which are local to the region.”

The mural is particularly noteworthy because, up until now, it has been far more common to hear about vandalism associated with BART property, not commissioned art projects. However, says BART’s Jennifer Easton, “BART has included artwork in stations throughout the system since its earliest days. Local, national and international artists were hired to enhance station environments for BART riders. As BART has evolved over its 45+ years, the value and needs for art have evolved; the relationships with the communities adjacent to the BART stations and infrastructure are valued more than ever before. Currently BART is developing guidelines for community art engagements and the project with Scraper Bikes and CRP is a great example of a community-driven project.”

Easton added, “This is a terrific gateway for East Oakland – it’s exactly the [place] where I got my first glimpse of Scraper Bikes many years ago, and it conveys so much. A wonderful element to the evolving East Bay Greenway” — a 16-mile bicycle and walking trail which runs from the Lake Merritt to the South Hayward stations. First proposed in 2008, the Greenway’s first sections were built around the Coliseum station in 2015, at a cost of $10 million. Other sections are planned, but will likely depend on availability of funding. Eventually, though, the Greenway will result in enhanced connectivity for cyclists who also use BART, reducing greenhouse gasses in the process. Additionally, utilizing murals is a good idea, as among their many benefits are increased public safety and resonance with both community residents and visitors.

“As BART has evolved over its 45+ years, the value and needs for art have evolved; the relationships with the communities adjacent to the BART stations and infrastructure are valued more than ever before.” –Jennifer Easton, BART

In a statement, Mundo noted, “These locations are highly visible and accessible to the public. We’re honored to have been selected for this work. That also makes public artwork an important asset to the locations and not just an optional decoration. So we want to thank BART for the opportunity and, at the same time, ask them to open the entrance to projects like these wider.” He adds that the mural went through a community-driven engagement process which included several public meetings with East Oakland residents.

The mural project came about , says Original Scraper Bike Team founder, Tyrone “Baybe Champ” Stevenson, when “The folks over at Bike East Bay reached out to us, they said there was an opportunity to do a BART project. We got a $5000 grant from Rails To Trails to select any trail that we wanted to beautify. We chose the East Bay Greenway Trail. We chose that trail because it’s Deep East Oakland, where the Scraper Bikes started, and it’s right there along the Coliseum BART station.”

He adds, “We’re doing an unveiling of the mural which is on 75th and International… it’s gonna start Thursday the 26th at 10am. We’re celebrating. This is a one of a kind art piece. We’re gonna have BART Director Robert Raburn there, the artist Desi Mundo, and we’re inviting City Council and hopefully, the Mayor can attend as well. And definitely folks from Rails to Trails.”

“Having public art in East Oakland is important because it shows the vibrancy of the city. It shows the creativity and the true colors of the people that live there.” — Tyrone “Baybe Champ” Stevenson, founder of Original Scraper Bike Team

Speaking of Rails To Trails—a national conservancy group whose Western Regional office is in downtown Oakland–Western Region Director Laura Cohen says, “We’re big fans of the Scraper Bike Team and support art on trails, because it really helps reflect the  community and make each trail an individual experience. I think it’s important to incorporate that in the experience.”

The mural project, she adds, “is a really good example of a great organization partnering with a dynamic local artist to enhance the community and BART infrastructure. This mural is a gateway to the neighborhood, and encourages use of the Greenway by bicycles and pedestrians to access the Coliseum station by providing a point of interest – specifically the hyper-local Scraper Bikes.”