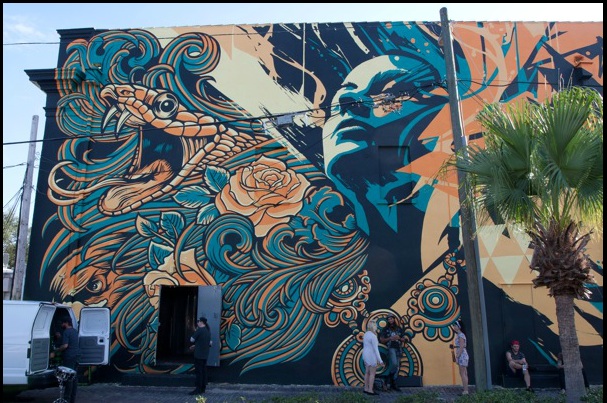 This article is an interesting combination of both the beauty and difficulty found in the mural movement, not just in St. Petersburg but throughout the US and the world. On one hand, murals are becoming more accepted and acknowledged as benefiting the community and aerosol writers are being recognized as for their contributions to neighborhood beautification. On the other hand, aspiring muralists are working for cheap or free to create their works and their personal contribution of time and labor is not valued. We see these challenges everyday, when people contact CRP for murals but are only willing to pay for supplies. Or better yet, are willing to donate their wall for a mural. Artists are continually being asked to provide EVERYTHING and get nothing back for it.

What’s even more difficult about the case of St. Petersburg are the limitations placed on artists by the city.  “Murals are allowed on private property if they comply with city sign code, aren’t perceived as offensive and don’t have words other than the artist’s signature.” There is an inherent prejudice against aerosol writing culture, whose art is based on words and letters. A hardcore stylist’s work is unlikely to be readable but anything legible is banned. So in addition to creating works for peanuts, our work isn’t allowed to be on the wall. It doesn’t look like CRP will be going to St. Petersburg anytime soon.

Every day about 7:30 a.m., Rasta Geary Taylor pulls into the back alley behind his shop, 1 of 1 Customs. Every day he wonders if it will be splattered or tagged or covered.

But every day, there it sits. Horton the elephant holding a pink flower, grinning Grinches sprayed in a candy-colored mural reaching to the roof.

It was more than two years ago that Taylor commissioned the mural with help from Jared “Thirst” Hernandez and a graffiti artist who goes by Tech. They didn’t ask anyone, not even the landlord of his space in the 600 block of Central Avenue. If they kept it positive, bright and attractive, they hoped no one would complain.

No one has. In fact, the opposite happened. Impressive murals have blossomed in downtown St. Petersburg, filling storefronts, side walls and bleak back alleys, brightening cobblestone paths pocked with dust and Dumpsters.

There’s mammoth eye candy from the Vitale Brothers, Tes One and Pale Horse on the back of the State Theatre, an ornate teal-and-orange image projected on the wall and painted to help visiting bands spot the back door from the road. There are old murals turned new again, like vintage advertisements unearthed on the side of Central Coffee Shoppe, patched, brought up to code and restored by John and Paul Vitale. They’re planning their next mural for new bar The Bends.

The artists work for free or a small fee. They spend a few hundred dollars on paint and when they run out, the mural sometimes stalls. They’re getting help from the Central Arts District, a collection of downtown artists and business owners focused on Fourth to Eighth streets. The group has raised about $2,200 to help pay for and promote murals, among other causes.

“They started to pop up all around the city,” said Wayne Atherholt, interim executive director of the Morean Arts Center, which has its own mural. “We’re one part of trying to improve our neighborhood.”

Murals have appeared in other parts of the city, too, including the warehouses south of the 2000 block of Central. There’s a massive painting by Acud-AKuT and Center One on glass artist Duncan McClellan’s 24th Street South studio. McClellan is opening a new workshop next door in the next month or so. He’ll hold a contest to choose a muralist to paint that building, he said. The prize will be paint and supplies so the artist will break even.

Murals are allowed on private property if they comply with city sign code, aren’t perceived as offensive and don’t have words other than the artist’s signature, said Elizabeth Brincklow, the city’s arts and international relations manager. Nothing can come down just because it’s not someone else’s taste. The artists don’t have to go through a submission process, but they can offer a sketch as a courtesy.

“The city has been really cool,” said Taylor. “I really have to give them props. Let’s start competing with some of these other cities.”

“There are thousands of outdoor murals in Philadelphia,” said Atherholt. “It’s really become quite a tourist attraction and it just makes sense to do, particularly in this area. We have a number of buildings and walls and St. Pete is an arts destination. Probably the best in Florida.”

It is a departure from the renegade tagging that has dotted the city to different degrees through the years. In 1995, there were more than 2,200 reported cases of illegal graffiti. It dropped after the city instituted a removal program, then rose again, then sank.

There seems to be an unspoken level of respect for the murals, which taggers have mostly left alone. The tree mural at Studio@620 is pristine, but the parking signs in front of it are tagged in black marker.

Why? Well, some mural artists are graffiti artists, pointed out John Vitale. They’re already in the community, and by working legitimately with a shop owner, they’re building status in the art world they might not otherwise get.

“If you really want to get noticed,” he said, “find a building and get permission.”