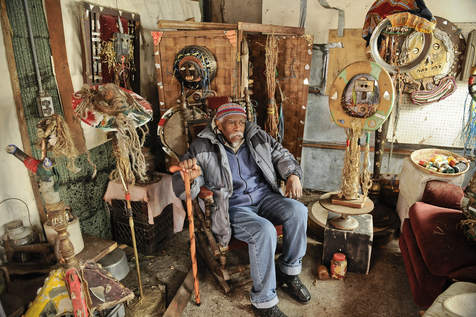 Howard Mallory was an early pioneer in the modern public art movement in Chicago and an important player in the Black mural movement that happened on the south and west sides. He participated in the painting of the Wall of Respect on 43rd and Langley, a pivotal piece in Chicago’s public art scene. He was also well known for his sculptures, masks, pots and ceramics.

Back when “Power to the people” and “Right on” were part of a new lexicon that made the “squares” uncomfortable, the art of Howard Mallory communicated a sentiment he declared with absolute conviction: “I’m black, and I’m proud.”

Mr. Mallory, a longtime Gresham resident who died Oct. 12, exhibited his sculpture and ceramics with the influential Chicago-born artists’ collective known as AfriCOBRA, or the African Commune of Bad Relevant Artists.

By “bad,” of course, they meant the opposite.

That Mr. Mallory did this while also holding down a job in shipping with International Harvester made him stand out, said David Lusenhop, owner of Lusenhop Fine Art in Detroit.

“He would carry these six-feet-high big staffs he carved, these walking sticks, and, with his milky eyes, he looked like the ghost of an African king,” said Lusenhop.

Mr. Mallory died of prostate cancer while in hospice care at Holy Cross Hospital, according to his wife, Lessie Mallory. He was 82.

Lusenhop owns a stoneware piece by Mr. Mallory titled “We Must Go Home With Something to Build a Nation.”

“It reflects his belief African-Americans need to be able to support themselves,” Lusenhop said. “He talked about going to Africa. He said, ‘We must go home with scientists, educators, teachers.’ He believed in the empowerment of his community.”

Mr. Mallory went to Tilden Technical High School, then studied at the Illinois Institute of Technology and the School of the Art Institute, his wife said.

His parents, focused on security, “really wanted him to be an electrician, like his father,” she said.

But art “was a passion for him,” Lessie Mallory said. “He’d do it at night; in the evenings, when he’d come home from work.”

He painted in his coach house, and he built a backyard kiln to fire his ceramics.

The kiln “was huge; it was like an igloo,” said his daughter, Merchelle Reese.

Black pride and nationalism and the civil rights movement gave birth to the Black Arts Movement in the 1960s. AfriCOBRA began in 1968, when its members pledged to develop art that reflected the African-American diaspora and experience.

“The thing that attracted me to the group more than anything else was that they were dedicated to delivering a message to the African-American people that was positive,” Mr. Mallory told a reporter for a Chicago Sun-Times story in 2010.

AfriCOBRA was “about producing work that reflected black folk; that reflected the beauty of black folk in a way that had not been recognized before but that still had a very strong message of uplift,” Tracy L. Vaughn, the 2009-2010 director of Northwestern University’s Center for the Study of African American History, said in a video about an AfriCOBRA exhibit she curated for the school.

“Howard did not go on to teach in higher education, like the majority of his colleagues in AfriCOBRA,” Lusenhop said. “He remained on the South Side of Chicago his entire life. He believed in the community and its future.”

Mr. Mallory exhibited his masks, pots and sculptures with AfriCOBRA in the early 1970s at the Studio Museum in Harlem, Howard University and the University of Massachusetts Amherst.

He sold his work at galleries and exhibited at art fairs, including the 55th Street Art Gallery, the South Side Community Art Center and the McKinley Park Library, his wife said. He did commissioned sculptures for the Cornerstone Presbyterian Church and the Emerald Avenue Presbyterian Church. He also taught ceramics to children at the Parkway Community Center.

Mr. Mallory loved what he called “real jazz,” the kind performed by Cannonball Adderley, John Coltrane, Miles Davis and Charlie Parker, according to his wife. He also liked to take his family camping all over the Midwest in his trusty red station wagon.

He is also survived by another daughter, Jarnette Dill; a son, Katara Mallory, and two grandsons. A memorial is planned for 11 a.m. Saturday at Seventh Presbyterian Church, 8623 S. Sangamon.