Abatement Alternatives: Why Oakland Needs a Mural Program (Part One)

HomeAbatement Alternatives: Why Oakland Needs a Mural Program (Part One) 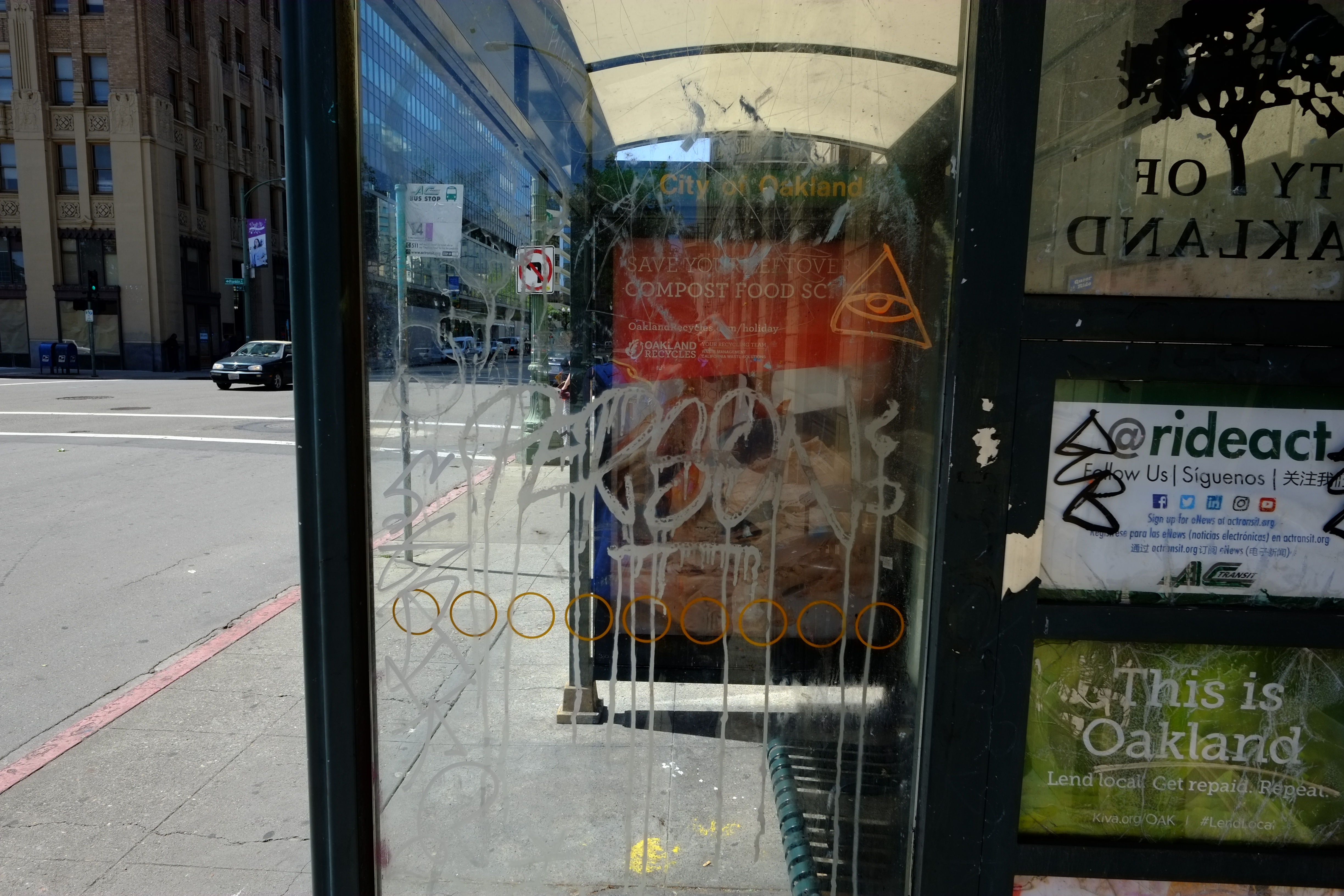 Perhaps the highest level of praise a mural organization could receive is from a city abatement worker, who by his own estimation has been covering up graffiti for “eight hours a day, five days a week” for 28 years. 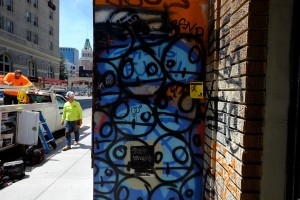 Painting this wall blank would only create a fresh canvas in a high-traffic area like 14th St. (Eric Arnold/CRP)

Indeed, during the Community Rejuvenation Project’s recent Alice Street Symposium , an abatement worker known as Erase, revealed that he’s been “promoting murals” for eight years. Erase spoke highly of murals in general, and singled out CRP for praise: “I’ve been watching you all over town. and murals are those things that speak and say so much and there’s no audio. it’s a visual experience and hits my soul every time I see it… I really appreciate the work you are doing here.”

Perhaps most surprisingly, however, Erase made a plea for city officials to “join the bandwagon, get tuned in to this,” noting that murals have the ability “to connect a lot of people.” But it was what he said next which may have raised eyebrows — calling into question the cost-effectiveness of a job he’s had for three decades. “Now I think the city of Oakland is starting to realize, ‘oh maybe this is cheaper than having eight of us’ (city abatement workers). We spend over a million dollars covering up graffiti. And the city of Oakland needs to tune into whats happening.” 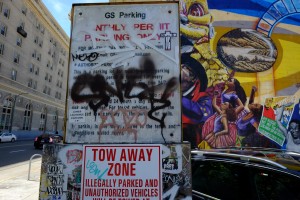 Juxtaposition: a tagged-up sign sits next to an untouched mural on 14th St. (Eric Arnold/CRP)

Erase’s comments resulted in applause from the audience, but they are also worthy of further examination.

Interestingly, an Oakland city budget survey conducted in January found that 26% of respondents favored “some cuts” to graffiti removal services and 9% favored “large cuts” – the combined score of 35% makes this the lowest budget priority out of any category (except for retaining sports teams).

The survey respondents may be onto something. In 2015, KQED reported  that abatement costs had risen more than 50 percent between 2012 and 2014. Despite the increased cost, there’s no evidence of increased effectiveness; it’s basically a money pit. 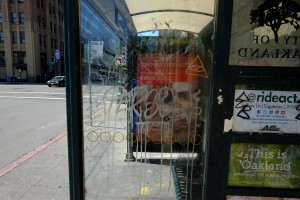 This bombed-out bus stop on 14th St is basically impossible to abate permanently. Would a mural here make a difference? (Eric Arnold/CRP)

In 2014, Public Works staffer Kristine Shaff told the Mercury News, “There’s no amount of money we can throw at (the problem). We don’t know how to stop it.”

An anti-graffiti ordinance passed in 2012 was supposed to deter vandals with increased fines and the threat of civil lawsuits. But not a single case had been brought as of 2015, despite more than 6,000 graffiti complaints recorded that year through the Public Works call center and the city’s SeeClickFix website. 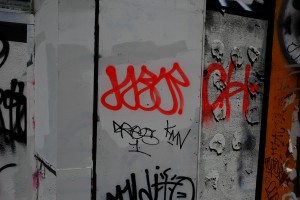 Despite being abated regularly, this wall remains a tag magnet. (Eric Arnold/CRP)

Part of the reason graffiti removal isn’t effective as a long-term solution is that painting over tagged walls essentially gives taggers a fresh, clean surface to vandalize. As a result, the same spots end up being buffed out again. And again. And again. It’s an endless cycle which doesn’t produce long-term results without significantly increased expenditures.

Public officials have long advocated for strong anti-graffiti laws, but have failed to make a tangible dent in the situation. Some have even called for zero tolerance–a nice soundbite, but something which just isn’t possible to achieve, especially in Oakland, where OPD enforcement is practically non-existent. 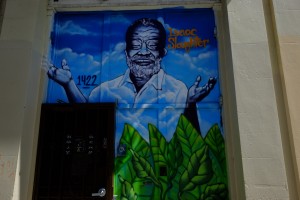 This untouched mural on Webster St. is surrounded by proliferate tags. (Eric Arnold/CRP)

But hardline stances can backfire in some cases, as the mayor of Sao Paulo, Brazil, recently discovered. As Vice reported, mayor Joao Doria openly declared war on street art, holding a press conferences where he himself buffed out a vibrant wall prized by the community. Paulistas, it turns out, take their street art seriously; the loss of a 53km-long, curated, wall which had attracted international recognition was a personal affront to many. Not only did the mayor’s war result in a fusillade of rapid aerosol responses, but “during São Paulo’s Carnival, many Paulistas dressed as blank walls and sang songs protesting Doria’s crackdown.” 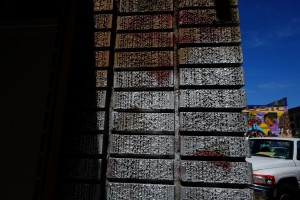 There are other, more typical, problems with abatement as well. Oakland’s Graffiti Removal Program is administered by Public Works, which doesn’t keep any public records of what has been abated, or how many times specific locations have been abated (and re-abated) in any given time period — making it difficult, if not impossible, to assess the cost-effectiveness of the program. And although many vacant, foreclosed houses have become targets for tagging and illegal dumping, no action has been taken to levy fines against the banks which own these properties by the City Attorney.

Private abatement can also be problematic. Abatement workers may not have matching paint, which results in blotchy eyesores which may invite more taggers — a phenomenon known as creating a “secondary canvas” in abatement circles. Astoundingly, some contracted graffiti removal crews have been accused of overcharging cities; others have been caught painting graffiti themselves in order to give themselves work. (Perhaps non-coincidentally, both instances were liked to the same abatement firm, Graffiti Protective Coatings, Inc. — whose annual revenues are estimated at $4.2 million). 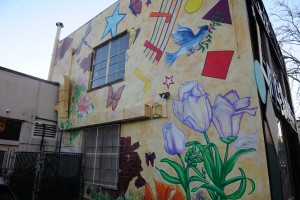 Even worse, some self-styled private abatement organizations purport to be authorities in graffiti removal, yet don’t come close to following best practices — the East Oakland Beautification Council, for instance, not only violated Department of Justice guidelines against glorifying graffiti by promoting an unsupervised wall within its abatement footprint, but has made presentations before City Council featuring “expert” testimony– by someone with no background whatsoever in abatement or even graffiti ethnography. CRP has even heard stories about one gung-ho private citizen who impersonated a city worker, and illegally directed actual city workers to buff out legal, permitted murals.

Formerly a tagging hotspot, the walls at 14th and Alice have required little to no maintenance over a three-year period. (Eric Arnold/CRP)

There may an alternative solution, however: shift some of the money allocated for graffiti removal to a citywide mural program. Now might be a good time to consider this move, since Oakland is currently going through its biannual budget allocation process.

(Note: in Part Two of this series, we look at the many benefits of murals and analyze the potential impacts and outcomes of a city-funded mural program.)