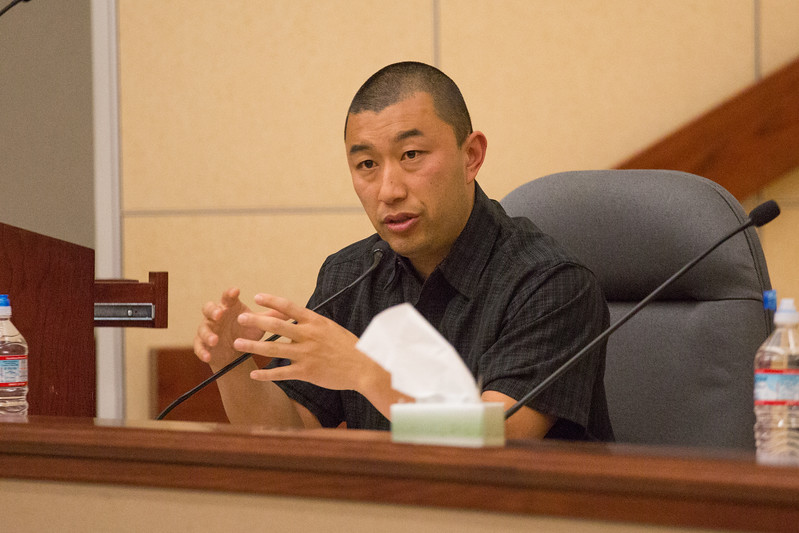 On Friday, April 7, the Community Rejuvenation Project (CRP) presented the first in a series of planned symposia. Sponsored by the Akonadi Foundation and Assemblyman Rob Bonta’s office, the Alice Street Symposium built on an engaging event and panel discussion held during the Matatu Festival of Stories in 2016, Shifting the location to the auditorium at the Elihu Harris State Building lent the proceedings a more formal, official air, which underscored the political relevancy of the topics discussed. 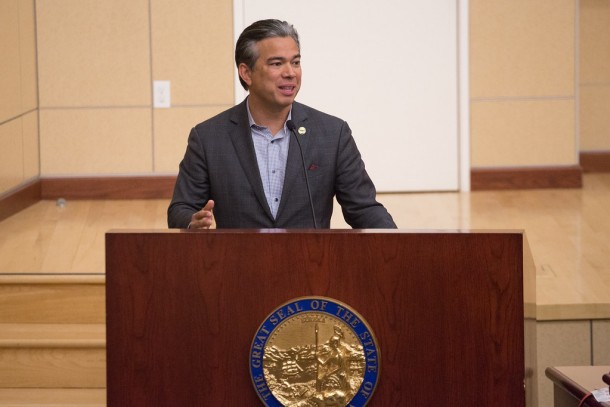 Assemblyman Bonta kicked things off with a short address, in which he praised CRP’s efforts toward liking art and public policy and the cultural resilience of community-led organizing. Bonta’s address was followed by a brand-new cut of the “Alice Street Short,” a preview of the full-length documentary “Alice Street,” currently in post-production and slated for release later in 2017. As CRP Communications and Policy Director Eric Arnold explained, the film tells the story of a mural addressing cultural resistance in the face of displacement which ironically becomes a symbol of displacement itself – and catalyzes a community-led movement for equitable development.

Filmmaker Spencer Wilkinson further explained the film’s arc, and his creative process in interviewing culture-keepers from the Hotel Oakland and Malongqa Casquelourd Center, during a brief Q&A.`

CRP Executive Director and founder Desi Mundo, the mural’s co-lead artist, followed with a presentation addressing the innovative community engagement model employed during the making of the mural, and how public art can either support gentrification (by being unaware of cultural history and neighborhood sensibilities), or promote resilience (through listening to, and incorporating community feedback). 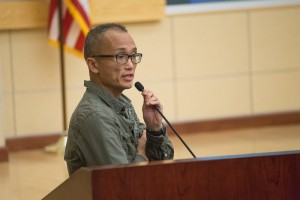 Another Q&A followed, highlighted by a city abatement worker, known as Erase, who advocated strongly for CRP’s community mural model, as an effective alternative to simply buffing over walls repeatedly.

Roy Chan, of the Chinatown Oral History Project, led another presentation which told a community story, about the resiliency of tai chi practitioners in Madison Square park, with a personal aspect (Chan’s late father encouraged young Roy to join in practicing tai chi in the park). 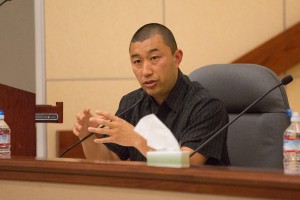 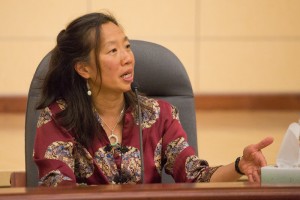 Margaretta Lin of the Dellums Institute. Photo by Daniel Zarazua

What was perhaps most remarkable about this panel was the amount of common ground between the panelists, even though not everyone shared the same perspective. At one point, Chiu explained the cyclic aspects of gentrification and displacement, as they relate to fluctuations in supply and demand of housing stock. Lin, however, insisted that these outcomes weren’t necessarily inevitable, but resulted from the lack of political will to uphold equity in legislative policies. Nzinga made a passionate appeal for equitable development and cultural retention as a counter to population shift, while Beavers praised the role of the cultural arts in community organizing efforts, and spoke a bit about Greenlining’s campaign to advance equity-forward diversity initiatives within companies like Uber. 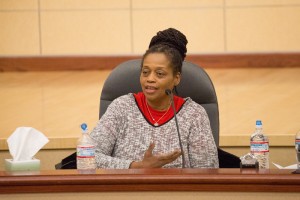 The event was an overall success, which established a new benchmark for CRP’s policy platform, shared best practices for community engagement,  and illustrated both diversity and advocacy in effect. The symposium also demonstrated why CRP’s “pavement-to-policy” approach is an especially appropriate methodology for addressing equity concerns: aligning with grassroots-level organization is consistent with the bottom-up approach to equity matters often advocated for by community. Yet taking grassroots concerns all the way to the state building further aligns neighborhood efforts for equitable development with progressive proposed legislation, such as the new bill Bonta is sponsoring which could repeal anti-rent control laws, reinforce tenant protects, and ultimately greatly expand the ability of citues like Oakland to enact affordable housing mandates. 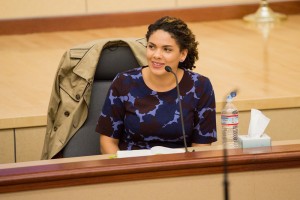 CRP plans to host further symposia in the months to come; community members, advocates, and public officials are encouraged to follow CRP on Facebook and keep watching www.crpbayarea.org.