Desi Mundo Breaks Down the 360 Mural

HomeDesi Mundo Breaks Down the 360 Mural 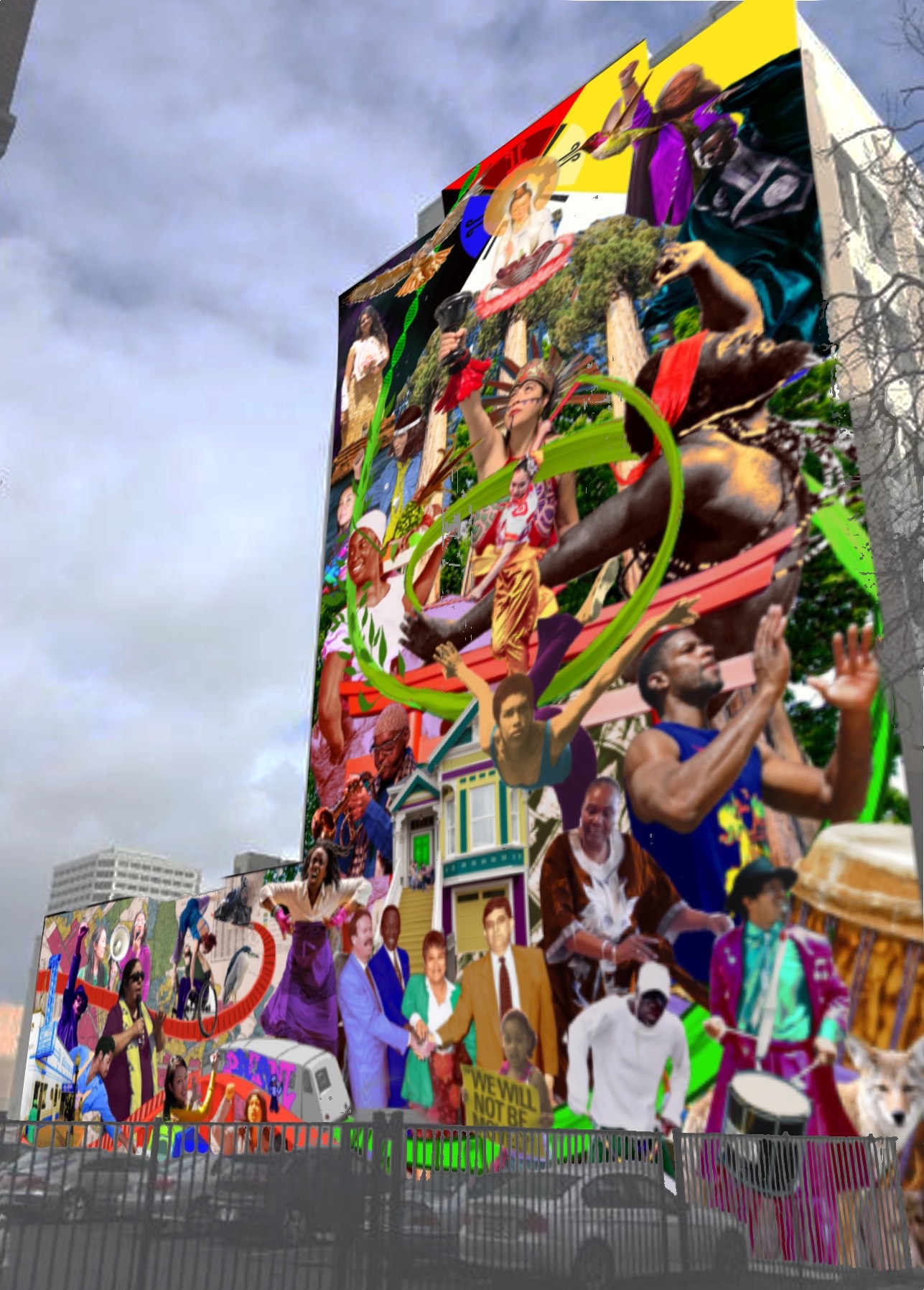 The Community Rejuvenation Project’s highly-anticipated collaboration with The Greenlining Institute, the “360 Mural,” has completed its community input and design review phases. Now it’s on to the actual painting, which begins May 18.

But before that happens, we thought you might enjoy a sneak preview of what the finished design will look like, as well as a breakdown of the images, people, and symbolism contained within.

Here’s a mock-up of the design:

A front-facing view of the same image:

Here’s a detailed description of the artwork from CRP Founder and Executive Director Desi Mundo, the lead artist for the project:

“The mural begins [in the lower left-hand corner] with a locomotive on a red track traveling a redlining map of Oakland. The train recalls the history of Chinese and African-American labor that built the tracks, as well as referencing the early Pullman porter jobs that brought the first generation of African Americans to Oakland. Railroads have contradictory meaning throughout the mural. They connect the communities along the route while at the same time dividing them.

“The track passes a black-crowned night heron (these birds were displaced from the trees across the street from the original ‘Universal Language’ mural). AXIS dancers perform on top of the tracks, representing the struggle, resilience and beauty of the disabled community in collaboration with their able-bodied allies. Carla Service and Lailan Huen speak out on the microphone (originally at the protest to save the ‘Universal Language’ mural), representing the unity formed between the pan-Asian community and the Afro-Diasporic performing arts that took place through the original mural.

“The track dips off the wall and swings in front of the Slim Jenkins Supper Club, representing historic 7th Street in West Oakland. A Black Panther shouts and puts up the Black Power fist, while another Panther reaches across the tracks to offer food to a homeless encampment.

“Greenlining alumni and SF Supervisor Jane Kim and aerosol legend Mike Dream (RIP) paint the BART train with the word ‘DREAM’ to transform the train line from redlining to Greenlining. ‘DREAM’ is a message for the future generations to think outside the box and reach one’s maximum potential. Behind the train, Latanya Tigner of Dimensions Dance Theater uses her dance to connect with her ancestors and “get free,” while Khalil Shaheed (RIP) of Oaktown Jazz Workshop plays his horn.

“The new green train line passes Greenlining‘s founders and early core leadership, Bob Gnaizda, George Dean, Ortensia Lopez, and John Gamboa. They stand in front of a West Oakland victorian home, occupied by a multi-racial family, Arjuna Sayyed and Christina Chung, and their two children, Djumi and Toqhi. A young child in front of Gamboa from the original protest to save the Alice Arts Center reaffirms that “We Will Not Be Moved, ” while “King” Theo Williams of SambaFunk, along with Carlos Aceituno (RIP) of Fogo Na Ropa, drums to call the community in. A coyote from the Ohlone oral traditions stands guard in the corner. Behind Williams, Mama Naomi Diouf, artistic director of Diamono Coura, dances.

“Just to the right, Kiazi Malonga drums for his father Malonga Casquelourd, whose back and chest arch along a green ribbon which has evolved from the train track, representing culture moving in a spiral.

“At the center of the mural, a Chinese ribbon dancer spins the ribbons connecting the past to the future. She stands on the back of a young Dr. Halifu Osumare bending forward in an acrobatic dance pose. Behind the ribbon dancer, Mexica Azteca Danzante, Julia Sabory of Danza Xitlalli  offers traditional copal smoke to the universe as part of her dance prayer. As the ribbon moves to the left, it wraps around Miss Ruth Beckford (RIP), recognized as the godmother of Oakland African American dance.

“The ribbon transforms into a vine, representing nature, new life and continued growth. The ribbon passes Richard Oakes (RIP) , an original leader of the Alcatraz Indigenous Occupation (and the Indians of All Tribes) that sparked an indigenous cultural awakening, and Morning Star Gali, who is a leader in maintaining the annual ceremonies there. Behind Alcatraz stands Jennifer Ana Finefeuiaki (RIP), a traditional Tongan raised in the Bay Area, representing the connection across the Pacific Ocean between California tribes and Polynesians.

“The ribbon becomes a DNA strand as it moves off the wall, representing the resiliency and possibility embedded in the community. A redtail hawk, sacred to the Ohlone, flies over the people, representing the connection between heaven and earth.

“The hawk blesses the Hunan Ku, a Mayan symbol of duality, that serves as a halo for Quan Yin, a Buddha who reached enlightenment, who sits on the crown of three redwood trees, praying for the future — represented by a baby in a traditional Ohlone ceremonial gift basket. A hummingbird, who brought fire to the Ohlone, pollinates the Hunan Ku, while Terry Bautista, a founding member of Filipino Advocates for Justice, puts her fist up in solidarity, representing the slogan ‘All Power to the People.’ Just below her, Diamono Coura founder Zak Dioug dances.”

Well, there you have it.

This project is supported by the California Arts Council and Creative Work Fund.

Visit this site for regular updates throughout the production process.