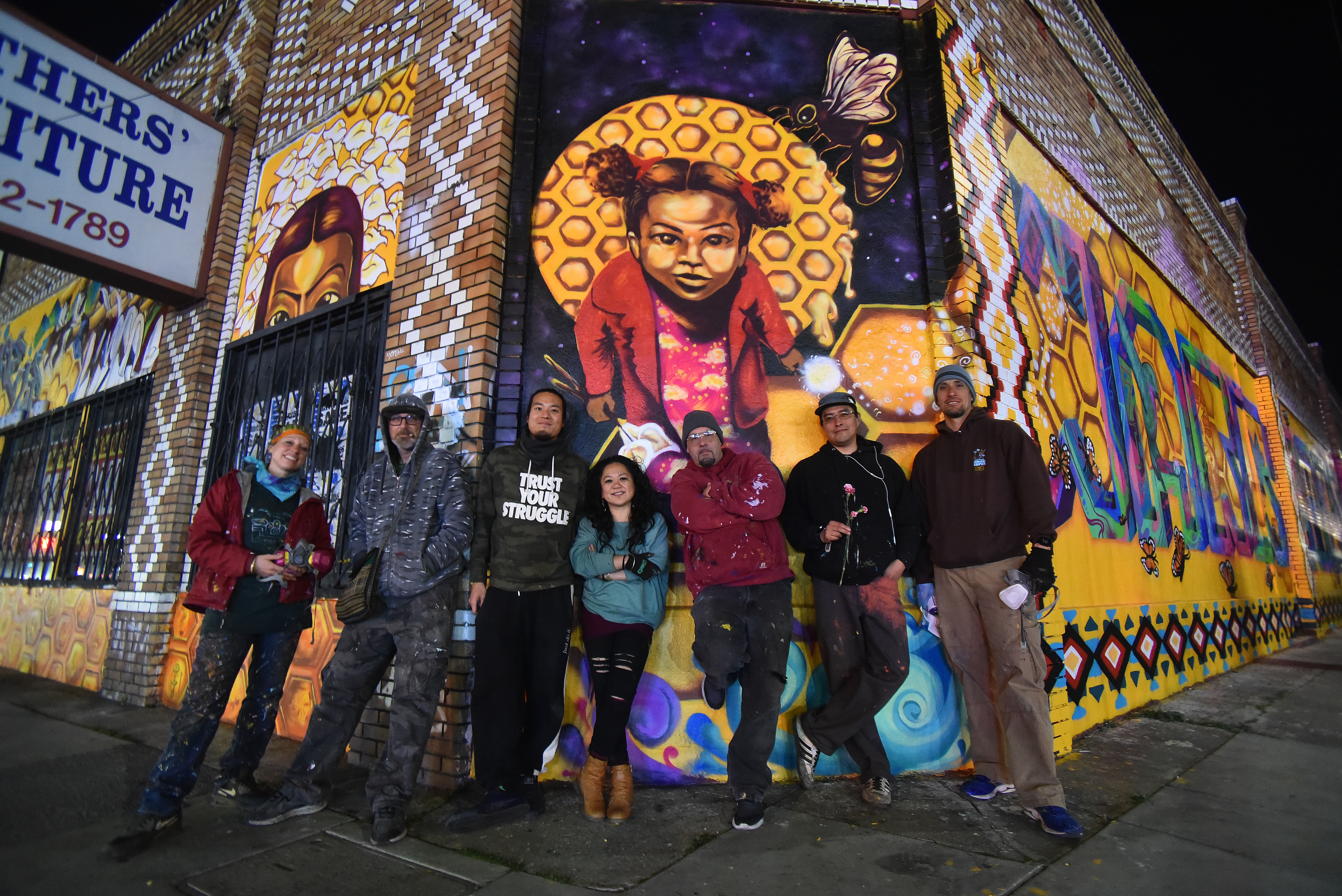 Recently, CRP got a call from Oakland’s District 6 Councilmember, Loren Taylor, about a new anti-blight mural opportunity in East Oakland. To avoid fines by the City for unsightly tagging at a vacant site, the property owner wanted to commission some public art.

The only catch? The mural had to be completed within 48 hours.

As CRP Executive Director Desi Mundo explained, “Loren [Taylor] had been in a conversation around painting in this area for a long time. We had connected while I was looking for a site for my wife, Jennifer. We’d discussed this wall and made contact with the property owner. I was anticipating that the project wouldn’t take place for several months because of the bureaucracy around contracting the project through the city. So when the call came to do it in the next two weeks, my schedule was already booked. We had two days to organize the project and get the supplies and another two days to complete the piece. Fortunately, the team that we pulled together was some of the Bay Area’s top talent, and we all stepped up to the challenge.”


“This has been a great location. This has been a very epic and exciting street. There’s a lot of foot traffic, car traffic. Everyone stopping by to come and say ‘hello’ made me want to paint something that reflects the community here” — CeCe Carpio

Mundo quickly reached out to fellow muralists and asked them to collaborate on the project — located at 72nd Avenue and International Boulevard, just east of the Coliseum BART — a largely Latino and Black neighborhood which is undergoing a transition as AC Transit’s BRT project takes shape.

What resulted was possibly higher than expectations going in.

Despite the short window of time to get it all in, the mural process flowed smoothly. Everything came together as the artists went about their business of transforming a blighted storefront into a neighborhood treasure. Buoyed by an unintentional soundtrack of traditional Guatemalan music courtesy of a live band emanating from a church across the street, the painting crew rolled up their sleeves, primed their spraycans, and hoisted up their ladders.

Throughout the process, passers-by offered mostly-positive commentary  and encouragement as the mural took shape. By the end of the second day, some were already offering referrals of nearby walls.

The finished mural, “Warriors,” injects vibrant colors into an otherwise-drab intersection, backgrounded by a high-intensity orange over which letters, portraits, and scenes were laid. There are recurring motifs of bees, honeycomb, and butterflies, along with an afro-puffed young Black girl, a stunning indigenous woman in dazzling headgear and regalia, a figure with a human body and a feline face (representing the Black Panthers), a depiction of Mexican revolutionaries marching, and a Native American medicine wheel representing the four directions.  A calligraphic script on the International Boulevard side of the block spells out an additional message: “Rise Up.”

“This was one of those crazy projects,” said Pescador, adding he was honored to have been part of the mural.

“We–I dont want to say ‘rushed it’–we acted really fast in deciding what we were gonna paint. And we had a short amount of time to [think] about it.”

In Chilean-inflected English, he noted the collaborative process was an enjoyable one. “I love the team. I think we had a fantastic team, you know, some hyper-talented artists. [It was] such a blessing, people showed up out of the blue,  they wanna help, you know, that’s beautiful. The mural is vibrant, and I think definitely, it’s an add for the community. I’m excited [to do] more of this [type of work].”

Carpio called out some other interesting dynamics of this mural, from the neighborhood’s characters interacting with the muralists, to the sights and sounds of a busy, multicultural, and urban place-setting.

“Man, this has been a great location. This has been a very epic and exciting street. There’s a lot of foot traffic, car traffic. And everyone stopping by to come and say ‘hello’ made me want to paint something that reflects the community here, so I painted a young girl. Everyone seems to be able to connect and relate.

“Because she is who she is. She’s holding flowers and surrounded by honeycombs, and pollination right now, it felt like folks can kind of relate to the fact that it’s a young Black girl, right here in the middle of Oakland, kind of just  a celebration of life.

The team work, she related, was indeed tangible. “E here has been my mentor” — she points at Spie, who’s perched on a ladder, filling in an outline. It’s a slow and careful process, complete with occasional commentary about the sheer physicality and spatial awareness needed to do ladder work.

“I’ve painted with [Spie] a number of times. And T, who is the youngest member of Trust Your Struggle, came by to help out. And Desi and Pancho, we’ve been talking about this for a while, to be able to go and paint, and they’ve been very generous. The time to paint, the assistance to help, I think everyone’s just really got so much love for what it is. So we do want to be a team, [we] want other folks to be able to do it with,  It’s such a crazy feat, of trying to paint this wall in two days.”

Her laugh is somewhere in-between a guffaw and a chuckle.

“I thought it was impossible until I seen it done. At least, something presentable,” she adds.

“Warriors” sets a precedent for what hopefully could be a flourishing of culture in District 6 — one which embraces murals as part of the visual landscape and community gravitas.  At the least, it’s a welcome change from former Councilwoman Desley Brooks, who was so unenthusiastic about murals, she never commissioned the $50,000 allotment D6 received for abatement murals  way back in 2013. (Since then, tagging has continued to proliferate throughout Oakland, and the City’s Graffiti Abatement Unit is reportedly down to one employee on the verge of retirement.)

it’s encouraging that new Coucilmember Taylor is beginning to take initiative to create more-visible culture and more attractive neighborhoods — especially since creating murals as abatement mitigation is a longstanding best practice CRP has advocated for.

The results not only speak for themselves, but suggest that other blighted locations in the Deep East could benefit from the same treatment. And while some recent murals (in downtown in particular) have shied away from cultural statements and social commentary, “Warriors” doesn’t downplay this aspect of the community mural tradition. It’s a splash and a slam dunk.