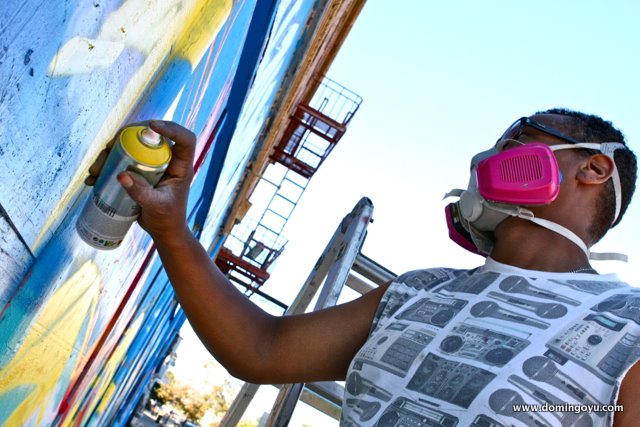 Over the past weekend, Community Rejuvenation Project was blessed to collaborate again with Lavie Raven, a master aerosol writer from Chicago. One of the fastest and most efficient writers that we’ve encountered. Raven is also an innovator in the world of Hip-Hop Education. A Co-Founder and Director of the University of Hip-Hop, Raven has been teaching youth the techniques of aerosol painting for 20 years. CRP founder, Desi W.O.M.E, was one of his students beginning in 1993. The University of Hip-Hop incorporates the other three elements of hip-hop including emceeing, deejaying and breaking as well. UHH is a program in numerous schools and community centers, including partnerships with Connect Force, the massive hip-hop program on the north side of Chicago. Raven is on the board of directors at the Southwest Youth Collaborative, which is home to the original University of Hip-Hop classes. Raven’s art have taken him all over the country and to several countries. He regularly visits the Community Rejuvenation Project, at least once a year for the past four years. Raven’s presence brings new energy and guarantees the creation of at least one mural over the course of days. Kilumbo Warriors, Respeta Tonantzin, and the 2009 Summer Youth Employment Program are just a few of the projects that Raven has participated in. He has also facilitated several cultural exchanges for youth between Chicago and Oakland. In 2012, CRP is looking to expand their collaboration with Raven and the University of Hip-Hop to four visits throughout the year.