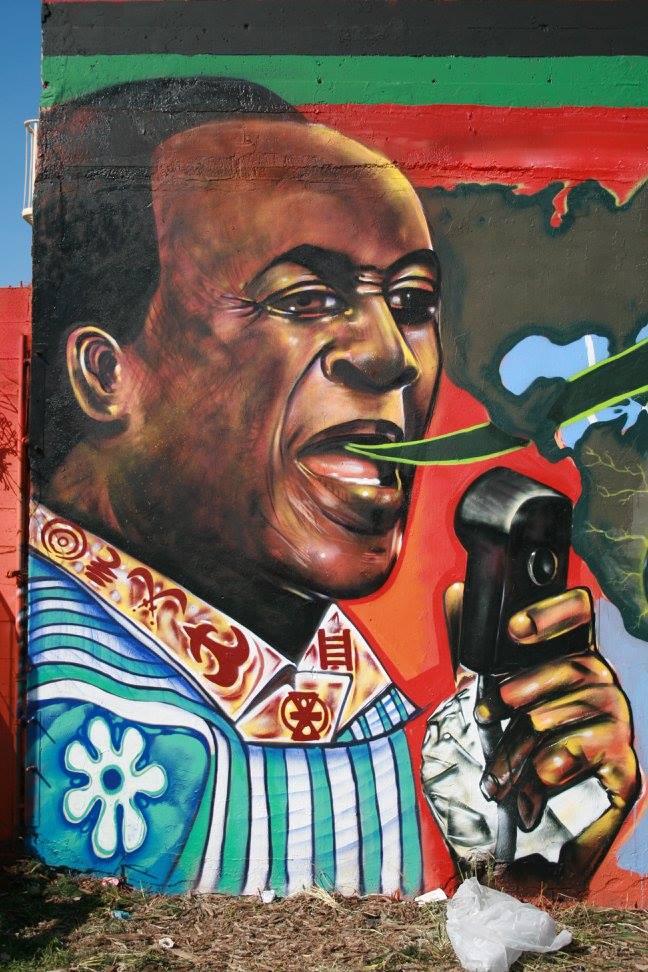 In February 2015, I finally made my way to the West Coast, after years of talking about visiting. A few weeks before my scheduled takeoff, my friend and artist, Leon Rainbow, told me about an organization based in Oakland, CA that did similar work to that of SAGE Coalition.

The Community Rejuvenation Project, or CRP for short, is a pavement to policy 501(c.)3 non-profit organization that cultivates healthy communities through public art, beautification, education & celebration. I found their mission to be very similar to that of SAGE, so I begin to research the organization further. 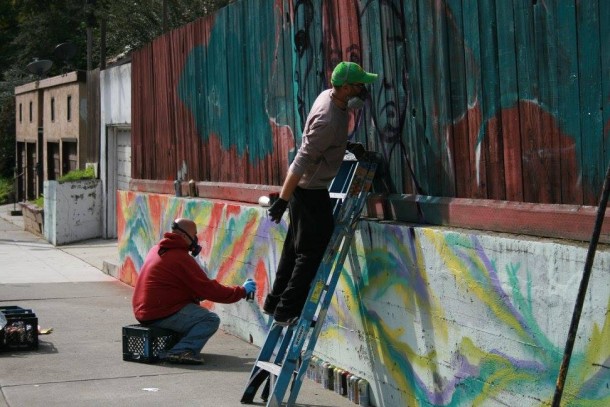 I begin to correspond with CRP’s founder, Desi Mundo and he gave me a detailed history of CRP origins and future goals regarding public art. Originally from Chicago, Illinois, Desi Mundo has been a staple in Oakland for the past 15 years. He started CRP because he realized their was a void within undeserved communities around public art and its power to manifest ideas and bring people together. CRP has murals throughout the city of Oakland and also works with community members and youth doing after-school programming. The organization trains youth in the application and process of aerosol painting and also teaches the history and culture of graffiti through its many community-engaging mural projects.

Once I touched down in Oakland, I linked up with Desi and artist/muralist, Pancho Pescador, who is Desi’s right hand man in most of his murals. Pancho, originally from Chile, is as prolific and Desi. Pancho works closely with CRP and also independently. His work is surreal in nature, centering mostly of animals, indigenous cultures and political subject matter.

Our first mural together was pretty loose in theme. I painted my traditional abstract designs,and images of animals, particularly a quail, cat and whale, while Desi painted the letters “EVOLVE” at the base of the mural. Pancho handled the center of the wall with his amorphic animal/human figures, which balanced out the wall.

From there, we moved on to our second mural. This mural was for the radical community social center, Qilombo, based on the west side of Oakland. Qilombo is pushing the initiative of “AFRIKATOWN,” which encompasses 17 square blocks of real estate on San Pablo Ave. in West Oakland. The mural we produced centered around this initiative, with images of Kwame Nkrumah, who led Ghana to independence from Britain in 1957 and served as their first prime minister and president. Imagines of members of the BLACK PANTHER PARTY and a portrait of Nobel prize winner and Kenyan environmental and political activist, Wangari Maathai are also present. 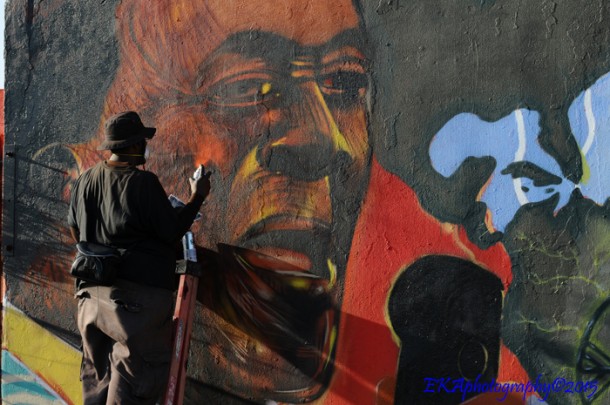 The first day of painting, the entire community came out to participate. Members of Qilombo hosted the day’s festivities with a community BBQ, while others took part in painting and gardening activities. Desi, Pancho and their students handled most of the imagery on the wall, while I focused my attention on the portrait of Kwame.

The next day focused on tightening up the mural, finishing details and vibing with members of Qilombo, some of which include Keka Grant and Linda Grant, aka”Sistah Struggle.” 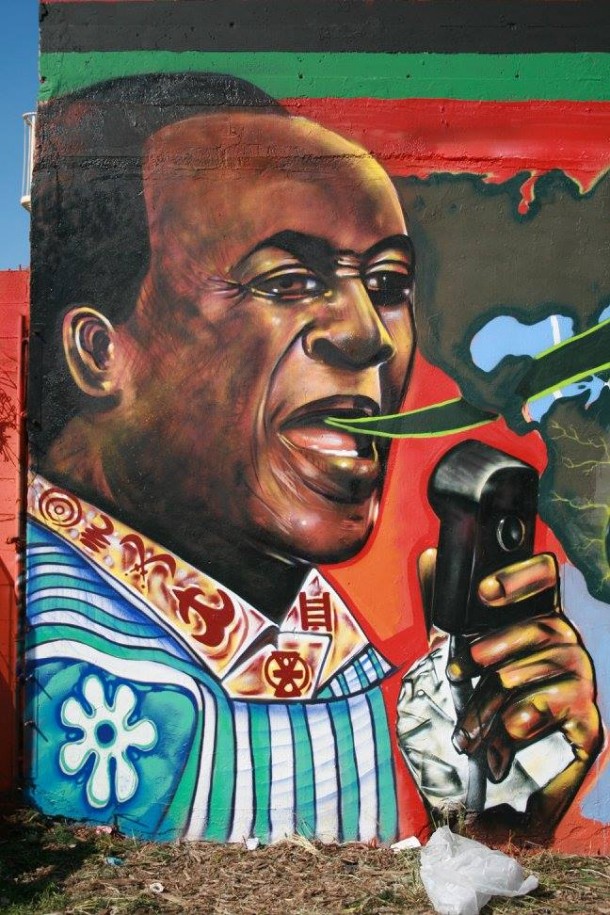 I had to leave before the mural was competed, but Desi and company took care of the rest and sent me finished shots once completed.

Fast-forward to Aug. 2015. I’m based in LA (Culver City) and I received an email from Desi saying he has a project he would like me to be apart of with him and Pancho. Desi’s mentor RAVEN and a few of CRP’s students would be joining us as well. I take the megabus up from LA, arrived in Oakland on a early Sunday morning, and began to paint. The mural had no particular theme, just a mash up of artists and there trademark designs. We were redesiging a mural that had been destroyed over the past three years with tags. Desi, RAVEN, and RECO (a graduate of CRP’s after-school programs) produced massive burners with accompanying characters painted by members of CRP. Pancho painted a massive portrait of a woman smoking a joint, and images of a tiger and bear, which balanced out the burners floating above them. 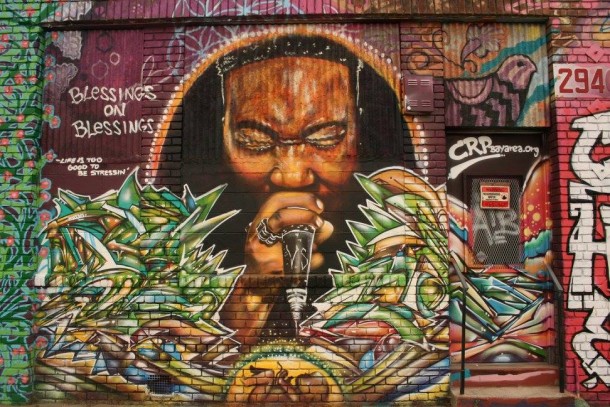 I painted an image of Trenton emcee and member of SAGE, Black Collar Biz, from an photograph taken by photographer, Jimmy Giambrone. In the painting, I represented Collar rhyming to his unborn child, surrounded by abstract, colorful designs made to resemble a nest. The theme is a take on Collar’s current situation: him being a father to a newborn baby girl. Che crew member I-rot produced a massive image of an Ethiopian woman staring off into the distance, while another artist, “Abakus,” produced the frame of the mural with his abstract floral designs.

We worked on the mural for approx five days, touching up and tightening up areas as we went along. During the final phase of the mural, Pancho got permission to rock some garage doors. At the urging of a few Oakland locals to see more images of people from their community represented, we decided to paint images of Oakland legends, local and mainstream.

Desi painted an image of RADIO MAN, a fixture in West Oakland, known for riding his tricked-out tricycle everywhere he goes. With old school hip hop and R&B blasting out of the back, he is one of the more well-known local celebrities, having been featured in print ads and movies the like. Pancho painted an image of late rapper/actor/activist Tupac Shakur, while I produced an image of local roots and reggae singer, Jennifer Johns. After that, myself and Desi decided to cap the week long marathon of painting with a quick collaboration piece, located on the side of the building. Beside working next to a pile of human feces (and Desi cracking his phone after dropping it on the ground), we had a great time. 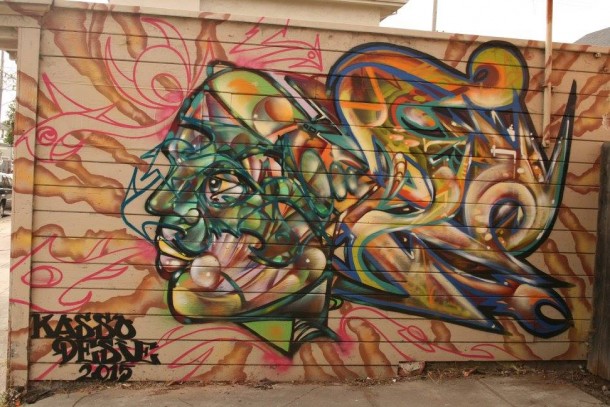 Out of all the places I’ve traveled to, I can honestly say that the sheer level of Graffiti in Oakland is incredible. Everything from tags, throw ups, burners, productions and traditional murals — Oakland has it all. I see why it’s called “Graffiti Heaven”; Graff is everywhere! It’s inspiring and overwhelming at the same time. Even though this was my second trip to the Bay Area, I’ve still only seen a fraction of it and only hung out with a small number of writers. I’m looking forward to going back again in the near future and learning as much–and painting as much–as possible.